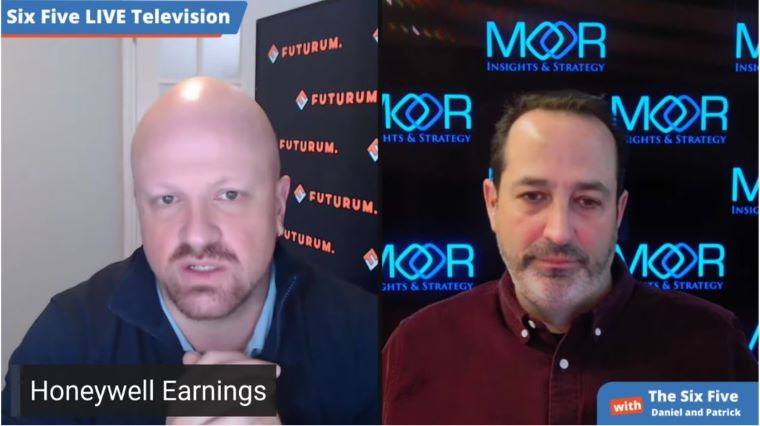 Daniel Newman: So let’s pivot to something that’s a little bit, I would say a company that you and I talk a lot about that I feel like we’re constantly sort of introducing to the tech community, a company we’ve worked with on a number of different fronts that also reported this week, and that’s Honeywell. I don’t want to really spend a ton of the time on this show talking about the materials business, or the safety business, or the mask business, because that’s not why two tech analysts get on and talk about Honeywell. I think what I really want to just take a few minutes to talk about is sort of the way the company is perceived in the market.

So Honeywell is a value company. I did a MarketWatch piece where I looked at some of the different companies that are both tech and value, and I noted that about Honeywell. And Honeywell came up a little short on their revenues and their guidance, and that caused, for Honeywell, a very significant sell, I think it fell like six or 7%. And Honeywell falling six or 7% is kind of like Meta falling 30%. Companies like Honeywell don’t move that much and they’re seen as value plays, and they’re dividend plays. But what I’ve really been watching for with this company has been how it’s been approaching and being appreciated for what it’s trying to do in technology.

And I’ll sort of break that into three different pieces. The first piece has been recently spun off, which was the quantum business, which was a very interesting path the company went down. And now they are the biggest investor in a company called Quantinuum, which is a private company that I believe at some point will come back public, but at this moment in time, they’re acting as the investor. But they’re using their experience in the controls business to actually participate in a growing opportunity, which is quantum. But we’re going to sideline that one for a little while until we figure out what the plan is, are they going to de-SPAC, are they going to IPO? But that’s what’s going on with Quantinuum, and Quantinuum is a really interesting company, because they’ve definitely been on the leading edge of a number of different quantum breakthroughs, of offering the first available as a service quantum software in security. So they’re doing some interesting things. But like I said, right now, since we’re talking Honeywell, Honeywell’s specific role here is playing investor at this moment in time.

And the second and third tech overlaps that I really believe need to be given attention is Honeywell as an edge IoT and software provider. So when you think about where all the data that comes into our systems of record, you got ERPs, you got CRMs, you’ve got smart cities, smart grids, automotive, jet engines, and planes. All that data, companies like Honeywell have a really unique position. So they have what’s called their Forge software, and Forge has really been working closely with companies like SAP and like Microsoft, your traditional IT systems of record, to basically grow and create more validity in the market as a software and data company.

Now, it’s still early, but it is passing $1 billion in revenue, this part of the business for Honeywell. And over the last couple of quarters, I’ve had multiple opportunities to sit down with their leadership, including a recent pod I did on Making Markets, the less cool podcast I do, because Pat isn’t with me on it. But I talked to Darius Adamczyk, the CEO, and I talked a lot about that, the pivot to software is going to be a huge one for the company, because if they ever want to be appreciated like a tech company and get the valuations of a tech company, they’re going to need to be seen as one. And I will say, to date, it’s still pretty nascent to most of the market, but it is an opportunity. Forge, the edge business, IoT, smart buildings, technology, technologies that help keep buildings safer, those are the kind of things that they’re going to be leading the way on.

And the last thing, Pat, and I think you and I have both written a ton about this worth talking about is ESG. There are going to be two kinds of ESG companies. There’s going to be companies that provide the analysis and data visualization, and those are going to be a lot of the traditional ERP companies that we know. We’re going to see solutions from Salesforce, ServiceNow, SAP, Oracle, Microsoft, they’re all going to have technologies that are going to help companies measure their ESG efforts, their sustainability efforts. Honeywell is uniquely positioned because of where they play in the materials space to actually enable companies’ ESG initiatives. So they’re going to be playing a little bit higher up the stack in terms of helping the market and helping technology companies that have made these bold, market-facing statements about their ESG strategies to help them actually achieve this through sourcing, through materials, through materials planning for their products and solutions, and that’s going to be an interesting money-making opportunity for the company, is something that they’re going to focus on more and more.

So the numbers themselves, this quarter was not great, the guide was not great. But the question, and what I’m really looking for in the company is can they make this pivot and can people start to finally recognize what they’re doing with Forge, with software, with ESG and sustainability in a meaningful way, I would say that answer is not clear yet. That’s going to be up to leadership to really tackle that, but I do think it’s a big opportunity.

Patrick Moorhead: Bro, you stole every piece of thing I was going to talk about, but let me do a quick …

Daniel Newman: I was trying to think of things.

Patrick Moorhead: No, no, no, no, it’s fine. So a couple things I really appreciated was if you look at the lower right hand corner, there as a breakout of some of the financials here. And what you see here is net P&L investment of $60 million in 2021, that’s code for 2021 loss, and 150 million loss in 2022. And that’s, by the way, that’s called investment. And also we saw a sales figure of $20 million for 2022, and it looks like, a margin improvement of 30 BPS means that they’re at least making money at the gross margin level, and I really appreciated that.

To your point about sustainable, check this out. Here’s the deck, here’s slide one and slide two. And listen, many of you might be bored with some of the ESG stuff, because quite frankly, every company tries to convince Daniel and I that they’re an ESG company, okay? Here’s the difference. Honeywell is different because they are literally at the epicenter, and I would even put SAP in here as well, they’re at the epicenter of where the ESG action is, okay? And I’m just going to say it: the people who create the pollutants or the energy, right? Cars just don’t show up, okay? They need to be manufactured. And at the center of buildings, at the center of factories, at the center of airplanes is Honeywell. And not only with the sensor systems, but also with the energy storage systems, with the material science and plastics that go into it.

So a lot of companies are talking about ESG, but Honeywell’s one of these companies that’s literally in the center of it with the companies that need to make those changes. And on top of that, which Daniel talked about, is their Forge platform that then puts a data analytics capability on top of the data that are captured with their sensors, that they have a pretty robust ecosystem for, including SAP. So there we go, Daniel, I was able to squeeze something out of that.

Daniel Newman: That was pretty good, actually. You went a layer deeper, kind of gave people the what in terms of what are those things, those sustainable data points that the company has, the fuels, the buildings, the materials, all those different things. I think visibility to that is super important. And I like that you mentioned the hybrid infrastructure. So not a beat back or a circle back there, but you actually, you underestimated yourself a little bit there. I think you had more in your pocket than you wanted to admit. So-

Patrick Moorhead: I tried, buddy. I was sweating that. You were going through that, I’m like, “Man, I was going to talk about that.”

Daniel Newman: But you know, off the record, and this is the off the record on the record, because we’re live, so people can hear us. But I said to you, Pat, I’m like, “Honeywell’s quarter didn’t give us a lot from a tech angle,” and then somehow we managed to spend like eight minutes talking about it. So that’s why the Six Five is nothing more than theoretical at this point.