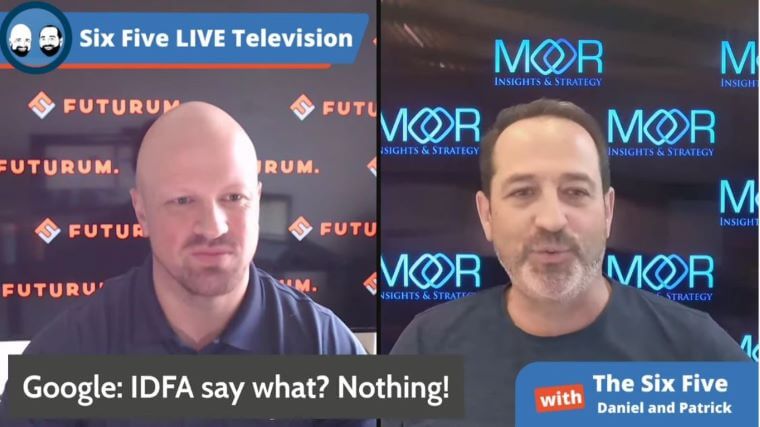 Patrick Moorhead: But I like to talk about Google cloud because we are tech analysts and Google is growing on a rate that is faster than any of the cloud giants, albeit on a smaller base. But Daniel, I know you and I both appreciate that at least they’ve carved that out.

Now, we don’t know how much of it is IaaS, PaaS, or SaaS. My intuition tells me there’s a lot of SaaS when you have things like workspaces out there and they are significantly stomping on the gas pedal from an IaaS perspective. They grew 53%, but their losses were significantly narrow here. And Google is on the run here.

We’ve got three huge players at the top there with AWS, Microsoft, and Google, and a lot of powerful folks who are vying for those fourth, fifth, and six spots, when you’re looking at folks like IBM and Oracle. I can’t put SAP in a cloud spot because technically they don’t actually stand up their own clouds. So I’d have to probably put Salesforce in there.

Daniel Newman: Yeah, I mean, look, across the numbers 61.88 against 56. The earnings were just absolutely mind boggling. I mean, look, I’m putting this out there, Pat. Wall Street in some of these cases has either become clueless, they’ve lost the plot, they have no idea what’s going on, they’re completely sandbagging for some reason or another, or don’t understand the technology and the market and the transitory and secular demands that are going on in the marketplace.

They could not … I mean, first of all, how do you miss by like 40% when your one job in most of the cases of these guys is to get that right. They’re guided all the way up to the end. And so you come in at 27 plus against 19.

And by the way, this is what happened with AMD. This is what’s happening with Qualcomm. This is happening with Microsoft. These overshot. Like I said, I don’t think these companies are not trying to project correctly. I think they always want to outperform.

We also are seeing a market now where even when you do perform, the stock sells off and the prices drop half a percent on average on an earnings beat. So the demand for digital in technology is massive. And I know we’re techs so tend to focus on cloud. All of this stuff is tech.
So going back to this info say what? We had heard that apple, by making it harder, to in more forcing greater amounts of opt-in that all the other advertisers were going to get hurt. Google is clearly above the law here. Google said, you know what? I know you’re Apple, but we’re Google and you aren’t going to stop us from growing.

They’re guiding forward strong. Their traffic acquisition costs are not much higher given the growth in revenue. YouTube, I think is on pace to be bigger than Netflix. I read this. It’s about to surpass Netflix. So what’s the story here? Google’s on fire. Google is absolutely on fire. And I don’t see that changing anytime soon.

Cloud is probably. I know we get most excited about it. You and I like to debate this one a little bit. I think cloud is going to be the one they’re going to have the hardest time on because Amazon’s even more on fire and Azure is doing a pretty darn good job itself. Maybe we can talk about that.