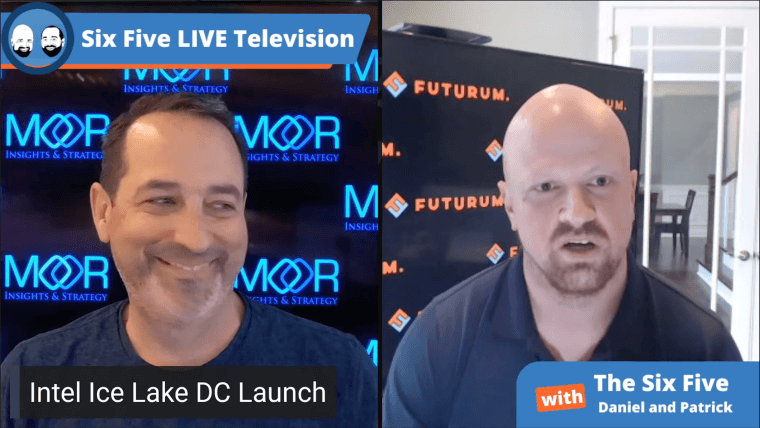 Daniel Newman: And so Intel, which has been a regular topic for us over the last several weeks, because it’s just had a ton of big breaking stories. A few weeks ago was their big IDM 2.0 day launched by Pat Gelsinger. Recently Navin Shenoy and Lisa Spelman came back to announce a much awaited Ice Lake, which is their third generation Xeon, scalable solutions for the data center and beyond the edge in the cloud. I just want to point that out. But Pat, we talked a lot about it. I do want to give you some kudos. I wrote a quick piece about it. It’s in the show notes. But you wrote actually one of my favorite pieces I’ve had you write, because this is a very nuanced topic, potentially as nuanced as the Amazon topic in its own way. Because you really are talking about companies making major investments. This is a breakthrough moment, there’s a lot of positivity, but at the same time, there’s still some tech leadership issues that it hasn’t necessarily caught up to some that have leapfrogged in certain areas, and you did a really good job of breaking that down.

Patrick Moorhead: I appreciate that Daniel and I can’t say how meaningful is it to me for kudos on the article. I don’t always get it right. But sometimes I do. So let’s talk about Ice Lake here. So just a little bit of a background. Intel, while it has around a 35% data center, which is you know, server storage, networking and security. It has a 90% server market share out there and the announcement on their latest Gen Xeon scalable processor plus some new memory options for Optane. Combined with things like Agilex, FPGAs and networking, Intel really lean into their strengths and think well I’m going to do like I did in our longer podcast, just talk about what wasn’t in the releases, and I think explain some of the unwritten elements of why Intel still does so well. Even though it’s not winning all of the native benchmarks out there as like, frankly, we saw the day of launch on a non tech and serve the home. But I spent over 10 years competing with Intel, I spent 10 years at systems companies working with Intel. I think I know Intel pretty well. And one of the reasons that Intel, I think, is going to continue to do well, even though it’s not going to win on the non-native benchmarks is first off, they are bringing a lot of accelerators to the table. Inside of third Generation are crypto accelerators and machine learning accelerators. And for competitors, they essentially need to have an external accelerator to do that. But a very quick jump off of that you have to understand Intel. Let’s look at salespeople. Intel has hundreds if not 1000s of salespeople calling on end users in the data center, enterprise data center and CSPs COMs, SPS, etc. AMD doesn’t make this investment. Intel also pays, I would say for most of the design funding that’s out there and the OEM and a little bit of ODM. That’s a lot of money. So that reduces R&D costs for people.

Marketing – Intel spends over a billion dollars a year in marketing. AMD does not. And when you get into OEMs who aren’t picking sides here that means that Intel and AMD have to carry the water for things like promotion. And I just said Intel spends a billion dollars a year in marketing and AMD doesn’t. Who do you think wins this round? The other thing is enterprise conservatism. By the way, at this time, during Opteron, AMD at 26% market share, it has 10% right now there’s something going on here. And a lot of this, I think is enterprise conservatism, which is if it’s not broken, why fix it, AMD might win the native benchmarks, quite frankly, and nobody got shot in IT for being the hero but as I said in my article, they do get shot for being a zero for making life difficult maybe, or something more complex with live migrations. And I think that’s a real issue out there. Again, no disrespect to AMD. I mean, they went from 0% market share to 10%. There’s a lot of kudos out there. But at the same time, in a lot of benchmarks, they’re running up the score on Intel, and there are at 10%. So there’s other value that’s there that Intel brings to the table that I tried to uncover in my analysis, Daniel, and I think you hit on most of those issues as well.

Daniel Newman: Yeah, you did a really good job. And like I said, I recommend everyone that’s listening in pick, you know, just hit the article because like I said, it goes in depth at a level that you sort of had these it’s just the economy of people analyzing the day it was either kind of like yay woohoo Intel great job, or an in more cases, it was people who are kind of what I’d say your benchmark geeks kind of hammering Intel a little bit saying new stuff, but AMD’s faster and AMD’s faster. And all joking about that aside, the way I kind of see it is look, Intel gets ecosystem Intel gets marketing, Intel gets provenance in a way that hey, these companies I’ve worked with Intel forever, they’re going to stick with Intel, they got the wins they bought the same customers came back so you got your Oracle’s there and your Microsoft’s there and they’re all going to continue working with Intel. And so while Intel was at its very weakest over these past couple of years, AMD grabbed market share, but you could argue that the biggest opportunity that maybe would ever have existed for AMD to grab market share, probably passed at the point in which this Ice Lake launch took place. Because not only is Ice Lake now in market, but you do have Pat involved, you’ve got new FABS being built, you’ve got more scale, more manufacturing capacity being developed, you’ve got a company that’s seemingly finding its groove again. So there may not have been a better moment to grab market share. And you also have ARM entering the picture. And that’s going to change the landscape for sure as these Asecs are the data center continue to be built with special purpose. We’re seeing it from AWS and Alibaba, Microsoft is following track and you can be sure others will be following track as ARM continues to develop more and more capable IP.

Okay Pat great article, like I said, hit it, read it, go into the show notes. If you’re listening to this in the car, pull over, go into the show notes, click the link, bookmark it, go home read it because like I said, I don’t even think we could do it justice. Because like I said, he did a really good job of crossing. And by the way, very balanced. There was some very pro Intel in there. But there’s also some very not pro. And so that’s kind of what I love when I see analysis is it’s never one thing. And now the good analysis isn’t binary. It’s not all, you know, cheerleading. So

Patrick Moorhead: Listen, feel it. If it weren’t that we’d be influencers, you know, and not analysts to influence.