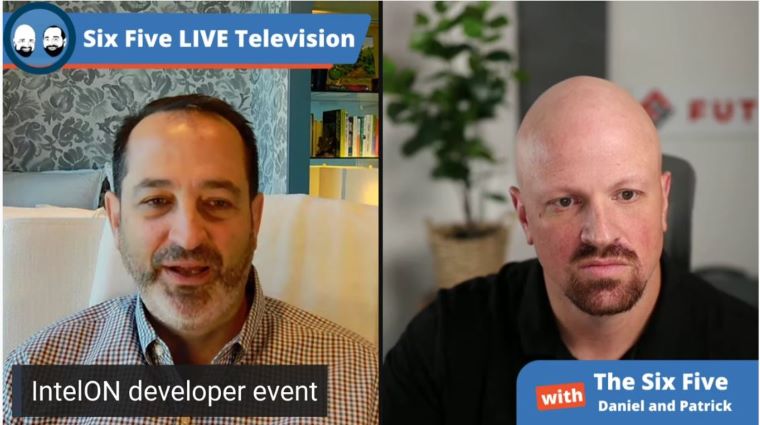 Daniel Newman: Let’s geek out for a minute, especially the geekiest event. Anything that Pat Gelsinger hosts is going to be super geeky and that’s his core, man. He loves talking about the tech and the vision and the roadmap. Intel, the Innovation Event or the ON Developer event did not disappoint… some serious announcements really widely across the portfolio, Pat. Hog this one, take it as far as you want to take it and I’ll try to find the scraps.

Patrick Moorhead: Well, listen, I’m actually not going to hit the announcements one by one, there were like 40 of them. I think what I want to do is just set the table on why something like this is even relevant. If you look back over the last five years, Intel has lost revenue and unit share to folks like AMD. Compute has broadened, and Invidia, from a training perspective has gobbled it up. PC gaming Intel has benefited from, but only from the CPU side and not the GPU side. Then, you have Apple who ejected full out stage left. You had AWS who didn’t eject, I would say maybe five, maybe 10% of their CPUs or their own CPUs. They’re leveraging at Intel big time, and not just for CPUs, but also for Havana training. That is what Intel goes into.

Bob replaced… terrible I can’t remember the CEO before Bob.

Patrick Moorhead: Yes. BK got pretty much walked to the door because of a prior relationship with an employee. Bob comes in, the CFO, likely taking the company down a path that was to get out of some of its fabs at least, that didn’t work. Street didn’t like that and they brought in Pat Gelsinger. The first thing Pat Gelsinger said to me when I talked to him when he became CEO… he didn’t understand why Intel’s developer forum, IDF, was no longer because… heck, this is going to just totally show that I’m a Midwesterner at heart. You couldn’t swing a cat in the last five years without hitting a developer event, whether it’s AWS, whether it’s Samsung, whether it’s Apple. Who doesn’t have a developer event? Intel, one of the largest platforms and ecosystems on the planet, so a little bizarre. The first thing Gelsinger says when he gets on stage is, “The geek is back”. It’s not the first time he said it. Some people said, “I don’t like… come on. That’s cheesy.” But it’s so funny, coming from him, to me, it makes a difference.

I think if you are a developer, if you are an engineer and you know Pat G, he didn’t just spend time at Intel before, he was CEO of VMware for I think eight years, correct me if I’m wrong. You have this combination of credibility, which is… I have a software guy who runs a chip company, he must know something for developers. I think this was a good step forward. I want to mention that they did this event live, not live taped and broadcasted, it was live. Gosh, kudos to all of them. Some people are saying, “You made a mistake here”, it’s like, this is live, folks. This is live right now, this is Six Five live television. We take it as it is, and quite frankly, that’s what people want. They’re sick of talk. I’ll end here. I left you a little bit.

Daniel Newman: Yes, you did.

Patrick Moorhead: What is the developer proposition? It’s absolute data center, it’s carrier, it’s edge, it’s PC. It’s an extended definition of compute, it’s GPU compute. It’s PC gaming, it’s workstation graphics, and then training… Habana with data center training, ZEON with data center inference. Their portfolio of offerings that they provide to developers, I would say, has tripled, quadrupled over the last three years. I’ll turn it back over to you, I left you a big one.

Daniel Newman: Well, I’m not sure which one you left me because I got a whole list, but the company had some really great partnership announcements. It had some forward looking, not guidance, but announcements on things that… where it’s taken delays and turned them into wins like it’s Aurora supercomputer that was actually, they were able to deliver… what was it? Twice the performance that they had expected while it was slightly delayed. I walked away, Pat, thinking if the market doesn’t get it by now, then I’m sorry. But Pat has done a tremendous job of explaining everything from the architecture, meaning changing this nanometer and transistor discussion that you and I have had several times on this show, to really just leaning into the fact that the company is not going to run away from its heritage. He started out doing the whole 50 years of, and he had a really interesting conversation about that.

The past is not always an indication of the future, but when you take your heritage and what made you successful and you build on that, it often can be a great indicator. I think that’s really what Pat is doing at his core. Just a couple things I want to touch on. Moore’s law is back, Pat, and he was very… you can hold your breath, but in the eyes of Pat Gelsinger, he said, “Moore’s law is not only back”, but he said, “They’re going to actually accelerate it”. Sorry, we have not realized this ambition yet, but what he’s actually saying is from two years to less than two years using the company’s new RibbonFET framework. That was a big point. Then, the other big side of it is they’re going right after Invidia with oneAPI. Look, and you did leave that there for me, you strung it out there for me.

This is an area where if you talk to the folks at almost anywhere that’s not Invidia, they’ll tell you there is a clamoring out there because Invidia’s been so successful. It’s grown so quickly and has had so much, basically, control of this developer ecosystem that people are interested in knowing what alternatives exist. OneAPI is really being built in such a way where people that are looking for choice, they’re looking to develop for the future, heterogeneous compute, they can build it on oneAPI. This has been the promise. We’ve said, Pat, and you and I have been pretty critical of its AI strategy, but you’re starting to see the pieces come together, whether it’s been discreet GPUs, whether now it’s oneAPI, whether… it’s having a vast developer ecosystem that people can build on, Pat. I think they’re prioritizing data science, meaning they’re not just looking at it from an AI standpoint, but they’re looking at that developer community and what that developer community can do.

The other thing too, Pat, is things that caught my attention… sorry, it’s almost hard to stay on topic because there were so many different announcements. But the partnerships with Microsoft and then the partnerships with Google. You’ve got an IPU, you’ve got Mount Evans and you’ve got partnering with Google, clearly trying to compete with everything from Nitro to Marvell and Invidia’s DPU strategy. That’s a big one. That’s obviously taking compute and taking resources and making sure that they’re applied to network security, storage, and general purpose computing correctly… big move, big partnership with Google. That’s going to be important for Google Cloud, by the way, which we circle back to be able to compete with AWS is doing with Nitro. Then, Pat, you and I had the chance to talk with Panos Panay and Gregory Brian, GB as he affectionately is called too. By the way, they’re really building a partnership around oneAPI to compete with the M-One developer ecosystem.

They want to be able to bring products together running on Windows, running on Intel that are going to excite the market and compete with the Arm based architecture of M-One. I’m looking at my 1600 word breakdown and I’m thinking through this, there is so much here, Pat. This could have almost been an episode in itself if we really wanted to get into the techno specs.

Patrick Moorhead: But, it’s not.

Daniel Newman: Thank you for reminding me of that.