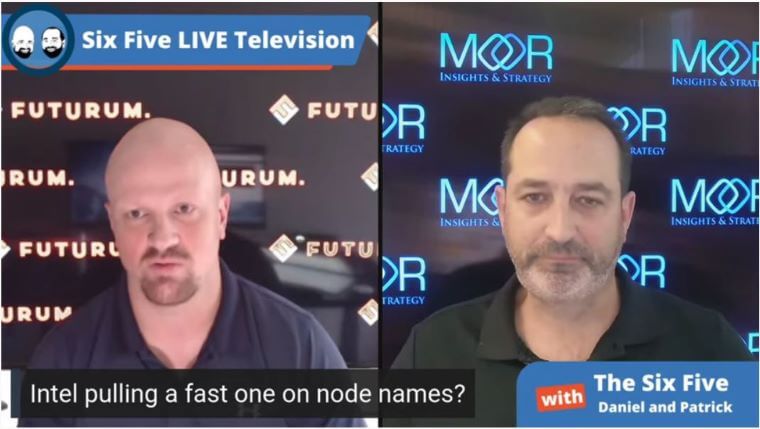 The Six Five team dives into the multi-year roadmap that Intel put out.

Daniel Newman: But let’s go back in time a little bit, just over a week ago. About a week and a half ago, Pat Gelsinger came out with a really big set of announcements. Unfortunately it fell right in the middle of this massive wave of earnings, but it was what we call an IDM 2.0 Plus. It was where Pat basically came back. Pat, this has really been sort of a calling of Pat Gelsinger. Since he’s joined as CEO, he’s been very active. The past few CEOs haven’t been talking about the future, and so this talk about the future of process technology by him really went beyond what any company has done in terms of talking about what we are going to be seeing over the next few years.

Patrick Moorhead: Yeah. So there were two main things that were announced here. First of all, new and then some transistor and packaging technology updates. So this is a dirty little secret in the industry is basically that this whole notion of talking about nanometers is a bunch of BS. And listen, I’m guilty. Okay? I’m one of them who was lazy. When TSMC said they were doing five nanometer, I said, “Okay, we’re going to call it five nanometer,” even though there was the actual double click and you’ve got N5 as the TSMC naming, but then you had Samsung who had a six nanometer process that once they realized what the characteristics were and they saw what TSMC was calling theirs, they called it five nanometers. So pretty much everybody in the know knows that transistor gate length as a nanometer likely died seven to eight years ago. The ability to look under a microscope and actually measure… And by the way, if you’re talking about multiple billions of transistors, what percentage of those transistors were actually in nanometers? So NET, Intel, and I wish they had done this years ago and I may have had some executive conversations years ago with Intel trying to get them to do that. But what they essentially did is they realigned all of their nodes with what I consider more of an industry normal.

So if you’ve got an N7 or an N3, you have Intel seven and Intel three. So it makes sense to me. And if I look at the performance, the density of those, they pass my smell test and then like others, when I first saw that the Intel 20A, A is for Angstrom, I was like, “Oh my gosh, we’re going back to nanometer.” Then I thought, “Well, what would be better, like Intel 1.8?” And that didn’t make any sense. So I understand why Intel got here. I’m glad where they arrived, and now I don’t have to explain to anybody anymore that, “Hey, Intel 10 nanometer is kind of like TSMC seven nanometers, which they call N7. I am for this day forward, or I guess two weeks forward, I will no longer refer to TSMC or Samsung as nanometers.

And if I do it’ll have air quotes around them because it just isn’t reality. And then again, I was part of the problem. Okay. I was lazy, even though I had to explain it differently. So the second part of this, or I think some pretty big breakthroughs in regards to process technology and transistor innovation. So RibbonFET… The rest of the industry refers to Gate-All-Around. IBM refers to it as ribbon something. My apologies. Then you’ve got PowerVia which essentially… By the way, what it allows you to do is jam more power down the pipe and have better connectivity, PowerVia puts power on both sides of the gate to, again, to be able to have better power management, higher drive current at all voltages and hence a higher performance of pulse power from the backside, as opposed to all coming from the top side. And then Foveros.

So Foveros is 3D packaging, it’s logic and logic. And essentially what that means is its memory on top of CPU. It is CPU’s on top of GPU’s. GPU’s sleeping with CPU’s and not being in a monolithic dye. And what Intel did is they brought a higher performance and a lower cost version out, which I was completely expecting was a response to what AMD showed, maybe, but I knew this was coming, wasn’t expected. They’re definitely not following AMD in regards to 3D packaging. I believe Intel was actually leading the industry in this space, TSMC and AMD, if you want to educate me on this and tell me why that’s not the case, you know where to find me out there. So big picture, I felt more confidence in what Intel was doing not only for their own products, but also for IFS and the Foundry, because if you have customers like Qualcomm and like AWS who are both announced on here with very little details, you don’t as a customer want to be explaining to your end users that, “Okay, I’m using Intel 10 nanometer, which is actually like TSMC seven nanometer.

Daniel Newman: And that’s a wrap. No, I’m just kidding. I’ll really quickly interject there Pat, because you really did give a lot of color. Did you admit to being part of the problem publicly?

Patrick Moorhead: Yes. Yes, I did.

Patrick Moorhead: I never called him on it, to be honest with you. I thought when I saw the quote from TSMC’s Godfrey Chang, from TSMC, who I’ve known for 20 years. TSMC would just stop calling it nanometer or they didn’t. They kept using nanometer.

Daniel Newman: So Intel enters, afraid, does it their way. And now you’ve got seven and four and three, and it’s Intel seven, Intel four, Intel three. And everybody’s going to skip off of the traditional nanometer approach and they’re going to now just focus on what kind of packaging, what kind of power consumption. I guess I look at it as a whole plan and I just think to myself, “Probably shouldn’t have done this a long time ago.” The market is better for it. The average person that’s still pining about it, doesn’t actually know what it means. The people that do know what it means, can’t actually communicate in a way that the market would understand anyway, because they’re talking at way too high of a level. This stuff is complex. The engineering that goes behind it is incredible.

Intel is doing things and Pat is showing their route to leadership. The fact of the matter is that when TSMC talks about five, everybody assumed nanometer, that’s already been accepted. There’s no going back from that at this point.

Daniel Newman: Hold on. You got yours done. Give me a second here. But no, I’m being sincere though. Pat, I think you could be an influencer as could I, but I’m just saying that sometimes when the ship is adrift, because I can’t tell you how many times I’ve gone on TV, whether it’s been on CNBC, whether it’s been on Bloomberg, whether it’s been articles you and I write on our different plastforms. And I have made the very comment that, “Hey, Intel’s 10 nanometer plus and TSMC seven are similar.” But the fact of the matter is that the people that are buying it are thinking the lower, the better. It’s ahead of Intel.

And that just really wasn’t the case. Now, was it, they were some months apart. Yeah, but they made it seem like years. They made months seem like years through the nomenclature, through that numbering scheme. And I just don’t know if we can reverse course there, but I do like the fact that Intel is going to play the game, they’ve got a long-term roadmap. Pat’s very positive. And by the way, if they don’t win the leading edge, they’re going to be manufacturing the chips for everybody because there definitely are figuring out how to play that game with the Foundry Services.

Patrick Moorhead: Yeah. And sorry to jump on it there.

Patrick Moorhead: But I’ve actually reached out to some of the leading tech editors in Americas, in Western Europe and kind of having this discussion, “Hey, are you going to keep using this?” And I’m going to put some scrutiny out there. I think we need to change this. It’s the truth, and I do think it’ll stick in Asia for various reasons. But TSM has a thing called N5, right? But the problem is on their website, it says it’s five nanometer, which is not. TSMC, if you want to prove me wrong, you can. But it’s just not. So I’m going to shake the tree for a while on this. Daniel, why? I don’t actually know why, because I just feel like it. And it’s the truth.