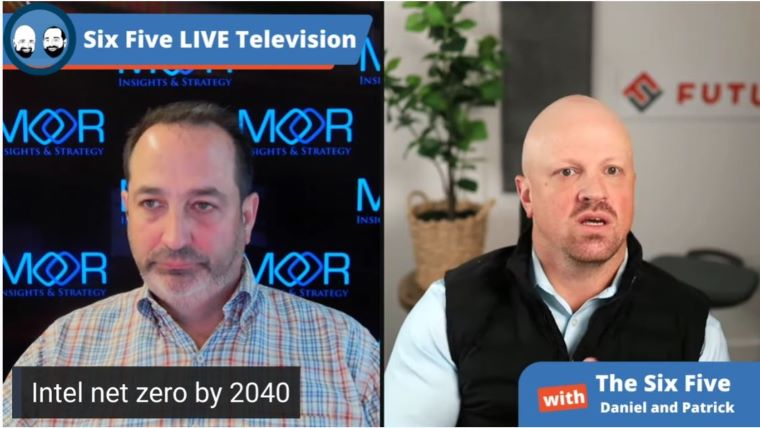 Daniel Newman: Let’s talk about Intel next. We have Intel, basically I just picked one, because there was about… over the last three weeks, Pat, there’s been like 7,000 announcements from tech companies about various greenhouse gas emissions, sustainability efforts, ESG sustainability reports. Just now this morning, ServiceNow put one out. I think a week or two ago we saw one from IBM. We’ve seen them from Amazon, AWS. This one happened to come out this week, so I picked it. At scale, what essentially we’re seeing here, Pat, and I think this will really flow nicely into our next topic, is that we are coming to ahead into terms of this conversation about companies coming out making material disclosures about their plans to be doing things for the climate, for the world.

That’s whether it’s materials, whether that’s manufacturing, programmatic changes, whether that’s data and accountability, whether that’s purchasing carbon offsets. By the way, Pat, the first time ever I was booking travel for an event through a booking and I was asked if I wanted to participate in carbon offset credits for my travel. Starting to see companies doing more of this. Intel basically came out, said that they’re going to reduce direct/indirect greenhouse gas emissions to net zero by 2040. Again, this aligns with what a lot of companies are doing. Some have gone as aggressively as 2030. I think the Paris Accord is looking out to, is it 2050? It’s a longer horizon, but there’s this horizon and companies are trying to challenge it and beat it.

One of the things I did like about what Intel did here was, 2040 is a long time from now, Pat. I’m not sure what I’m going to eat for dinner tomorrow. Actually, I’m not even sure what I’m going to have for dinner today. When you think about a company making a disclosure of a roadmap, for instance, we usually look at roadmaps like we want the chip roadmap for three or five years max. Coming out with ESG initiatives that are going to go out over two decades is one of those things that I think it gets kind of a wink and an nod and everybody says, great. And then everybody goes, I’m going to be like a hundred by the time this is done.

It’s kind of trying to reconcile that in people’s mind. I like the fact that Intel did come out with some milestones. They did say by 2030, they plan to for instance, achieve 100% renewable electricity used across global operations. They’re going to invest about $300 million in energy conservation at their facilities to achieve what they call $4 billion in cumulative kilowatt hours of energy savings. Then they’re going to build all of their new buildings, and of course, you know, they’re building all these new fabs to meet US lead program energy saving standards.

One other thing that they mentioned in this report, is that there’s going to be an ongoing increase in effort with its supply chain, its partners up and down, to expect and demand more from everybody in their supply chain to participate, because as we know, none of this happens alone. A semiconductor, what is it? 50, 70, sometimes 100 different sources of materials and assembly and manufacturing. That’s why our supply chain is so problematic right now. These are all partners of Intel, and then they got all their resellers and all the impacts that they have to manufacture the goods, a PC or a server. All that comes together.

I like the fact, Pat, that companies are coming out and saying it. I continue to be a little bit flexible about accountability of how do we really track this to make sure that what companies are saying they’re doing. Pat Gelsinger is the say, do guy. So I’d like to know how they’re going to say do, but I did like that there was a bit of an interim 20, 30 goal that’s going to be set. But overall, still wondering quite a bit personally, if all the efforts around climate and ESG are going to be matched with actual outcomes, and at what point are we really going to audit it and hold all of these companies feet to the fire?

Patrick Moorhead: Good stuff. So I’ll first say that I see a difference between companies trying to be woke and say they’re doing something, but they don’t actually have anything to do with the chemicals, the manufacturing plants. Then there’s the people who are using, actually doing the manufacturing. Intel, I mean, listen, all semiconductor manufacturers use some very toxic chemicals to do etching, to do cleaning. A lot of solvents and acids are used here. Chemicals like trichlorethylene, acetone, ISO propal, ISO propanol, and other alcohols like denatured alcohol. You can’t just throw those in a river. There’s a lot of stuff that’s done.

I think Intel making a proclamation on this to me means more than some of the other companies who, they don’t actually manufacture. They’re distributors. They put stuff together. This is a big deal to me, and this is why a company like Intel who actually has to make big decisions and big investments about this, I’m really appreciative that they would do something like this. I’ll wait for the next topic to dive into kind of some of the hypocrisy that I’m seeing on the device side. Not necessarily, maybe we’ll hit the data center side another time.