Intel is Exploring a Potential Purchase of GlobalFoundries 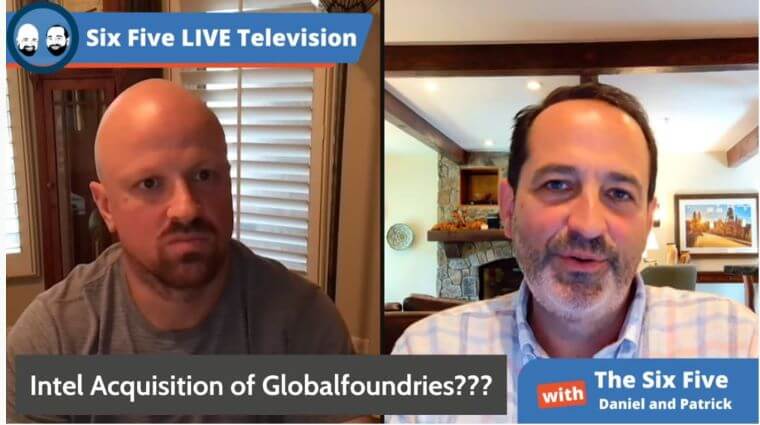 Patrick Moorhead: So hey, let’s get to our next topic here, and that is wow, the rumor. I’m sitting at dinner here in Colorado, and Intel possibly acquiring GlobalFoundries? What in the world is going on here? No, it was super interesting. In fact, I got called out on Twitter for not being out on Twitter quickly enough, which I found fascinating. It was by a journalist who I respect a lot, and that was pretty fun. But there is a rumor that came out in the Wall Street Journal that Intel would be acquiring GlobalFoundries for $30 billion, which I find fascinating. And let’s split this topic up.

One thing I’m going to explain is that Intel does things differently than GlobalFoundries. And also, if you look at the global semiconductor market, even the leading edge, like five nanometer, seven nanometer, three nanometer get all the pages because of the big investment, that is not where most of silicon is produced. In fact, most silicon produced is 28 nanometer and below.

And the reason we can’t ship cars and Chromebooks and PCs is less about leading edge and more about I can’t ship PC because my USB controller chip is 28 nanometer. I couldn’t ship. Or that one PMIC, that power management integrated circuit, which is done on 32 nanometer, couldn’t ship. So we’ve got to clear this up.

And what GlobalFoundries does is they focus on those low-power areas, like 5G RF that needs specialty technologies to be able to operate. Needs a material called FDSOI, silicon on insulator, to get that increased low power for IOT. They do silicon photonics. And yeah, I get Intel does it, but I guess my main point here is that GlobalFoundries does what Intel does not do and does it, quite frankly, in a better way. This has never been Intel’s target market to do these types of technologies. TSMC is in here, and ON Semiconductor is with their own fabs, for sure, but not Intel. So it’s definitely additive if this is true.

Daniel Newman: That’s great analysis, Pat, and I always love when you dig into the geeky, nerdy stuff. Let’s dive into photonics a little further. No, I’m kidding. Here’s the thing. Let’s talk about this from a market and a perception standpoint since you talked about the technology. Immediately, the number came out about 30 billion as a possible price. Now, if you’re not familiar with GlobalFoundries, they are a privately-held company, but they’re part of, I believe it’s pronounced Mubadala Investment Co, Mubadala, Mubadala Investment Co, based in Abu Dhabi. They do disclose some of their financials, so it’s not completely private and withheld. But it’s not the same transparency of financial data that you might get if they were acquiring another US corp. Kind of similar to the ARM and Nvidia deal, where you’re part of SoftBank’s fund. So you’re getting some of the data, but it’s a little bit different.

The $30 billion is being looked at. I believe 5.7 billion was the 2020 revenue number for GlobalFoundries, actually down a little bit over the last few years. But as we know, there’s a lot of things impacting the supply in the chip space. So is it all down because of demand, or is it down because of everything in the substrates and supplies and availability? Question marks all the way around. But I don’t think the deal is being looked at through the lens of traditional multiple-on-earnings or a traditional multiple-on-revenue. I think the deal here is being looked at through a synergy.

So you hit this on the head, Pat. What does this enable Intel to do that Intel couldn’t do before a deal like this would be completed? We heard Pat Gelsinger come out during IBM 2.0. One of his big four announcements was IFS was the foundry service and the expansion. You’ve heard about multiple paths being built across the US, Europe. We’re dealing with not just a need for more chips. We’re dealing with a need for more chips to be manufactured not in Asia.

You mentioned cars, Pat. It’s not just about not getting cars. It’s about not being able to afford cars. We saw, I think, automotive jump by a double-digit percentage multiple months back-to-back with no end in sight to this. Does this deal fix that? Not entirely. Not like this’ll get done quickly. You and I both called out regulatory scrutiny.

I think there’s a really interesting parallel here while the ARM Nvidia deal and the Intel GlobalFoundries deals have nothing to do with each other specifically, they have everything to do with each other. I really wonder if one could pass and not the other if both deals that are formed and if one deal was given the go-ahead and one wasn’t, what kind of turmoil that would cause within the antitrust and regulatory environment.

And the last thing, Pat, I just want to point as a fascinating factoid is GlobalFoundries was AMD’s fab foundry business that was spun off, what was that, around 2008? Was that before or after you left, by the way?

Patrick Moorhead: No. It was when I was there. I was running corporate marketing when we did that.

Daniel Newman: So that was spun off, but AMD is still a really big customer of GlobalFoundries. I believe they just signed a $1.6 billion multi-year deal, and so I just have to wonder how AMD would feel about sourcing from Intel in the event that this deal was to be completed. Lots of question marks. But for Intel, I’ll leave it on this, Pat. For Intel, this would be a really good deal. Now with all of the other flags that go up and have to be looked at, that’s going to be the question mark. But if Intel can get this deal done in that price range, it seems like it would be a winner for its long-term prospect in competing in that whole stack in which it’s been called out for not playing in in recent times.

Patrick Moorhead: Yeah. The AMD is a good question, but every month the percentage of AMD out of GlobalFoundries goes down. They do some interconnects, and they do legacy APUs for them, but all the future-forward stuff in the last two generations of product has been primarily TSMC, with the exception of that bridge chip that they use to connect their chiplets together. Some of that’s from GlobalFoundries, and some of that’s from TSMC.