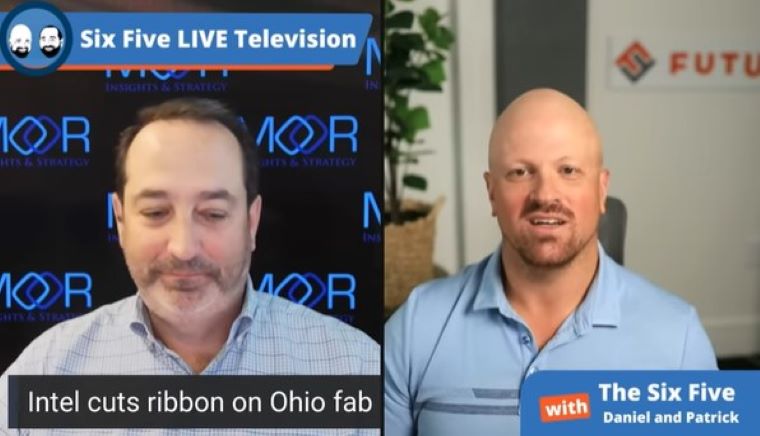 Daniel Newman: President Joseph Biden has attended the ribbon cutting ceremony in Ohio just outside Columbus where Intel is going to start. It’s breaking ground on its mega fab. And that’s today. And so while we’ve had a…

Patrick Moorhead: People are lining up right now as we speak.

Daniel Newman: Yeah, speaking of speak, I’m a little sad, I wasn’t invited. I feel like you and I were quite active in communicating the critical nature of this moment for our country. I think I did 100 TV appearances on chips, semis, supply chains. You probably did billion articles, quotes and your own TV appearances. And we were out there kind of trying to tell the world like, hey, this is kind of important. Not saying that I entirely agree with the final legislation. I’m not sure I’m entirely happy with all of what passed. But what I do agree with 100% is 100% of our leading edge chips should not be manufactured in an area that’s sitting on the brink of war at any given time. We all agree on this. There’s semantics where the money goes, how it gets distributed, which companies should be. I think Intel stepped up though. And I think I’ve been pretty vocal about that.

Look, I understand some people think maybe it’s corporate welfare, but the bottom line is we need to build these fabs. And there is a private public partnership. This is not a new thing. It has always existed. And if you don’t understand the critical nature that semiconductors play in our life by this point, go climb back under the rock that you came from. And don’t ever come back to my show again.

Daniel Newman: Am I serving it up? I thought I was all out of hater-ade. That’s my last little bit. But the point is, this is important stuff. Again, there’s always going to be debate on how it gets deployed, whether we execute it well enough. And of course, Intel needs to be executing on its boundary, on its process. It needs to return to leadership. I read an article on MarketWatch the other day that said, if there’s one company in the world you should be rooting for in the US, it should probably be Intel. And the point is that we’ve got a lot of fabulous innovators. We’ve got a lot of innovation in chips. Everything we’re doing, including this podcast, is hyper dependent on semiconductors because semiconductors, software does not run on air. So I’m happy for Intel. This is a good moment for the US. I guess with the Queen and everything, it’s kind of a solemn day for some. But for the US in a multi-year fight to try to get some progress on our own technology leadership is a good day.

Patrick Moorhead: I’ve had my criticisms of the Biden administration, but I am a reasonable person, and I have to give them credit. The Trump administration could not punch this through. And it was decoupled from the ridiculous $3 trillion spending act. And kudos to Biden and the administration for making this happen. But I got to tell you, kudos to Intel and Pat Gelsinger. He spent probably more time in DC than he did on the West Coast at Intel, essentially, trying to secure Intel’s future for the next decade. And also consequentially will help with our national security. It’s appalling the amount of leading and bleeding edge that we do in South Korea and Taiwan. You’ve got Chinese warships circling Taiwan. You have missiles that are being shot over South Korea into the sea. I mean it’s nuts. Forget about how we got in here. This ribbon cutting is a great example of the future of semiconductors. Congratulations, Ohio. I am in Ohioan, and I admit it.

Daniel Newman: Did you spend any time in Cleveland?

Patrick Moorhead: I grew up in Cleveland, and I admit it.

Daniel Newman: All I can think about is that Daniel Tosh bit where he says, if you’ve never been to Cleveland, congratulations.

Patrick Moorhead: No, listen. In 1968, the Cuyahoga River caught on fire because a big gasoline tanker ruptured. And literally, the lake was on fire. And that’s where the Cleveland as a mistake on the lake moniker occurred.