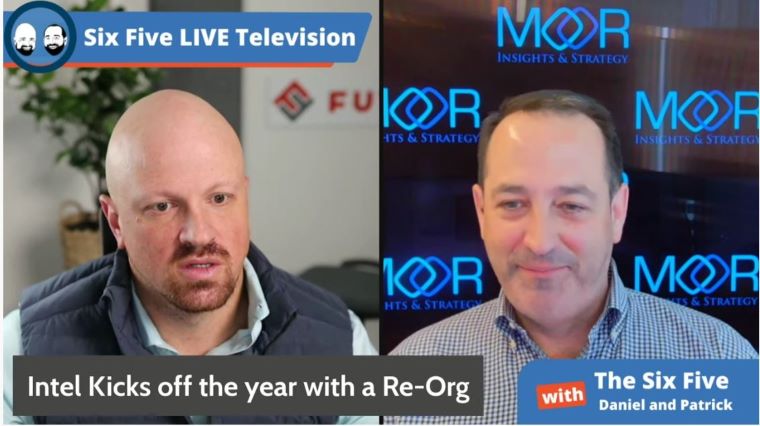 The Six Five team dives into the Intel announcements about their new executives and what that will bring to the company.

Patrick Moorhead: Let’s move into the next topic here and we have a beginning of the year shuffle at Intel. Dan, you want to go through that?

Daniel Newman: I’ll start us off and I think we can talk about it. You sort of alluded to it. I think we were all pretty surprised. The chief on the client business, GB as he’s best known, but Gregory Bryant, they announced somewhat unexpectedly. We saw him at CES. We’d spoken to him just at length on a call not too long before that. And we heard, “Well, here’s a shuffle.” Here it comes. Some changes. We don’t know if we call it a reorg or a shuffle exactly. There’s some exciting news. There’s some news that I think everybody’s got a couple question marks around. But I think there’s some great leadership. We now have two female leaders leading the two biggest business units of Intel, the client business, Michelle Holthaus, who had long been a sales chief for the organization, is now going to be stepping into GB’s role, and that’s to go side by side with Sandra Rivera, who handles on the data center side and the server side.

And so, that was big. We don’t know yet or at least publicly yet where GB is going to land, but the rumor is it’s going to be a big role somewhere, and so we’re all rooting for you, GB. Just so you know. You’ve done a great job there and it’s been a very challenging number of years, and you’ve done a good job of leading that organization.

In positive news, or positive opportunity for some change that could be very good, CFO George Davis, great guy in my experience, my handful of interactions with him, but Micron Tech’s Dave Zinsner is coming over to take the CFO role, so that’s another big move, Pat. He comes in as the EVP and the chief financial officer. This one, Pat, I guess I would say anytime you get shakeups in leadership like this, there’s always PR, and there’s always publicity, and what I say when I say PR and publicity is there’s always going to be a little bit of there’s going to be people who spin it as good and there’s going to be people who spin it as bad. And actually, my take on this is there’s a great leader exiting in GB, don’t know George Davis as well, but what I will say is that the work that Michelle has done and what I’ve seen so far has been good, so I want to give her a chance and say she has the opportunity to be very successful in this role.

And of course it’s going to be challenging, but under Pat Gelsinger, he seems to be providing continuity. He’s got a consistent vision. It seems to be his story and his narrative to market has been very consistent. And now I think we need to give a couple of quarters if I’m being frank to kind of see how this shakeup changes, if it has any impact on progress, timelines, as we just talked about pushed timelines, things disappearing off of proposed launch dates. Because I’ve been saying for many quarters now that Intel’s biggest thorn in its side is going to be being able to meet its commitments to the market, and Pat’s been very… His whole say do story has been very consistent, and so under these new leaders, whatever they’re saying, and under GB I think they were pretty good about this, but that’s going to be the next thing going forward, is what they’re telling us has been convincing, but it hasn’t been convincing enough to the market yet because everybody wants to see execution.

Patrick Moorhead: You typically don’t put on stage of one of your biggest events a year a week before an executive leaves. While I believe that this was in planning for a long time, I doubt they would have put GB up on that big stage if everybody had known. That’s just the way big companies operate. And you know, I think GB is an absolute rockstar. I believe that he’s leaving for a president or CEO role at a public company, which is why he can’t say where he’s going. I’m sure he had to tell Intel whether it was a direct competitor. If it was direct competitor, they would have walked him, so I don’t believe it’s a direct competitor, and I don’t think it’s in the supply chain, either. So, we’re going to have to see here.

I’ve talked to Michelle a couple times. I’ve talked to some people off the record that have worked for her or currently work for her. They have some really good things to say about her. Before I knew Michelle was coming in, I had thought Pat was maybe wanting to put a more technical crew in there, but appointing Michelle to that role, that doesn’t say that. Her background is not necessarily high technology and engineering. So, I’m still optimistic about how the company’s doing. GB is leaving on a high point. His unit’s share is going up. His revenue share is going down. Every wafer that AMD is putting in the oven, and they can’t get enough, is going to higher priced silicon. One of the benefits that Intel does have as being an IDM is being that they have essentially lower costs if you can actually make the chips, so I think that the PC market will gain unit share.

So, anyways, I think we’ve probably chatted about this one about as… Gotten all the-

Daniel Newman: It could almost be you and me in that picture with the masks and you can’t quite see the features.

Daniel Newman: GB is a little bit more handsome and thinner, but overall that kind of… That image, we could actually just blur it a little bit and just say that was us.

Patrick Moorhead: Yeah, so man, it’s a bunch of chips. Let’s move to our last… Oh, gosh. It’s not even the last topic.

Daniel Newman: Yeah. We got two more, but the last one should be somewhat quick.