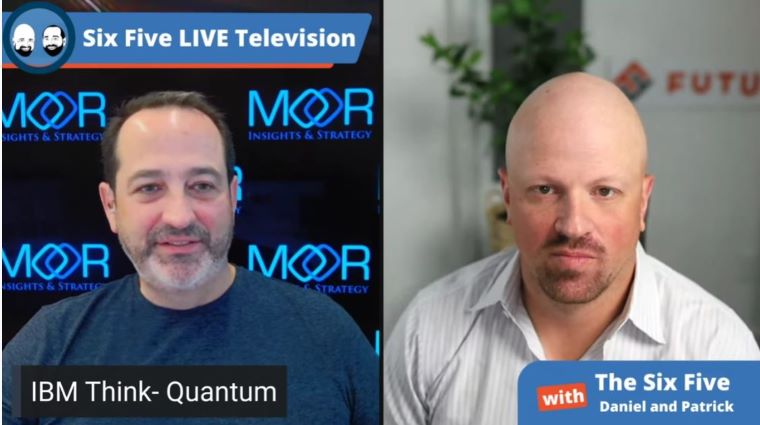 Patrick Moorhead: The next big announcement that we had from IBM Think was quantum. If you followed IBM quantum for the last five years, you will know that IBM’s ability to hit its quantum roadmap, even though it’s research, they’re hitting at least 90% of their promises that they made back in 2019, and I can’t say that for all the quantum players out there. So what they did here is they rolled out a roadmap that goes beyond 2026, but I think it’s important to focus on this 2023 to 2025. So essentially what they’re doing is they’re adding what I consider semiconductor capabilities, which is first of all, you’ve got dye stacking with TSVs coming through to be able to stack quantum compute units on top of each other.

And then, it’s all about the connectivity, fusing together chips, and Daniel, where have we seen this? And if you can see my mouse here, here’s three of these quantum compute units fused together, and then a high speed backbone to make that happen. And in 2024, these connections are more classical, but in 2025, they are more quantum-like and entangled. And that’s a big deal because essentially you have raw quantum communications between these different modules.

And if it weren’t enough of a flex, Daniel, you can connect multiple of these Kookaburra systems together to get up to, and it’s funny, this was not necessarily in the pre-brief, I think they left this for the event, which was pretty cool, 20, almost 21,000 qubits. Now, to be fair, not all qubits are the same, and I think what IBM will be challenged on is the fidelity of their qubits, or the usable qubits. Some other companies call them algorithmic qubits, and I think IBM is getting ahead of this by them showing this Falcon R10 test device with a radically improved fidelity rate. Because there’s no question on the technique that IBM uses around speed, right? Superconductors are fast, but the big thing that their technique gets hit on is the quality of those qubits.

And if IBM can hit that fidelity, and hit Kookaburra at around 21,000 qubits, it could be the size of a data center floor, but I think there’s could be different instantiations of this, Daniel, if they can hit this, I think they have the potential to really hold on a leadership position on this, which, my gosh, kind of blows me away that we’ve come so far. And we’re going to see some announcements over the next 12 weeks, from other companies out there with different software that can actually utilize the IBM system. So, super exciting stuff, a big leadership opportunity for IBM.

Daniel Newman: Yeah, Pat, you covered a lot of it, and at a technical level, this stuff is extraordinarily complex, and it takes, I don’t know, we need that island that Arvind talked about with a billion physicists, chemical engineers, quantum physicists, scientists. But in all seriousness, one of the things I really appreciated from both Dario and from Arvind is the sort of really honest approach that they’re taking that they’re research heavy, they’re building a very significant ecosystem with partners in government, in higher education, in large enterprise. They’re testing to try to create this high fidelity qubit that can add value, they understand the interdependence that’s going to exist between classical computing and quantum computing to really bring benefit in a commercial space, and they’re also saying, at this time, it is primarily theory. They’re saying that they’re building these things, but it is not, let me be more clear, it is primarily not commercialized at this point.

And Arvind said that very specifically when we talked to them, because there are a little bit of sort of a mix when you go across the spectrum of companies that, the promise of the commercialized quantum machine has kind of hit different phases, because there’s things like Azure quantum, and there’s Bracket, and you say, oh, they’re in the cloud now, quantum is just a widely available thing. But the truth is, is that getting these high fidelity qubits that are sustained with low error rates is going to be extraordinarily important to do the type of computing that’s going to solve everything from engineering, anti-money laundering, applications in drug discovery and compound detection, that’s going to work and coincide with the classical computing space. I like the ecosystem focus that IBM has, they’re building the right set of partners.

And like I said, I like the fact that they’re trying to build something to commercialize over the next few years that’s scalable. You showed the architecture, Pat. I kind of look at it and I’m thinking, with all of what we’re doing with 3D, with chiplet, with stacking, with CXL, which we’ll talk more about, they’re trying to build a way to create higher fidelity and more compute power on a foundation, Qiskit, and what they’re they’re doing across the board, there’s a lot to be impressed by.

But like I said, Pat, you still do need an extraordinary technical understanding to see where they’re at right now, to know that this is evolutionary, it’s going to take a few years. But I do believe, Pat, probably in the next one to two years, we’re going to start to see much more clarity in the commercialization from IBM quantum, and this whole space, which has been nascent, in a lot of ways, in terms of actual in-market technologies. We talked a little bit, like with Continuum, with some of the security applications on SaSS and stuff like that, but it’s still very early. But what I got from Dario is that the research, the R in IBM, that you like to talk about a lot, Pat, is in full effect. The investment is significant, the roadmap is becoming more clear, and that quantum should be realized, Pat, at least in my lifetime, maybe not in yours.