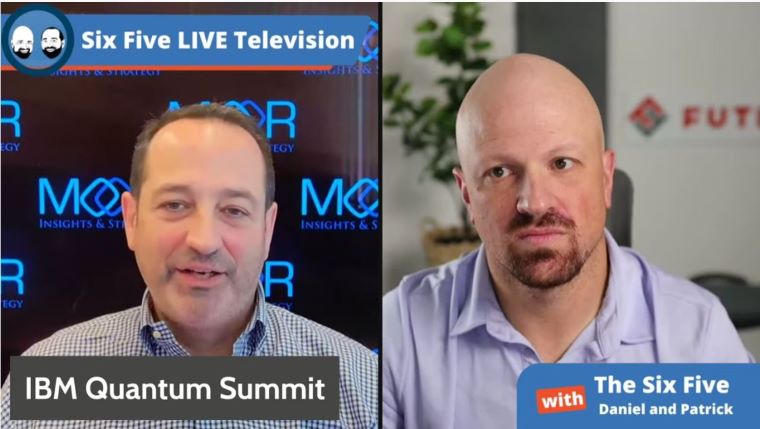 Patrick Moorhead: So let’s dive into topic number one.

As you know, there is a huge battle going on in quantum. It’s early. Some people say it’s going to hit impact in five years, some people say 10, some people say 20. All I know is there’s a ton of investment going into this and IBM is making some really big moves.

They had a huge announcement at their Quantum Summit, which was pretty exciting. So I would say the highlight here is IBM rolled out 127 cubit quantum computer. And it is the first quantum computer with more than a 100 high quality cubits. And as you know, it’s not just about the number of cubits, it’s about the quality of it. And by the way, we’re doing a lot of research on this. Paul, our principal analyst of quantum and space, we’re still getting underneath this. So I’m going to try not to make too many claims here, but 127 qubits does put it beyond reach of today’s classical computers’ ability to simulate that and we did see that. I believe they were doing a fusion ion or maybe it was a lithium ion simulation where running it on quantum took seven minutes and I think running it on conventional took about seven years, so that was pretty cool.

The other thing that IBM did is they rolled out a new measurement, which added this idea of speed, scale, quality, and speed, which by the way, at the outset looks very rational. I get that, particularly the new speed, but I really wish they hadn’t rolled this out within 18 months of rolling out quantum volume. Because if you remember, first it was all about qubits and then it was all about quantum volume and now at least according to IBM and it’s hard to disagree with them, is adding this idea of speed and that’s gate speed. So pretty good stuff. We’re doing a lot more research on this to see if we can take bigger shots at it. But I think the big picture is IBM is moving up and to the right increasing capabilities. IBM happens to have one of the bigger development communities out there and they have more logos associated with their quantum name than any other company right now.

Daniel Newman: It was an impressive announcement. The company is basically on a trajectory of announcing a new processor almost on an annual basis. They had the Falcon in 20, I believe it was 19. They had the Hummingbird in 2020 and now this is the Eagle processor. Of course, for those of you that follow the basics of quantum, IBM builds on a super conducting platform as opposed to a lot of what we talk about ion trapping. Often when we talk about, say Honeywell or say IonQ, we talk about ion trapping, which seem to be the two most popular methods right now for building out quantum.

This increased number really is all about being able to drive and accelerate applications that we are familiar with, but haven’t become overly familiar with in a quantum format, such as machine learning, modeling molecules for drug compounds, and creating drug compound creation. So we’re seeing that happen very quickly.

I thought overall, Pat, that this was an important announcement that because of the academic and importance of research and showing that the company is continuing to move forward, when you are hearing so many announcements from the entire field of quantum about advancements. I also do like hearing more about the practical relationship that’s going to take place between quantum and classical. While you did mention specifically that this is an example where quantum will outperform, we’ve all come to a relatively strong consensus that the optimized outputs will come when classical and quantum computing are working harmoniously so that quantum is working on solving the problems it’s most well designed to solve and concurrently, on the other side, the classical computing continues to do what it’s most well designed to do.

So this was a pretty strong announcement and, Pat, by the way, you and I will be doing a series of Six Five videos with the IBM team around the quantum summit to dive deeper into IBM’s advancements, customer examples and then a little bit further into recent search in the academic side, which I think are the three major components that are being worked on from IBM. An important set of announcements as we continue forward over the next decade of quantum advancement.

Patrick Moorhead: Yeah. I’m super looking forward to that and I believe that they’ll also have some customers on there, which I’m looking super forward to.