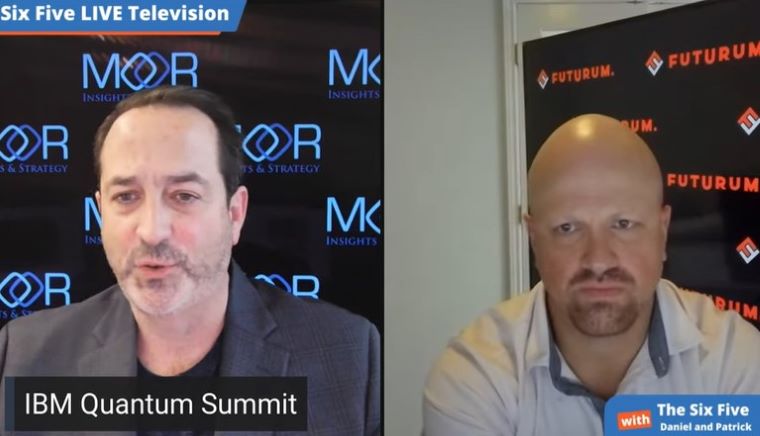 Daniel Newman: Let’s talk IBM Quantum Summit, Pat. Putting it in the show notes, great piece by Paul Smith-Goodson, contributor of Moor Insights and strategy contributor group at Forbes. He kind of went out and gave the quick and dirty, I was actually in New York City for the IBM Quantum Summit, SVP and head of IBM research, Dario Gil and VP Jay Gambetta kind of kicked it off and there was a lot of in depth. I mean look, if you get around Quantum, it is super technical, its super complex and it’s really, really nerdy.

But having said that, I think this event that got me excited was the company leaned into making Quantum real, making Quantum addressable. A lot of talk about kind of the Entanglement of Quantum and classical computing. Of course the big moment was the launch of the Osprey. That’s the company’s newest, I’m trying to think, is it 433 cubit? Now Pat, you and I have really been talking about this since, was it Falcon? I mean there’s been three, four iterations. It’s happened really quickly as they’ve moved through the paces to Eagle, they’re basically quadrupled from Eagle, which I remember you and I talking about just like a year ago. The company is focusing on the coherence and increasing that significantly. It’s focusing on ecosystem, getting the right partners around it, getting research around it, and then of course bringing real commercial opportunities because I don’t think IBM gets much credit in terms of the valuation of the company for how much they’re putting into this particular space and the opportunity that it’s creating.

I know we’re really short on time Pat, but I just wanted to kind of come away and use this platform to say, look, we’ve got to give credit where credits due. We’ve kind of had this big pivot on IBM over the last year. The company’s getting its core business right and I think it’s getting things right here with Quantum in terms of being able to explain the incredible technical complexities of doing Quantum, but also being able to start to show how Quantum is going to be able to meaningfully interact with classical computing to start to help real companies solve some of the most complex problems that classical computing tends to struggle with in isolation. So we’ll have more on that. Read the article on the show notes. Pat, I’ll leave you the last word ’cause I know we got to take this baby home.

Patrick Moorhead: Yeah, this show, this summit was two parts. It was affirmation and what the company is doing in Osprey. It was giving an update on error reduction, giving update on Qiskit Runtime Primitives, an update on dynamic circuits and which are an update on Quantum Safe but the new thing was this notion of Quantum-centric computing. I had the chance to talk to the head of Quantum at IBM, Jay Gambetta. You can see the video on my YouTube. I also put it in the show notes but essentially how Quantum computing and traditional computing can work together in the future and that’s really what it’s like. Just like a GPU, you have a Quantum accelerator that through APIs you can create applications and usable stuff. So they’re on track for what they committed at IBM think and I’ll leave it at that.