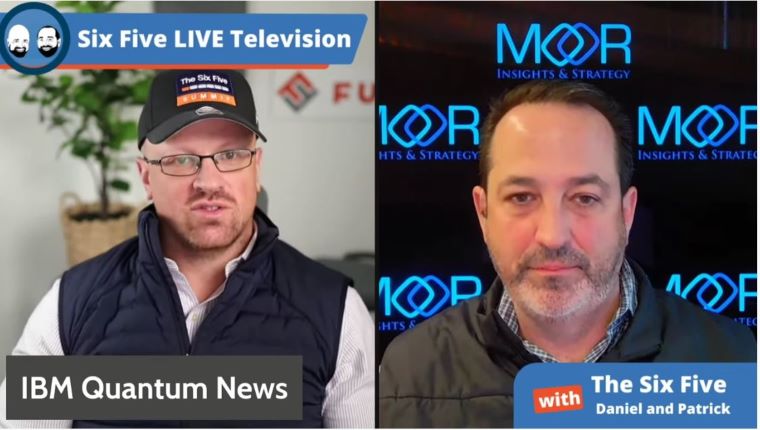 Patrick Moorhead: Let’s move to our final topic. IBM Quantum news with HSBC. Daniel, what is going on here?

Daniel Newman: Well, in this case, they want to accelerate quantum computing. So, it’s all about accelerating stuff. We are the Six Five accelerator, we’re accelerating a conversation. Yeah, we haven’t talked about, sorry IBM Quantum, in a while. We haven’t talked about Quantum that much in a while. It’s gotten a little quiet after a period of time where there was a lot of announcements. We saw companies like IonQ go public. We saw a Honeywell spin off with CQC to create Quantinuum but what’s happening with quantum? Well, it seems to me that what we’re doing now is we’ve entered an era of bringing quantum to life through real-world applications and partnerships.

So IBM, I think it was yesterday or two days, ago made an announcement alongside HSBC, one of the world’s largest financial institutions, that they’re going to do a multi-year collaboration to basically help HSBC bolster its quantum experience. Essentially what I think is going on Pat, is IBM is working closely, side-by-side with the company, to help them really understand what quantum is capable of and figure out how to implement it as part of their business. So, for a company like IBM, this is going to mean giving access to systems, including … we talked about the Eagle on this show, right? Its Eagle processor and also working closely with the company to do some validation of potential use cases.

Now, in this particular space, financial services, one of them is like anti-money laundering and fraud. This is a huge opportunity right now, when you have the volume of transactions that are going on, you will need additional technology. This is where AI and accelerated workloads are coming into places. This is also where Quantum is coming into place. Really important to note though, Quantum is not a replacement in any way of what they’re doing with IBM, it’s not serving in any way as a replacement to classical computing and what you do with accelerated computing to solve these problems. What’s really going on is, it’s transformative. It’s working in partnership with, or in concert with, to say, “Hey, let’s take the best of what classical of computing can do. And let’s take the best of what quantum computing can do to potentially increase accuracy and more quickly get the insights that are required.”

Pat, as I see it, I believe financial institutions are a massive opportunity for quantum computing. We’ve seen studies in the past from likes of JP Morgan. Now you’re seeing HSBC. We have a decade of fairly significant innovation that’s going to go on in quantum. It’s going to be done in partnership. We’re going to see more simulation, where you’re going to see quantum workloads being deployed in public clouds, or in cloud type of architectures, so that you can take advantage of them in concert like I said, with your classical computing applications. For IBM as a whole, I think the continuous drip of notifying the market, “Hey, we’re winning customers. We’re winning large academic institutions.

We’re winning think tanks, research labs around the world.” To be able to say, “Hey, this technology is valid.” Of course IBM, built on super conducting. You’ve got the likes of Quantinuum and IonQ that are built on ion trapping. There’s still architectural debates going on in the marketplace, but the opportunities in markets and finance and energy, basically everywhere you see AI, in predictions at scale, being done to try to help industries take masses of data, there are parallel applications that quantum can support and bring more value to market as well. This is one example that IBM has. So HSBC, this is cool, but I think overall what’s really cool is what this means in terms of building meaningful, understandable applications for the market.

Patrick Moorhead: Dan, good job here, buddy. I want to add a couple things. So, first of all, if quantum is one of the next big leaps in computing and we all have to ask ourselves, “Hey, what phase are we in now?” There were four phases of AI before it became real. Heck, it took us 25 years to popularize the touchscreen when it came out for a computer. But I can safely say, based on my research, that quantum will be real and quantum will add incremental value over traditional computing. The only question is when. I think over the next three years, we are going to see SaaS services and we are going to see solutions that are going to be better and demonstrate quantum supremacy for algorithms that people actually care about.

I say that is because Google already showed quantum supremacy, but it was on an algorithm that nobody’s really doing anything with. So, we have to look at it like that.

I also want to talk about IBM strategy, which is to be essentially a full stack provider. They have the hardware, they have the developer tools, they have the ecosystem. They have pretty much have everything in place. I mean, they have multiple ways to consume as well. I think the only thing that IBM needs to always be looking at is, are superconductors going to be the technology that are going to take us into the next generation related to not only the number of qubits, the quality of qubits, but also the size of the installations that are required to do this. But right now, that’s the only thing that IBM has to be looking at.

One of the reasons that I think, in addition to some of the benefits of IBM strategy for quantum, that it brings to the table, is trust. If you look at IBM’s roadmap that it put out, I think like six years ago, and what they committed to, they’re actually delivering to promises that they made that long ago. If I do a sweep and I look at what I been told by some of the quantum computers’ makers, they’re slipping schedules all over the place. If they give a roadmap, it might be, I don’t know, two years long, or it’s 10 years long where, where nobody’s going to remember that. So, I think so far, IBM Quantum has engendered trust across its customers because it’s actually delivering what it says it’s going to deliver. So with that Daniel, that is the end of IBM Quantum and the end of this podcast.