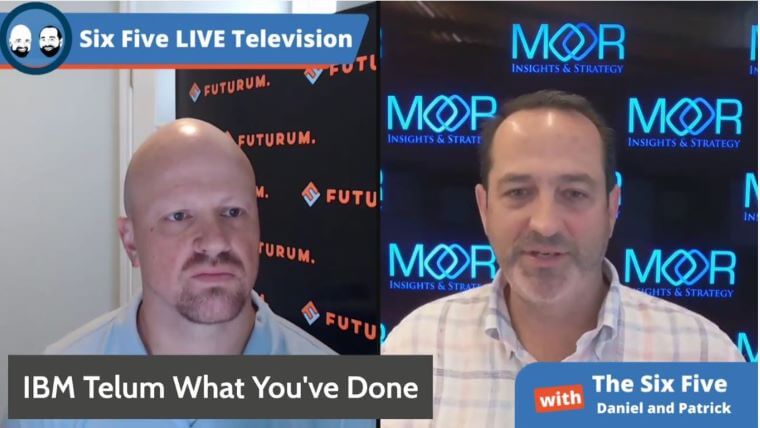 The Six Five team discusses the IBM launch of the new Telum Processor.

Patrick Moorhead: IBM released a brand spanking new processor. Before you say, “Oh my gosh, we really don’t care about this,” I want to talk about something. So, first off, I would say 30 years ago started the commoditization of the data center and consolidation. 30 years ago, you had primarily IBM, you had HP processors, you had deck faxes and believe it or not, Intel was just starting in the data center. Then pretty much the entire data center went x86, but where we are right now holistically with chips, is that you’re seeing more of them create fit for purpose solutions. You see Apple, who’s the full stack. You have chips, operating systems and applications out there.

You have AWS, that’s creating its full stack. Well, IBM’s mainframe unit, and for that matter POWER10, they create their own full stacks as well, except they were doing it 25 years before AWS and Apple and technically before POWER it was the RS/6000 and the AS/400. But anyways, I digress. IBM came out with a new processor for the IBM Z, the next generation, and really the key points here are its capabilities for integrated machine learning. And you might say, “We’ve seen that. We saw this with Intel for the last generation.” Keep in mind that most financial transactions, whether it’s a banking transaction or a retail transaction are done on an IBM Z. And the reason is because it is the most secure platform on the planet. And yes, I am saying that and I’ll stick to that, and you can challenge me on that if you’d like, but the other thing is, is optimized, it’s more of a throughput engine in the way that it’s architected. ASICs and offload engines have been cool for the last five years, but IBM Z processors already had compression and decompression cryptography, but what Telum offers, the biggest thing it offers is on-chip machine learning, which I think is pretty cool in the way they architected it.

So what it enables, let’s say a financial institution, to do is traditionally, if they wanted to do a fraud analysis, you had to do the transaction on the Z and then ETL that data out to, let’s say an x86 with an Nvidia A100 to do training and then maybe a T4 or something like that, a P4 to do the inference. Now you can actually do the inference on the chip without ETL-ing out outside. That saves time and I would say it even is … I can’t say it’s more secure, but it’s secure in the fact that you’re not moving data over. So, that is the big news.

The other thing I liked is it showed that the speed of this. So if you have 32 new Telums, which is in a four drawer configuration, 3.5 million inferences at 1.2 milliseconds, and that is nuts, that’s crazy, crazy fast.

The other thing I’ll add is that, listen, I know IBM has a reputation for being proprietary, but you know, the Zs run a full Linux stack all the way up to container management and even systems management, it is all based on open source. On this AI perspective, it’s fully Onyx compliant, which means if you want to run Keras, PyTorch, SaaS, MATLAB, Chainer, MXNet, TensorFlow, it can be accelerated by this new processor.

Usually I start with this, but I’m going to say last but not least, it’s an eight core, 16 threads per chip at a mind boggling five gigahertz. It’s a deeper pipeline configuration, maximum 32 core 64 threads. You might be saying, “Oh my gosh, that’s so small.” Listen, the Z is a transaction engine. You don’t need 128 cores. And also keep in mind that that a lot of the acceleration is either on cards or already on the chip itself when it comes crypto and compression and decompression.

So, I’ll leave it at that. Kind of geeky, but we love chips and listen, chips and SaaS is where it is all at. Theoretically, everything else can be disintermediated in the center.

Patrick Moorhead: We are done.

Daniel Newman: All right, we call it The Six Five, because we talk about six topics. Pat talks about them for five minutes and I get what’s left. Just kidding, look at you getting all sensitive. No, a really good analysis there. There’s a couple of things going on. I think first of all, the migration to public cloud has been greatly overstated. We’re still seeing a ton of workloads on prem. The other thing here that I think the market needs to really understand is that IBM has a very innovative part of its business that focuses on shift development, work side-by-side with companies like Intel. You might’ve heard that when Pat Gelsinger made some announcements earlier this year about what they’re doing and their long-term strategy. You might’ve heard about it with the two nanometer announcements that came from IBM, not so long ago.

By the way, this is just a show of understanding the market’s continued demand for custom silicone in mission-critical workloads for specialized needs, which by the way, is why Z has been so important for so long in this financial space and the transaction space. The need for this kind of processing continues. AI is only going to continue to grow, it’s exponential. These particular tasks to help improve transactions using inference is going to be meaningful. You also have to deal with cryptography, compression, sorting, and there’s a great opportunity to tie this all in with confidential computing and trusted execution environment and enclaves. I imagine IBM is going to continue to build this all in as part of the stack to show this connection between private, hybrid, public clouds is the route forward. IBM, thanks for telling us what you’ve done with Telum.

Patrick Moorhead: I see what you did there.

Patrick Moorhead: I’m a big proponent of it? No, no. I appreciate you doing the bigger picture as I nerded out in the deets.