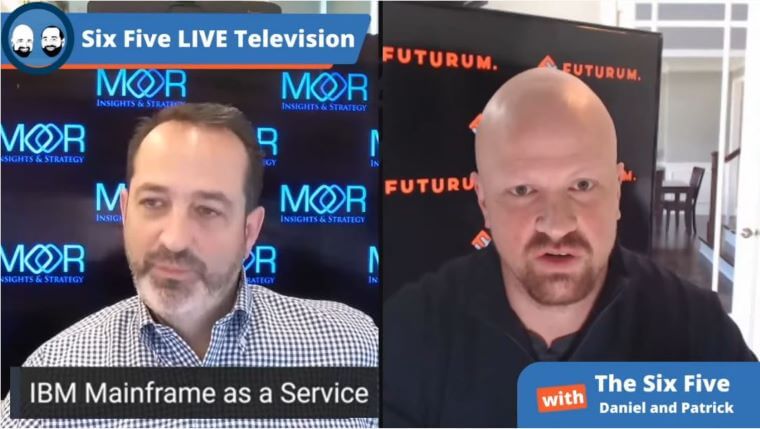 Patrick Moorhead: You got it.

Daniel Newman: They came out with a new Linux box, the LinuxONE III Express Model. I never know how that’s supposed to be said out loud. Then they came out with some new mainframe. Basically on the LinuxONE, it came down to IBM identifying a really interesting opportunity to play a little bit downmarket using its capacity, using it’s economy as a scale, and with this new box they’re basically coming in with a smaller, faster time to market, with all of its baked in services that are in its big Z mainframe, things like Hyper Protect, and Confidential Computing, to be able to address two markets. One, they’re addressing the down-market opportunity of database services. Two, the one that I think is potentially most interesting is coming out with a box that really can address the growing demand for FinTech. You hear so much about crypto and what’s going on in this space. Well one of the big problems is you need this type of technology of what is in the LinuxONE and in the Z mainframes to be able to take advantage of these opportunities. These boxes are expensive, you’re talking about well over a quarter million, in many cases it’s a multiple millions. It’s kind of like the supercomputers of the mainframe world.

A lot of times these startups that are doing a really interesting thing, whether it’s crypto mining, or FinTech services, they don’t have millions and millions of dollars. So they want to do this type of stuff using cloud, but that’s not the opportunistic or ideal place to be doing this stuff. IBM said we’re going to take advantage of economies of scale, and we’re going to build a box that you can get in for just the price of a small house, about $135,000, that would enable you to take advantage of the technology of IBM LinuxONE, and to be able to concurrently use it in deploying your FinTech or some of these database services. Now it’s a big addressable market that IBM has primarily been missing because of their entry point being so high. So that is kind of interesting.

It is from a competitive standpoint Pat, as I see it, probably the biggest disruptor will be IBM and Oracle going toe to toe here on some stuff. Because this really starts to compete with the database appliances, Exadata systems, that have come from Oracle where Oracle has been very successful. What’s more fun than watching IBM and Oracle compete? Two big tech companies that have been around forever, that are still in this business. Overall I think this is a big opportunity. What I look at here is the volume is big, it addresses a new part of the market, the Team Ross Mari, and the team over at IBM systems Azid has been very good, very creative. By the way, this business, we talked about their very profitable power and chips business Pat. This is another real windfall business for IBM. Everybody says what’s old is old, you and I have to agree what’s old is new, and the fact is they’ve identified a market here, it’s a highly profitable part of the business. In the cycles when IBM comes into market with the big Z, the recent being the Z15. With these LinuxONE, it can be the difference sometimes between IBM being able to deliver a quarter of profit, and not being profitable is their mainframe business. So adding to the lineup, expanding down the market, and competing in a space where there’s more volume opportunities was a good move, and something I’m bullish on from IBM.

Patrick Moorhead: Yeah, the same day as the new LinuxONE came out, IBM came out with it’s I like to call it these are my terms, not theirs, Mainframe as a Service. IBM Z like you said was 49% growth, updates had come in, entire systems would have been up in a huge way. But just to set the stage here, so IBM already has a public cloud, it’s primarily X86 based, it does have IBM Z, and I do believe it has some power in there. IBM also has a satellite, which is very similar to let’s say a Google Anthos, and a AWS on-prem infrastructure as well. Hey, what about mainframes? Mainframes almost by definition have always been on-prem, and typically you buy the hardware, and then you license the software. IBM Z already went software by consumption, and I wrote about that on Forbes, and I wrote a new Forbes column where they’re actually using Burst performance as a Service. So IBM is essentially doing Software as a Service, and what I mean as a service I mean licensing, and also the peak hardware. Without getting into some of the names that only IBM Z clients would understand like MLC, MSU, R4HA and SKRT. I’m going to just try to simplify it for the broader audience.

It’s interesting, the only thing that IBM would have to do to go as a Service, is to go as a Service for that initial purchase, which I believe they’re already doing under certain managed contracts. Essentially what we talked with Dell, which is opening that up to more customers. I don’t know… It makes a lot more sense particularly now that you can get IBM Z in standard rack sizes, standard power, where if you wanted to replace a bunch of X86 servers, you can plop one of these, or a Linux one in its place. It does scramble my brains a little bit to think that a mainframe that runs RedHat Linux, that uses containers and can go multi-cloud. It’s basically a giant server, yet we call it a mainframe, yet it’s essentially a giant scale up server. Cool stuff, Ross and his team are just kicking butt over there, and it’s really fun and exciting to watch.

Daniel Newman: Yeah it really is, it goes against the grain like I said. Trying to make a mainframe cool is a really tough job, and I think that’s why you and I are giving it so much credit to that team. Not only has it made it cool, but it’s also been an extremely important part of the underpinnings of that business.

Daniel Newman: Well actually right now, anything that needs a chip is alive and well, I don’t care what it is. If it’s a car, if it’s a TV. No one’s going to use a TV because everybody’s got an iPad, right? Well that’s not true either, I got a big old TV in my family room and I like watching it. You can kind of bite me if you think TV’s are going away. Did I say that? I said that. Oh well, that’s part of [inaudible].