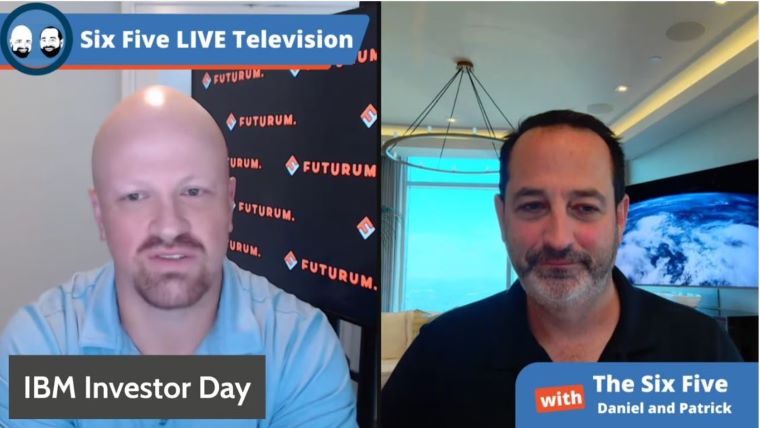 Patrick Moorhead: Let’s get into the next topic here. IBM investor day. Pretty sure this was the first investor day with Arvind leading the crowd. Daniel, what happened? What’s going on there?

Daniel Newman: Man, we have hit the investor day window. In a couple weeks, we’re going to hit earnings Palooza again. Pat, it’s just, all this truth serum. So digestible.

Patrick Moorhead: I know, I know. You’re going to have a lot to talk about on your markets show, Making Markets. For Daniel.

Daniel Newman: Making Markets. Yeah. If you haven’t checked that out, I do have another show. It’s my second favorite other than my bestie show here on Six Five. But I do get some of these CEOs to come on and talk to us just like we do here, but it’s more really diving on some of that earning stuff. All right, Pat, I only did that because you did that. I wouldn’t have done that.

Patrick Moorhead: Daniel, we got a… Every once in a while….

Daniel Newman: Your Forbes piece was tremendous, Pat. Should we just stop and take a look in the mirror really quickly and check our appearance?

Daniel Newman: All the people that are listening and don’t have the video are not going to appreciate this segment. Alright. So investor briefing 2021 came on a Monday morning. So straight out the week we were on it here. It was a long session. It was several hours. And so I want to focus in on some of my key takeaways from listening in on Arvind’s section. This is gonna be the stuff that the masses of you will get the most. If you are a big follower, every one of the business units had a chance to present and dive in. We heard from systems, and we heard from infrastructure and we heard from AI and quantum and everything else. We got some of that, but when it comes to what’s going on, the big picture here is IBM is about to complete the spinoff of Kyndryl.

And so the reason I think this investor day really made a lot of sense was the world wanted to understand despite the fact that the Kyndryl and the infrastructure management part of the business that’s being spun off is not some of what I would say were the core focus areas for IBM. Long short, I think everyone’s wondering what comes next, right? What is IBM going to focus on? What does this mean for the company? So this is really where I thought he was coming out to really provide some clarity. Arvind spent a lot of time talking about optimizing the portfolio. He wants to get the offerings more clear, make sure that it’s broken down. I’ll talk about that a little bit more when they talk about how they segment, then they’re going to report their earnings going forward.

Platform. I mean, listen, every company on the planet right now is using and understands the value of the platform and being more platform-centric. Everything within the IBM software portfolio is now an optimized to run on OpenShift. They’re focused on Cloud Native, they’re focused on microservices, architecture powered by Kubernetes. So that’s was a big part of Arvind presentation. I called it platform, platform, platform. Now you talk about original headers, that was original in my piece. The investing in consulting with, like I said, parts of the technology consulting going out with Kyndryl, Arvind’s kind of headers are we’re really about AI and hybrid cloud. Those were the two big areas that he really sees driving the company forward. So there’s going to be significant resources invested by the company and making sure that their services and consulting groups are able to help companies overcome the challenges of being meaningful, hybrid, deployment, strategies, as well as getting the best out of analytics and AI.

And he was really clear that the money is in hybrid cloud. The company knows it. The company knows the public cloud is big for IBM. Public cloud growth has not been on par with the AWSs, with the Microsoft Azures or even Oracles and Googles, but they have been able to make the public cloud and their overall hybrid cloud strategy work by focusing on being a leader in enterprise hybrid cloud. They’ve got over 3200 of their clients now leveraging their whole hybrid structure. The Red Hat acquisition was massive. It was a huge dollar figure, people kind of wondering would it work. If Red Hat deal hadn’t been done, I would be actually more concerned about the prospects for IBM than I am today. And I guess I want to just kind of make one or two mentions, specifically about post-Kyndryl, what I’m looking for.

Pat, IBM has probably for the past, I don’t know, how is it, 10 years now, kind of suffered from a sideways growth trajectory. Meaning they’ve gone down a little, they’ve gone up a little bit. It’s been kind of small movements in both directions. The Kyndryl move as I saw it, was all about accelerating growth. You have a company that wants to be looked at as a player in the most important secular trends, AI, cloud, 5G, automation, attached to telco, financial services, blockchain, quantum computing, and you’re growing one or 2% or going down one or 2%. I think Arvind identified that GTS, which is going to become… Kyndryl had become a bit of a boat anchor in terms of the company’s growth.

Being able to fully focus and lean in on the areas where they believe they’re aligned, which I mentioned hybrid, automation, AI. Making those the core, including with Red Hat is going to give them a much more realistic trajectory to start hitting high single digit growth, et cetera, et cetera. So with that in mind, I’ve gone a little long and thank you for letting me do that, overall strong days, some good movement from the company, but proof will be in the pudding pack. Company’s growth after Kyndryl needs to be faster than it’s been since.

Patrick Moorhead: Well, the good news is, is that first off, expectations for tech companies vary widely. You have some of the tech stalwarts and then you have kind of mega growth companies, not necessarily based on what maybe these companies are doing, quote, unquote wrong when you’re getting into single digit growth numbers, but it’s the fact that they have monster businesses and they’re getting into the higher growth markets that didn’t start those highest growth markets. Let’s say like SaaS or the public cloud. So the commitment that Arvind made was mid single digit revenue growth starting in FY 22, that set the bounds. That doesn’t mean the company’s not going to have 40, 50% growth businesses. They have that today in a hybrid cloud, but it’s just a smaller percentage as the overall and the Kyndryl’s spin, I like. Because it is a drag that is a declining business as a sector in itself.

And it’s really focused on automation as opposed to what I would call innovation. I’m sure Kyndryl and IBM would argue that, but I’m just looking at the big picture. And it’s not a criticism either. So we’re also looking at he made the cashflow statement, which is, hey, over three years, we’re going to have $35 billion in free cashflow at mid single digit revenue growth. That is the way you should be looking at us. Half the revenue is software and a third of that revenue is consulting. And I got a lot to talk about here, but I’m not, because we were going super long. But net for me was the reinforcement that the hybrid cloud is going to determine the degree of success for IBM for the next 10 years. And the linchpin in that is absolutely going to be Red Hat. That might be low value conversation, but and there’s the dogs, I love it. But that is it. And will Red Hat, can they get some of the… IBM loves to talk about the Fortune 50 and the Fortune 100.

A lot of business there, but you know what, Daniel? There’s a lot of business below the Fortune 100 that Red Hat is huge in and first, can they combat VMware in this space. Because essentially, the value propositions are very similar, but most importantly, can they combat the hybrid offerings of the native cloud players like AWS, GCP and Azure. I’m going to leave it there folks. We have a lot more to talk about it, but we must go on.