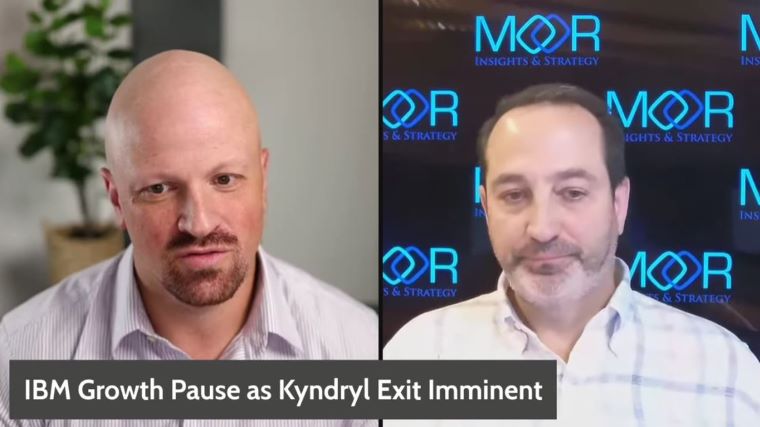 The Six Five team dives into the latest earnings report from IBM.

Patrick Moorhead: But let’s move to IBM earnings. IBM got hit pretty hard. There looks to be a little bit of a pause until the Kyndryl split, but Danny, why don’t you kick this one off?

Daniel Newman: That was a mixed result that kind of came in a little above on earnings, a little below on revenue. Listening to the commentary on the earnings call, seems that the GTS business has been an absolute boat anchor for this company over the last four years. But I mean, for a continued and sustained period of time. It’s time for that business to split off. It’s time for that company to focus on growing. You can absolutely [inaudible] a lot of things that would typically be moving or pausing. And they talked about this. Kavanaugh, the CFO, talked about kind of this Kyndryl pause. The sales slowing down, companies normally would be signing contracts or saying, let’s just wait until this deal is done. We’re a few weeks away. And this is really the start of the new era for IBM.

I don’t want to dismiss any quarter, but I think I tweeted something along the lines of, “I just don’t think this quarter matters.” I just don’t think it does. Of course, for short term traders, they’re going to be feeling the heat of a sell off, but for long term investors in a value company like IBM, this is all about getting the company to more significant growth. It’s been kind of vacillating between single digit losses and single digit growth now for, feels like a decade. It has not been able to sustain significant long term growth. It’s very driven by certain cycles like the Zed cycle or the Z15 cycle for the mainframe. Systems can’t make money late in the Z cycle. So when that starts to slow down, it’s systems just can’t perform. And so we’ve got to wait for the next generation. Ross Moore and his team, I’m sure, have something up their sleeve. But that’s going to be a requirement for systems to make money.

So even when Cloud is up, what it was, about 12%, I believe, was the number here. Red Hat was growing. It can’t offset huge under performances from the GTS business and it can’t offset the cyclicality of the systems business, especially related to the mainframe. So when I kind of look at this, Pat, I basically say, we need to give a two more quarters, I know this is a long time for most investors, to allow the spinoff to happen and to allow the company to really get focused on initiatives, which is all in, on Hybrid Cloud, and then of course, AI and software. Those are the areas where the company’s really going to put its focus. Then we need to start to hold it accountable to grow, Pat. It needs to grow faster. I mean, Red Hat was a great bet. It’s out with GTS, in with Red Hat. The future is Red Hat, the future is Hybrid.

The whole thing is being the Enterprise Hybrid Cloud company. It’s about connecting core to Edge, Hybrid Cloud, OpenShift, and doing it in a more meaningful way, but they have to catch up on growth with the public cloud players. I’m not talking about hyper growth, SaaS companies. I’m just talking about your AWS’s. I’m talking about, the cloud business needs to be growing 30%. That’s what the market’s going to want to see. When Microsoft in AWS, and Google, and Oracle are all growing that fast IBM’s not going to be held to a different standard.

So I’m not saying the whole company needs to be growing 30%. I’m just saying you can’t have, say we’re all in on this business, it’s a hyper growth area with a rapidly expanding TAM, and then constantly have growth rates that are a third, or a fifth, or in the case of Oracle, a 10th, the rate of their competitors or complimentary companies in the industry’s growth. So that’s what I’m really looking for here. I give them a pass on this quarter, Pat. And actually give them a pass on the next two quarters. Hopefully they’ll show some promise, especially on the Hybrid Cloud business, but you’ve got to let them settle. These acquisitions in a merger, or a spinoff of this size, is going to take some time to settle in.

Patrick Moorhead: So Daniel, this one’s a toughie, because I think we need to, first of all, review the commitment the company has made. And that is single digit growth overall. That’s all they’re committing starting FY 2022. Now I would like, I mean, just like I would like a red wagon, a new red wagon every year, for their Cloud revenue to be 30% every year. So it’s around a $7 billion business that’s half of what AWS is today. But Daniel, I don’t think they’re committing to that. And I think, and correct me if I’m wrong, what you’re saying is to truly have the stock move as opposed to doing what it’s doing today, because I feel like single digit growth they’re positioning themselves as the safe bet. Right?

Daniel Newman: Just quickly I’ll say, Pat, I’m basically saying they were getting single digit growth more than not over the past year or so.

Daniel Newman: No, I get it.

Daniel Newman: I get it. What, I guess, I’m saying is, where does enough growth come from consistently to offset these cyclicalities and such of other businesses so that they’re sustainably delivering those single digit numbers. So as I said, Cloud has to grow fast enough, and significantly enough to allow them to get to those mid or high single digit growth quarter over quarter as a whole company. That was what I was saying. It has to come from the Cloud business.

Patrick Moorhead: Yeah. Now the best point I think you made was, if Oracle is growing, and maybe a Dell or an HPE is growing beyond kind of mid single digits, then it’s a challenge. Now HPE is committed to that single digit growth as well. So it’s likely not going to be them. But to your point, the stuff that should be growing, most of it is growing. Right? GBS related Cloud revenue up 38%. Cloud and cognitive, Cloud software 20%, Red Hat, 23%. But maybe something like Quantum will be one of these big breakouts. I mean, I think they prob… We just saw InQ go public. And my guess is, is that IBM likely has 25 times more revenue than InQ when it comes to Quantum. I hope they would drop that at some point, because that could be an instant injection.

I don’t think the market’s giving them… I think it’s giving them zero value for Quantum right now to take them into kind of a mega growth. But a great conversation. Yeah. Probably not an indicative quarter of the future. It’s absolutely not. We’ll have to see next quarter, excuse me, when we get to the full Kyndryl spin out. And maybe we can even do a separate video on that.