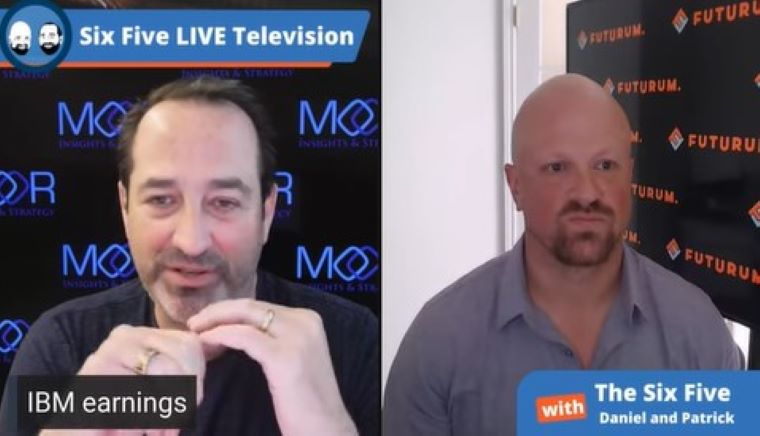 Patrick Moorhead: The pent up demand and the fear of inflation and all the horrible things that are going on. Well, what happened? Well, IBM basically beat on the top and they beat on the bottom. I mean, constant currency revenue is up a mind boggling 16%. Wait a second. Are we talking about Salesforce here? Are we talking about IBM? Right? EPS was up 43%. Pretty incredible. One financial metric that the street really looks at for IBM is $3.3 billion in free cash flow year-to-date. Interestingly enough, some people said that wasn’t enough, which I think could have led to the decrease in the stock price.

But listen, I’m not an equities analyst. I’m a tech industry analyst. So let me stick to the content that I know really well. So every division, by the way, I’m really loving the new simplified model. What does IBM do? They have software, they have consulting and they have infrastructure. That’s it. Sure they do a couple cuts across the cloud line, but it’s super, super simple. Software was up 6%, 12% constant currency. Red Hat was only up 12%, which I got to tell you, man, I really want to see that number with a two in front of it. But with that said, Tom and company had a great quarter over there. Consulting up 10%, almost 20% in constant currency. And it is amazing the delta between constant currency now with how strong the dollar is, heck it’s better than one-to-one on the Euro.

Patrick Moorhead: I know maybe it’s time for a trip to Europe. You can finally afford something like that, but hey, the star of the show for the quarter was Infrastructure up an eyeball popping 25% constant currency. Two weeks ago, Dan, I got a pitch from an agency that said the mainframe was dead and I replied and I said, you really need to do your homework. The mainframe actually isn’t dead. In fact, the z16 brought an absolute 69% year-over-year increase. Now, was that a surprise? Probably not because this thing comes in cycles and a year from now that number’s going to be really low, but it pops two or three quarters every few years. And, here we are. So overall Daniel, a very impressive showing even under, I would say the tough reality of constant currency, where basically if you’re in Europe or you’re in Asia, the dollar, goods are going to be more expensive because you can’t buy as much as you did before. So here we are, hats off.

Daniel Newman: Yeah. So you covered a lot of ground. One thing to add about Z though, only one month of the new Z cycle actually went into that number. So there is even more. So that 69% should be bigger next quarter.

Patrick Moorhead: God, could it possibly be triple digit, Daniel?

Daniel Newman: It could be, there is a realistic chance. It could be triple digit. And of course that carried the day for the infrastructure number. The Red Hat- I totally agree with you- that the Red Hat opportunity is significant. And if there was probably one thing that I wanted to dig into a little deeper is why that isn’t growing faster because as IBM has been aggressively expanding to not only its own cloud, but working with the likes of AWS, Red Hat is a facilitator of that growth. And Red Hat, by the way, does not require companies to do anything with the rest of IBM. So it’s just an overall, if we look at the cloud market growth and we’re going to say that IBM has a play in the whole public and hybrid cloud growth, Red Hat is such a massive opportunity. So to your point, seeing up in the twenties, really looking to see a track alongside what the hyperscalers are growing would be a really, really impressive point, but it is something to work towards.

The FX was really what drove a little bit of the sentiment the wrong way, Pat. I mean, essentially the FX is scaring people. Earlier in the week, Bill McDermott went on and talked about deals slowing across Europe as the dollar strengthened because companies are saying, well, we want to see the dollar weaken a little bit before we start deploying our money to new projects, because we’re going to get less for our buck. And so to your point here, if we’re going that way, we’re going to get a lot more for our money, but as money comes back, it is not as good. And so companies have big global exposure, because it’s not just the Euro, it’s the dollar all over the world. So you look at different markets, and again, big tech companies all have big global exposure.

The guidance basically stayed on pace. A little bit of curiosity, kind of when he says something along the lines of “still expecting high single digits with constant currency”, are people doing the math in their head and saying, “well, that’s almost zero in year-over-year”? And given that the growth in the last two quarters has been closer to 10% year-over-year without constant currency, are people doing the back math and saying, so the rest of the year may be sort of offset? Is that kind of what he was saying? I wasn’t able to fully garner and appreciate that, but something spooked the investors and it couldn’t have been the results because the results, Pat, were really good.

Daniel Newman: Yeah. Well, and Pat, by the way, VMware this was one of the reasons why when the deal got done with Broadcom and everyone’s talking about what a travesty and tragedy it is, and I’m kind of looking at it like they’re not growing that fast. It hasn’t been that impressive. It’s been Steady Eddy 10%, 10% now it’s fallen to even a lower number. And frankly, and I’m not knocking and I know this Tanzu is not the topic nor is VMware Pat, but hybrid cloud here is kind of the topic. A lot of the stuff I read on Tanzu, which by the way is why I think Red Hat should be growing even faster. So is that this is opportunistic. This is an opportunistic moment.