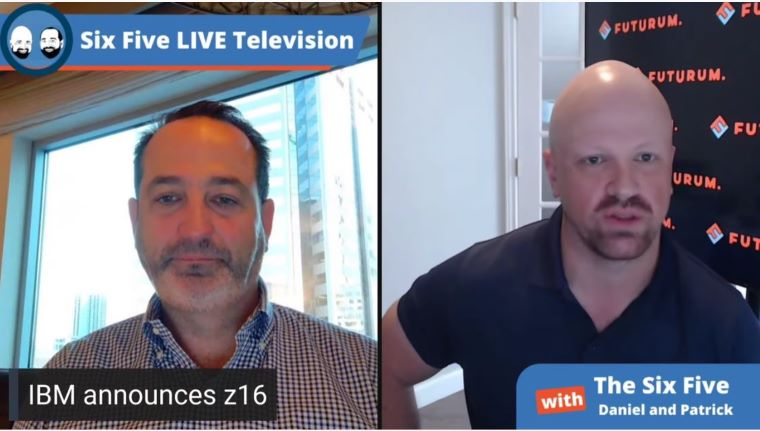 The Six Five team discusses the recent announcement coming out of IBM.

Daniel Newman: Let’s talk about a big launch. IBM z16. Now again, for everyone, there’s a cycle within IBM. This is an important cycle for its mainframe. And, by the way, you wrote a really great article that, would you say the mainframe’s dead? No, no, no. You said the mainframe’s not dead.

Patrick Moorhead: There we go. I know. I’m an industry analyst, but unlike industry analysts, we’re so proud of our content, we don’t put it behind a firewall. And yeah, so I write on Forbes and you got to have some sort of a splashy headline. And my headline was, IBM z16. The mainframe is dead. Long live the mainframe. Listen, I got upfront and personal in my first job with an IBM System/360 back in 1990, when I was at NCR. There were two big players in financial accounts, it was NCR and it was IBM. NCR had the edge and IBM had the big mainframe and the AS/400. So, I’ve been in and around these mainframes for, I guess, going on 31 years here. And, I like many, thought that the mainframe was going to die and was a colossal waste of money. I admit.

But six years ago I had a change, did a lot of research, visited the z folks in New York, and realized, “Wow, consumption is skyrocketing on mainframes. It’s hard for you to do a credit card transaction anywhere on the planet that doesn’t go through a z. It’s hard to do a retail transaction that doesn’t go through a z. It’s hard to name a bank that doesn’t have a z, or a retail.” And why is that? Well, it is a transaction engine. It is a transaction engine that does it quicker, more reliably, and safer than any other platform out there. And, I’m very careful with my words, I mean, like you, I research all the IAAS folks, I research all of… But, there’s a reason that it keeps on going.

Now, it’s not like they did a fire and forget. z16 is updated for modern workloads. And I would say the big points here are doing inference inside of the z. So, typically if you were doing machine learning, you would do the transaction, you would do what we call, mainframe guys, ETL out to another system, maybe an x86 system either doing inferences on the processor or a small NVIDIA GPU card, right? But now, you can do real-time inference. Well, what does that mean? Well, you can do credit scoring, you can do credit risk at the point of transaction, as opposed to having another system do this. I’m going to follow-up with some more workloads on what inference means for the mainframe. But I thought that was very interesting. Along with that, bigger, better, faster processor, the Telum processor, it improved performance per watt using less energy.

I did want to talk about one thing and just remind people. z is very much a modern platform, a cloud platform. You might be laughing right now, but here are the facts. It runs Linux, it runs Red Hat, Linux, okay? That’s optimized for the platform. And, it runs Red Hat containers. Surprise. So, by the definition of cloud, which is scalable resources, typically Linux, and using containers, you can do all of that on the IBM z. And now, you can do inference at the point of transaction.

The final think I’ll mention is that, it also supports quantum safe cryptography. And, well, what does that mean? So, in the future, you’re going to have different algorithms done by faster traditional computing systems, but also by quantum computers. And essentially, the new z16 is quantum proof in that those new future algorithms, you are safe and you can be protected from all of that. So, by the way, I need to do a little bit more research on how that’s possible, because it’s like, “Well, how do you know what’s going to happen in five years?” But anyways, very rarely if ever does IBM make a claim on z16 that isn’t backed by an incredible amount of thought and research.

Daniel Newman: Great dive. I’m going to add a couple of thoughts and keep us moving. But, first of all, a big for our IBM. On the financial level, something to think about too is, they do these launches of their z every 8 to 10 quarters. The last one was done in September of 2019. There tends to be an upgrade cycle that’s pretty significant. And in the wake of the spinoff of Kyndryl, it’s going to be more significant to the overall revenue number because that particular portion of the revenue has been locked off. So, the impact of a z cycle, it’s a very high margin part of the business. There’s been quarters where the systems business is legitimately carried by the z cycle and the profitability of the z. This is a product that the people who buy it, to your point Pat, absolutely know it is the only option. And they’ve stuck with this particular technology for a long, long time. And despite all of the innovation that’s gone on in cloud, usually it’s highly regulated industries and special type of transacting businesses that this is the only option.

I’m going to share a link in the show notes, our mainframe analyst, Steve Dickens did a deep dive and he basically broke down… He went through the 80 page red book and broke down the entire mainframe z16 announcement. And he found Pat, pretty much the same things you did. The on chip integrated accelerator is a big deal. It’s going to make a big difference for people that are in… It’s one of the most compelling upgrade reasons from past generations is what they’re doing with Telum and how they’re moving forward with the on chip integrated.

They’ve redesigned the cash, which is something else you focused on. That’s a little bit more of a transaction item, but if you’re in data… If you’re, sorry, in mainframe, it’s probably a high volume processing reason that you’re in it. And so, the updates to the cash apparently are going to give higher performance, about one and a half times capacity. They’ve got some upgrades in the memory they call RAIM, which is what they call Redundant Array Independent Memory. And that’s all about availability, which is a key aspect of this technology. They’ve added connectivity capabilities, security and encryption abilities, what they call pervasive encryption, which you talked about Pat, which I thought was very interesting and does require a little bit more.

And something else I liked that I want to dig into a little bit is what they’re calling their z security compliance center. As companies are under more and more duress to address compliance requirements. IBM is basically saying there’s a capability in z16 to simplify and streamline compliance tasks. So, that’s going to be an interesting area too, as poor the customers banks. I mean, a lot of them are banks. And so, compliance is a huge headache for banks. So, if IBM’s simplifying that process, I can see a lot of value there as well, so.

Patrick Moorhead: Yeah, a little bit of a boomerang here. I find it ironic that now everybody thinks that enclosed systems with custom silicon is now the rage, right? And, that’s exactly what the z has. I mean, z has had a custom processor since 1963, right? And its own software ecosystem, right? It’s an open ecosystem, as it uses Red Hat, but I just find it ironic that it’s the cool thing now. What is Andreessen Horowitz would say, “The current thing.” Right?

Daniel Newman: I think that’s what Musk said that he supports.

Patrick Moorhead: No, there’s t-shirts now, “I support the current thing.” Anyways, I find it great, it’s good to see the z team basking in the glory. They do deserve it. I mean, people have tried to kill the mainframe for 50 years. And consumption’s going up, so.

Daniel Newman: You should write an article with some analysis that says the mainframe is dead. And then, do something ironical, like, “Long live the mainframe.”

Daniel Newman: That’s a great title. It’s probably going to get… I don’t know. There’s probably 30,000 people in the world that care about mainframes of the billions. So, you’ll probably get all 30,000 of them to read it. So, it is a really great move. It’s going to be a big one over the next couple of quarters for IBM and we’ll have to watch how that plays out, both on their financials and in terms of winning customer loyalty.