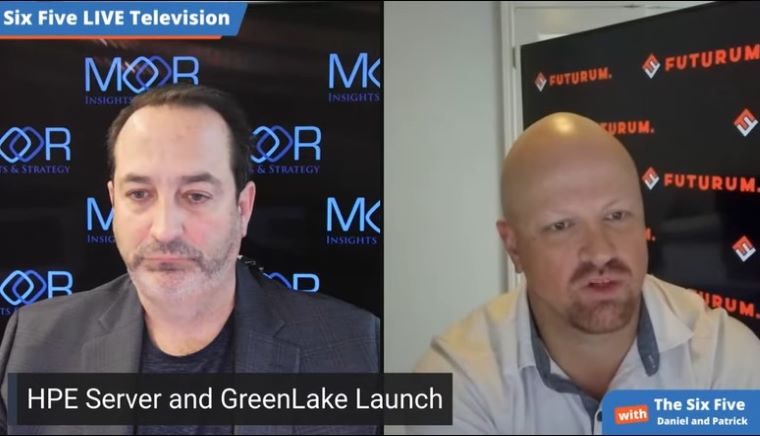 Daniel Newman: So let’s run into HPE and let’s talk about their new ProLiant Server. It follows a little bit of the VMware theme in what they’re really doing. It wasn’t just servers, it’s about GreenLake.

Patrick Moorhead: Yeah, so my thought is that I can cover the server part and you can hit the GreenLake piece. So HPE, as you know it, is a very successful infrastructure company, particularly in servers. They do pretty well in storage and networking with the Edge networking but they’re particularly solid on the compute side. So everybody is wondering what the company will do next. Now HPE has shifted its strategy from tonnage of volumes to value, which is a coded way of saying higher performance, higher value add making money. They don’t anticipate in the money losing or low margin areas like Hyperscales, scaler or even really leaning into some of the pedestal servers are out there but when it comes to Racks, HPE is very strong and what they came out with on Gen 11 was to come out with a intuitive cloud operating experience and part of that is GreenLake, but part of that are some of the tools like HPE OneView to manage the infrastructure, HPE iLO for embedded server management and then of course GreenLake for compute ops, which I know you’re going to talk about.

One of the areas that HPE leaned into first across all of the vendors is hardware-based security by having a proprietary ASIC on there as one of the first boot, but essentially doing a, first of all, secure supply chain, having a silicon route of trust, which you know and I know is super important, processor at a station to make sure somebody didn’t put a processor into the same socket that isn’t supposed to be there. Protected firmware and a protected TPM drive and storage controllers, that’s below the operating system line. And I give HP a lot of credit in leaning into that and I think it’s a kind of a testament to where the company does well, which is highly regulated and government institutions. But performance, we love performance. You and I love chips, the company is going all in on the new AMD chips that we’re going to talk a little bit later and obviously they’re going to go all in on Sapphire Rapids.

They weren’t actually allowed to talk about those chips, it was more like hey NextGen processors and of course the first Gen 11 server was based on an Arm-based Ampere design who is very quickly moving up the food chain and making a major impact in particular cloud native loads that want single threaded, reliable performance with enough bandwidth to handle all those cores at an acceptable cost. A quick correction, HP hasn’t announced a Sapphire Rapids platform yet, but I’m expecting it in the fourth quarter. So good stuff. I’m going to leave the rest over to you Daniel.

Daniel Newman: Yeah, no absolutely. There wasn’t a ton left there but I think you hit a lot of the key points and I think they’re making some smart hedging with their chip strategy, with their silicon strategy over at HPE because I think they want to make sure that they don’t close any doors, keep up with the newest technology, make it all available. They’re also being really focused on the service offerings, they’ve expanded their point. Next services as it relates to the Gen 11 specialized technical experts are going to be there that are going to be able to deliver support within the security constraints. They’re also really focused on green linking. I use it somewhat as a verb, but the idea now is there’s going to be the opportunity to basically do it at a pay as you go on all these systems and it’s a consumption plan and that’s just at the core of everything that HP is doing right now.

I mean they are legitimately, as a company, trying to move all the revenue from prime to consumption and GreenLake is the path to that outcome. That was something they really focused on. If you notice, Pat, when I mentioned the VMware deal that was all about VMware for GreenLake, you notice these new server offerings, they’re making sure that it’s basically bundling it with the GreenLake license so that you can quickly get these up on GreenLake and they can add that to that GreenLake number that they’re building. So you know, hit that tech on the head, Pat, with this. I think your whole strategy as it relates to offering AMD Intel and Arm is the best of class, best of breed for this current market condition. And the GreenLake and Pointnext editions are just how the company continues to execute on its growth of consumption and growth of services, which is super important to all IoT.