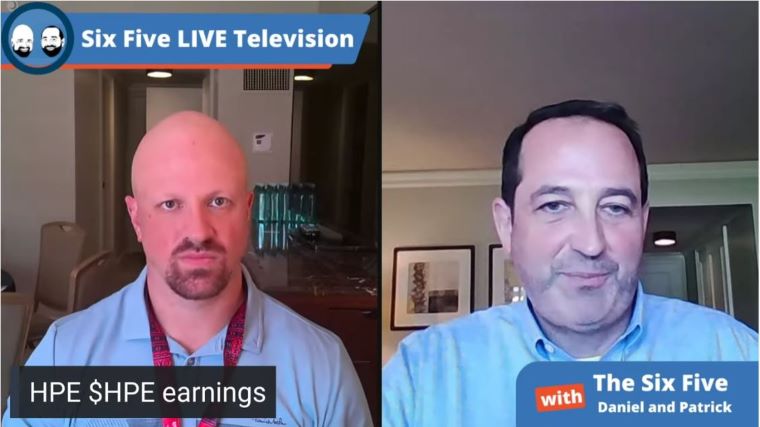 Patrick Moorhead: So I guess really what I want to really take the macro level here and I think HPE is delivering on per promises. You might not like their strategy. You might not like their promises, but they’re absolutely delivering on that single digit revenue growth and their strategy of segmenting growth businesses, core businesses as a service makes sense to me. Because when you look at the growth in obviously what they consider their growth business, which is intelligent edge, you’ve got double digit growth, and that’s incredible. When you look at as a service, I mean, as a service orders up 61% in 2021, as a service ARR up 36%. Cash management, just core promises that they make, they are delivering on the promise, and I think what has to be frustrating for the folks at HPE is the fact that okay, they make promises and there’s a certain price target, they hit those promises and then they get beaten up out there in the marketplace.

Now, I totally understand this quarter when you don’t give a very good outlook, regardless of the reason, even if it’s supply chain, you’re going to get taken to task. I think the order growth rate, I think it was around 16%, I think that was a plus for the quarter. But again, the stock price is based on the feature cash flows item and this little blip in the next quarter and they got hammered on, which is too bad because strategically they’re doing exactly what they promised, and I don’t like to see that, I’ll be honest.

Daniel Newman: Yeah. It’s a difficult situation for the company, they’ve been hard in a pivot now for multiple years and that pivot is going to take a few more years. But I think at the same time, it was a necessary change and at some point the market will appreciate the efforts of the company. I largely turned my attention to the recurring revenue numbers in GreenLake for the business. It’s not because the other parts of the business aren’t important, it’s because long and short the market doesn’t value capital equipment in technology very highly, but they value recurring revenue extremely highly. The multiples are two, five, 10, and sometimes more times both trailing and forward guidance, depending on the exact company that you’re looking at.

The company made this commitment by the end of next year, to be everything as a service. It’s trending towards 800 million a year in recurring revenue, it grew with 36%. They’re targeting on a category basis to, to hit 35 to 45. So they’re meeting their targets, Pat, as you said, they’re hitting those kind of baseline numbers. I think it could benefit by of course, growing faster. I think they’re going to have to continue to expand their services, but at the same time, I look at the offering, I look at GreenLake Central, I look at the fact that when you compare and contrast, because I will not count out Dell, I will not count out Cisco. Lenovo has been extraordinarily successful in there, but in terms of having a very complete well thought out offering, that’s been built from the ground up to truly kind of support the enterprise and the complexities of hybrid and multi-cloud, GreenLake Central and a number of the different offerings that have come from the company have been really well designed.

They’ve made some good wins. They’ve got some good partnerships with companies like SAP and Splunk and overall Pat, I feel like it doesn’t really what the company has come forward with, the market’s just a little bit bearish on this capital equipment group. I think you look at Cisco and Dell, just as a quick contrast, their growth was only slightly better and it was better, and you got to call out what is, is what is. But in a lot of cases like Dell has had an extraordinary result in PCs that has really has backed it’s bigger growth number, its last quarter was amazing, but I mean they have like 30 plus percent growth in PC. HPE doesn’t have that luxury. Even Cisco has that massive service on that’s attached to all their hardware, that’s always been huge, and then they got WebEx too, which is another big subscription revenue that hit that secular trend of collaboration.

HPE was one of those businesses that it’s most of its subset, besides maybe Aruba was really hurt during the pandemic by the lack of on-prem infrastructure deployments. So building out this hybrid plan, building out a consumption model, getting it to market and scaling it is not an easy task. But I do feel like you said, the company has been meeting its promises, it’s been meeting its growth rates, guidance, unfortunately right now is a trigger, and when your guidance isn’t good, it can lead to a massive sell off. Even when your guidance is okay, it can lead to a pretty big sell off too which by the way is exactly what happened to Salesforce which, Pat, what a segue, right? It was almost like I did that on purpose.

Patrick Moorhead: That was good, I thought it was good.

Daniel Newman: Yeah. Thanks man. I practiced that one. I was in the room for about an hour before we started recording and I was like, “Oh, I’m going to practice some transitions.” I’m going to do this. No, I’m just kidding. Guys, whatever you’re seeing out here, this is all natural talent, there is no prep here on this podcast, or is there? I don’t know, I’m not going to tell.

Patrick Moorhead: Is it Friday already?

Daniel Newman: It’s got to be somewhere. I think it is in Asia. Maybe not though because in Hawaii here it may still be close to the end of the day.