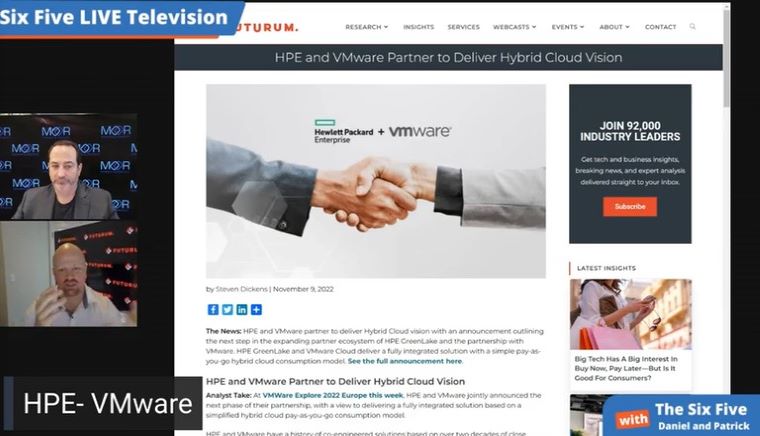 Daniel Newman: HPE’s made some different announcements. They had their VMware had their explorer event in Europe this week and one of the big announcements that came out was actually a partnership between HPE and VMware deepening.Now interesting on a few fronts. The first front is obviously this leaning in is just showing that further reiteration of what the future of VMware is going to look like. You know what I mean by the future of VMware is we all know as part of Dell it did run largely independently, but now as it’s starting at this process of the finalization of the Broadcom acquisition, it’s going to look different and I think you’re going to start to see more other partners leaning in even further to this opportunity to be aligned with VMware, that talk about your multi-cloud comment Pat, this is the multi-cloud era and companies like HPE that are trying to sell a story about multi-cloud are going to be looking at partners like VMware to help them accomplish that. Now, VMware is deeply entrenched in many enterprises and is, from a virtualization standpoint, absolutely core. The future of its technology built on Tanzu, et cetera, where that’s going to go with containers.

That’s all a little bit to be seen but right now, HPE basically looked at its background that they have a 100,000 combined global partners. They have a combined 25,000 experts, 120,000 combined customers out there. And GreenLake, which is HPE centric motion, has been heavily adopted by now. About 80% of its top 100 customers and so what HP is really leaning into isn’t just a partnership. That’s always really been there, it’s this idea of consumption. It’s this idea from edge to cloud. GreenLake for VMware is going to be able to provide you with this fully integrated hybrid cloud deployment model for the partners of both HPE and VMware and using GreenLake, they can do it on with a consumption motion, which is what a lot of companies are looking for. I see this as a very strategic partnership for both companies. I see VMware leading into more and more strategic partnerships as part of Broadcom.

This was a big purchase by Broadcom and I think they’re going to really look to this partner ecosystem. And of course they’re going to need to make friends because that’s one of the controversial things is how well are they going to be liked as a software company? VMware was really loved by the IT industry. Broadcom is really loved by the street, but are they going to be loved by the IT industry? And I think these kinds of partnerships could help solidify that so both companies coming out together, taking advantage of this joint ecosystem, selling it as a consumption model. I think it’s a good move. Of course we’re going to have to see how everything lands as VMware Broadcom finalized the merger.

Patrick Moorhead: Good insights, Daniel. Hybrid cloud is real and multi-cloud is real. The industry is just waiting for vendors to catch up. I have yet to talk with a major size enterprise that isn’t already multi-cloud but the challenge with multi-cloud is you have to have a separate DevOps sec team to manage each one of these separate clouds. And that really is inefficient. So the industry’s trying to look for connection points to make it easy and one of the foundational beliefs that I have is that neither Azure or AWS is going to have APIs to make it easy for multi-cloud because they would prefer that you come in and use all of their stuff. I understand that, but it’s only a matter of time before customers reject that and in fact they have rejected it because there are different cloud providers that provide different levels of capability including so sovereignty, security, performance, the ability to do data and analytics.

So I like this partnership a lot because I like the way that VMware is setting up their hybrid cloud capability to limit the amount of resources it takes to properly do multi-cloud and I love GreenLake from its as a service capability and its ability to put this together. So it literally is one of these peanut butter and jelly moments. And it is very interesting to see HPE or VMware partnering with HPE versus going all in all the time on Dell Technologies. This is an example of VMware’s growth strategy, which is becoming and looking more of a neutral party as opposed to leading all the time with Dell Technologies. So I do like it and it’s interesting as I get to look at the deal more and as I am starting to research Broadcom and it’s management, I think I could be starting to warm up to this deal a little bit more.

I do know that Broadcom CEO, Hock Tan has been traveling relentlessly, meeting with customers out there and in some cases him and Michael Dell meeting with doing two on ones with customers to talk about the future of VMware. I like the VMware multi-cloud play. It’s different from even the OpenShift play that Red Hat is, it’s a little bit different. I feel like VMware is obviously leaning into, they have containers, but they are the defacto standard for VMs and they put a lot of resources into fabric for security and fabric for managing multi-cloud workloads as opposed to OpenShift, which is really focusing on owning that container level, that container layer and having a compatible container. And by the way, operating system layer around there. So good stuff. We’ll keep our eyes on this into the future.