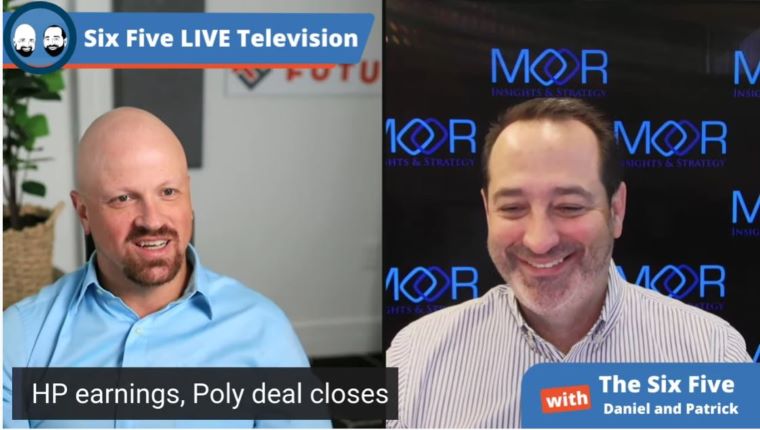 The Six Five team takes a look at HP’s earnings and their acquisition of Poly.

Patrick Moorhead: HP other earnings, and I think everybody’s celebrating that the Poly deal closed.

Daniel Newman: I was having so much fun though, because it was anytime I can run down the, beating Apple or the battering ram, by the way, I’m doing that while using multiple Apple devices that I pay for, so I feel like I have more of a right as a consumer to be angry and I think if people actually just admitted it. Chances are Amazon won’t get enough credit for this and Apple will never get proper credit for how…

Anyway, all right, going onwards, so HP, top line missed, bottom line hit. Last week when Dell reported it actually had a somewhat solid PC number, and so there’s a lot of conflictive information. Pat. Intel basically come out with its early numbers. Well actually TSMC came out really early with great numbers, then Intel came out and said, “Rapid deterioration of demand for PCs.” Then AMD came out and was like, “Ah, maybe not that rapid. It’s a little bit rapid.” And then Dell came out and were like, “Wow, that’s not bad.” But Dell also drew down quite a bit of backlog to hit that number and then guided down, so we’re like, “Okay, we’re starting to feel this way.” And then basically HP came in and said, “All right, hold my beer. We’re going to confirm what’s going on. The market for consumer’s slowing drastically and the market for commercial is slowing less drastically, but overall PC demand is down.” So on a year, over year basis, HP was down.

Having said that they did hit on their earning, so if you’re in this era of earnings are more important than revenue, then they did their job. Now it wasn’t all bad. HP did hit on their growth areas, their growth target areas, they’re still seeing double digit growth. They are still seeing some strength. I believe work stations are actually performing pretty well for the business right now, and of course, a number of the other areas like print are seeing a bit of a slow down. The numbers, Pat there wasn’t a ton in it other than like, “Hey, we’ve been saying consumers going to slow.” Now it’s being validated, and I think largely even on the companies that did better, all the signs are that we’re going to slow.

It’s just where we are on the curve of that slowdown right now, and so as much as I’d like to say, there’s a ton. You and I had the chance to hop on, we talked to Enrique, Laura CEO of HP, we got to ask him some questions. He actually validated my exact point right there. He said, “Commercial is sitting in a better position than consumer, but overall that this is what they are seeing today.” It looks like they guided down a bit as well, they had to pull back on guidance. Not necessarily a great earnings moment in this current state, but it is really pretty fair as to what everybody is seeing happening, so hopefully this is the reset for HP where they’re resetting, they’re guiding down a little bit and then they’re going to get back to starting to beat. Of course, they claim that there’s some general macro headwinds with interest rates and the consumer, and there’s also some delays still. We’ve seen a little loosening according to what Enrique shared with us, but it’s still not, supply chains still aren’t optimal.

The only thing is the company has been pretty aggressively doing dividends and stock repurchases, which probably to some extent has been impacting how it’s share prices stayed up throughout this whole thing, but again, we’re not equities guys, that’s just a little bit of an outside assessment, Pat. I’m going to turn it to you because this is the part I think is great is, the company did pull forward the acquisition and finalization of the deal to buy Poly, and so I won’t say too much because I’m going to give you the oxygen on this one, but I thought that was a really good deal for the company. Poly’s been in a bit of, it hasn’t seen rapid growth and I think with HP, the two together have a synergy to meet this remote and future of work expectation, and I think this is going to be a really good thing for the company.

Patrick Moorhead: The one thing I will comment on is on the earnings is that HP is losing market share in areas overall. Dell really stole the quarter, I think from everybody in terms of how it did, and again, I’m not, these are just using facts here. The client group at Dell was up 35% year on year, Lenovo was down and HP was down, so it’s clear that Dell gained market share and I think that HP has really been on this. I think Dell was balanced by very good financial, how they did financially and in the end, that’s really what matters, but I have to wonder how long can HP continue to lose market share? They’re very similar in unit market share to Dell right now, and Dell really doesn’t participate a whole lot on a unit basis in consumer, they really try to focus on the high end, so that’s what I’m going to be looking for as we go into the future here.

And I think printers are being printers and I’m not surprised in this odd hybrid work environment, how both of those businesses are down. On the Poly front, let’s talk about that. I love this acquisition and Daniel, I think I’ve told you this before, I recommended to every one of the big PC folks that they go and buy Poly. Why? First of all, we’re seeing this movement when it comes to this type of equipment from facilities to IT, and that’s because data is moving along with it, and these decisions are more and more being made by not the facilities folks who used to take care of rooms and their electronics to IT. Also Poly uses industry standard components like Qualcomm processors and Android operating system to achieve what they want to achieve, so I love this acquisition, I can’t wait to see what happens. I’m really glad to see Dave Scholl is going to be the president of that division, so good stuff.