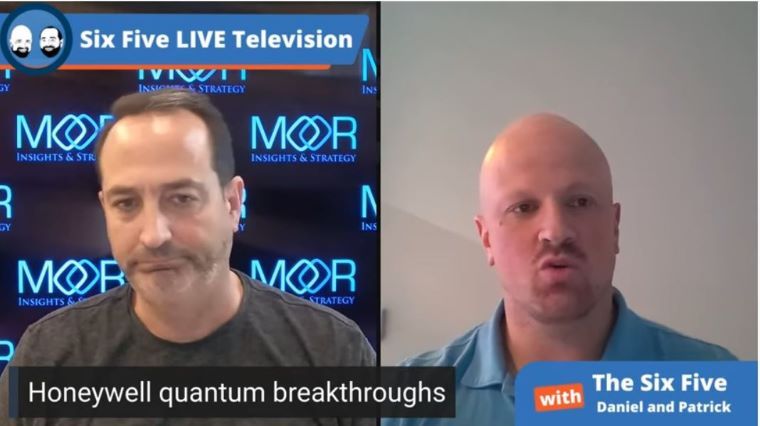 The Six Five team walks through the important quantum milestones that Honeywell has achieved.

Daniel Newman: All right, let’s go to the final. We talked about IBM Quantum. Let’s talk about Honeywell Quantum. Pat, this is something we talk about quite a bit on show, making quantum cool again, making quantum cool, and making Honeywell cool. Honeywell’s a really interesting company. We’ve talked a lot about the fact that more and more becoming a tech company. At our Six Five Summit, we had the CEO, Darius Adamczyk join us. We also had Tony Uttley, CEO of Honeywell Quantum join us, and made a special guest, Ilyas Khan of Cambridge Quantum Computing, which ended up announcing right around the time of our summit… Yeah, maybe it was because of our summit, but they happened to announce a new joint venture, 55% owned by Honeywell that would be Honeywell, Quantum Systems and CQC together. Well, this announcement included three breakthroughs that for the first time, the two companies were going to co-announce. So despite the fact that this deal has not completely been announced and formalized yet, that’ll happen later in the year, this announcement did put some breakthroughs of the companies on the map.

So let’s talk about what they are. The first, Pat, remember when we were talking in quantum volumes of under 50, when we first started talking to Honeywell? It was just a few cubits. Well, they were able to achieve quantum volume of 1024, doubling its record from only a quarter ago. So you see how much faster this is getting. And with ion trapping, as we know, these things tend to have more longevity because of the way these cubits are managed in the ion-trapping platform versus superconducting, which has its own value. But in this particular case, this was a big breakthrough. They’ve moved very quickly in just a couple of years.

The second was something called real-time error correction. Well, the state of the cubit has to remain in a consistent state so that they can actually handle solving the problems that you’re applying the quantum computer to solve. Well, if the errors aren’t corrected in real time, the outcomes will not be good. So the ability for this system to actually correct itself in real time is a big breakthrough, and it’s something that Honeywell has been talking about for a long time, but has been now able to demonstrate.

Then the third was an announcement from CQC. CQC, really if you don’t understand, Honeywell builds the physical, the hardware of the machines, CQC has always been a partner, they build the software. So you think about, as we move things from hardware to software, we moved to software to fine, we moved towards containers and we moved to the DPUs, all the things we talk about regularly on these shows, this is kind of the same thing. We’re starting to apply software, whether that’s simulation, whether that’s putting a simulation into Azure or using Amazon Bracket to do quantum simulation from a computer using an interface, it’s the software that’s going to bring this stuff to life. Well, CQC has been working on an algorithm that’s going to enable these quantum machines to be more efficient, effectively doing bigger and larger and more complex calculations using fewer cubits. So it announced that it’s been able to achieve this, it’s got this new algorithm and this is going to be really important for quantum going forward.

I’ll leave this thought here. The future of quantum isn’t really so much just about these machines and their ability to maintain an error-free or low-error state. These machines are something else. They’re very wild. If you ever see one, you’ll know what I mean. You check the picture of the blog posts that Pat and I put up about these, it doesn’t look like a computer in any way that you think, but it’s really going to be a marriage between classical computing and quantum computing, and it’s going to be software that you and I and everyone else on the planet can manipulate the way we do our CRM, our ERP, our productivity, our collaboration, our web experiences and our apps, that are going to use the power of the quantum computing to solve problems that our classical computers either can’t solve quickly or can’t solve at all. That’s when it gets done. Don’t underestimate the value of software when you’re talking about the future of quantum.

Patrick Moorhead: Wow. Daniel, you just sound like a quantum computing expert or something.

Daniel Newman: Thanks, buddy. I practiced that all night.

Patrick Moorhead: I know. I think we’re going to have to get a propeller for you. I liked this trifecta of announcements because it hit on nearly everything that’s important. So quantum volume, which is raw performance with good cubits, the error correction that is required over time because you don’t have perfect cubits that last the whole time, and an algorithm which increases efficiency. So I like the trifecta. Even though the deal’s not closed yet, the JV, the new company doesn’t even have a new name. But we have CQC and Honeywell working together on announcements.

Now, they were always working together before, but now it’s going to be more like a marriage as opposed to dating. So I like the way it was rolled out. It hit the three elements that make the quantum world go around. I don’t know about you, Daniel, but I am honored to be part of this as we go in the future because if you look at the different eras of computing, you and I were not around when mainframes first came out, but they’re still here. We were here for client server and then cloud computing and mobility, but this is different. This is going to reset everything, I’m convinced, even though it is the third or fourth try for quantum computers. It took AI and machine learning three or four rotations to be real as well.