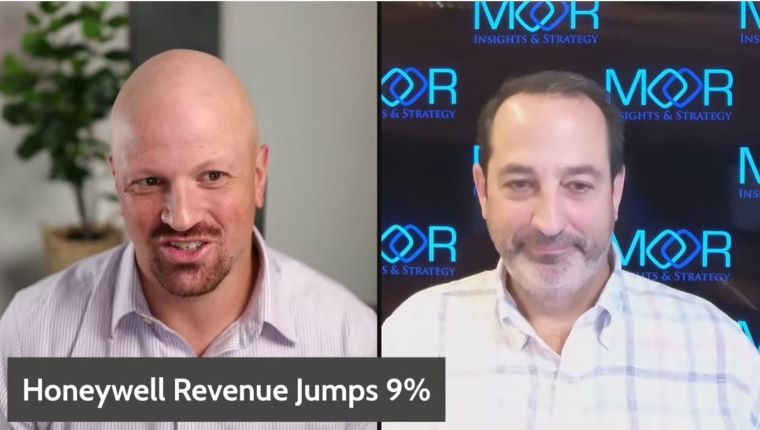 The Six Five team talks about the latest earnings report from Honeywell.

Patrick Moorhead: Let’s move to Honeywell. Honeywell had their earnings this morning, and net-net they beat EPS by 1%. It was a revenue miss by about 2%. And in pre trading right now, it’s looking about even to about down 1%.

Daniel Newman: The headline that you get from Honeywell and the headline from the street are a little bit different here. I look at a company with the long, deep industrial roots growing, having 9% jump is a pretty healthy jump. I mean, you’ve got to weigh in for inflation right now, you’ve got to weigh in for the economic situation, but this is another example, a little bit Intel, where it’s like, you’re still growing and that’s good, but the street, we’ll see how they respond. I think it’s going to be less volatile for Honeywell. The reason I think we keep coming back to Honeywell, besides the fact that we’ve had the benefit of having a lot of access, being able to talk to their CEO, Darius Adamczyk, working with their quantum team, getting to know the forge businesses that it’s kind of a little bit of a broken record, but it hasn’t seemed to be fully appreciated by the market yet.

Honeywell is an industrial company that’s in a significant transformation to a technology company. And so every time I look at the quarterly numbers, what I’m kind of trying to do is get an indication of how well that transition is going. And so when I looked at this quarter, to me, this is still a company that’s very balanced. We’ve got the Quantum business being spun off with CQC, but across it you’ve got these SaaS applications for safety and productivity. You’ve got Forge for the edge, and IOT for manufacturing. You’ve got the technology business for the buildings. You look at something like return to work and where does a company like Honeywell fit in? And all I can say is we’re going to be absolutely hyper dependent.

And then you start to look at areas like ESG, Pat, which you and I love to talk about. And when you start to think about how a building provides cleanliness, meeting environmental standards, safety for people who enter and exit these buildings, and the footprint that companies leave, we’re going to be looking to companies like Honeywell to be building solutions that are going to integrate with, I talked about ServiceNow last week, or Salesforce, or Microsoft, or Amazon, or any of these companies, Google, who are building these ESG footprints, this data that’s going to come off of all of these edge, and geographical buildings, and locations, and jet engines, it’s going to be really, really interesting. So overall, I’ll be candid. Trying to find as much to talk about in the tech end of Honeywell as there is to with an Intel or IBM is a little bit hard. It’s a little bit nascent for me. But I think the real story here is, is the company making that leap? We keep talking about it.

And so as I look at this, you see 3% up on building solutions, but then you see productivity, Pat, jumping 21%, which is where a lot of the software lives for the company. Workflow solutions, productivity solutions. So you’re starting to see indicators that the investment in these technologies at the edge and within these buildings are growing. And that frankly, I think Honeywell’s in a really interesting position. But you’re right, they did miss what the street was looking for. So even though they grew 9%, not quite enough to make all happy. But in my opinion, those are the things we should be looking for. We should be looking for where’s the growth in software.

And I’ll be candid, Pat. I keep putting pressure on the team over there. Guys have to start breaking this tech out. We need to know more about Forge. We need to know more about the building tech, the actual application investment that’s going in, especially now with Quantum spinning, because that was one of those really strong, disruptive technologies they we’re investing in. And although they’ll still be invested in it structurally, it will no longer be under that broad Honeywell ticker. So, that’s kind of what I think. And I think I’m really hopeful that your eyeball there isn’t bugging you, too.

Patrick Moorhead: Yeah. Sorry about that. I was considering taking myself out of the stream, but we’re live. I’m drinking a monster. I’m drinking from my Starbucks here. By the way, no, we are not being compensated by any of those companies. Wish we were.

Patrick Moorhead: Exactly. Listen, Honeywell’s an industrial that is branching out into tech, and I’m amazed that they grew it all. They need real materials to grow. Right? And guess what? We’re in a massive supply chain challenge. So a lot of the things that Honeywell has to make relies on the supply chain that is currently completely messed up. And not just electronics, but steel, right? Things like plastic, and things like that. So I am amazed. And I’m looking forward to the CQC Honeywell merge and spin, and just to see kind of the value in. And I believe Honeywell’s going to have 51% still of that deal. So I guess it’s not necessarily a full spin, similar to something like a Kyndryl, but I think there’s a ton of value there. And I’ll get back to INQ that set the bar, and it is likely that Honeywell and CQC has at least as much revenue as InQ. And I think we could pretty much safely say that the street is giving Honeywell zero credit for Quantum right now.

Daniel Newman: I think you make a great point. Quantum’s going to be a bigger focus this year. And all the companies that are in it eventually it’s got to start being added to those numbers.

Patrick Moorhead: It is. And I’m pressing all companies now that there is a certain valuation tied to at least a revenue number with InQ, now is the time to bring it out. Right? And if you complain about not getting value for Quantum, show your numbers, right? Show your backlog. Let’s talk about deals. Let’s get it out there. And anyways, I know I’ve been on calls with you, or we have basically been saying the same thing. So I know you agree.