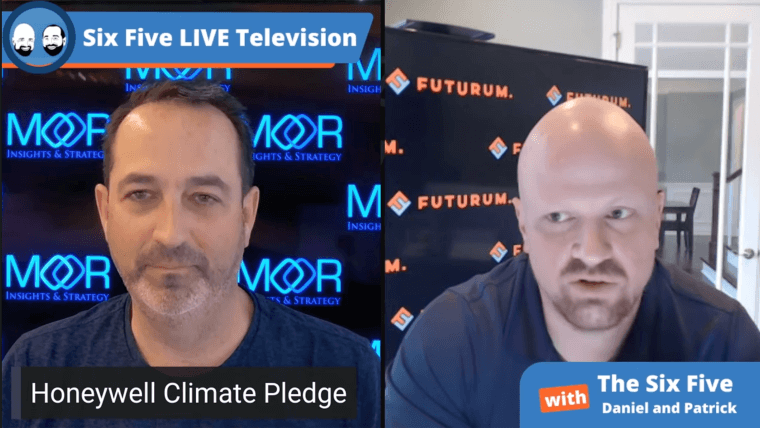 The Six Five team talks about Honeywell’s climate pledge to carbon neutral by 2035 as just the latest company to make such a big sustainability pledge.

Daniel Newman: Let’s end on a little quick heart warmer, one of the things that we talked about a lot. And we mentioned this with the Amazon, part of our conversation has been, you know, ESG, and companies are being more and more held accountable to be thinking about how they’re giving back for the resources they take from the planet. Well, I think we’ve probably talked more about on this show, as it’s become more of a tech company, whether that’s been an IoT edge SAS business, or its quantum business. But the company also has been making a big push this week to accelerate its carbon neutrality.

In fact, we talked about the 20-40 pledge that has come out from Amazon. Well Honeywell said hold my beer and said, we are going to push to do this in 2035. And that CEO, which may hear more from us soon, you know, came up and said, “Look, we’re going to really work hard.” But what I thought was actually most interesting, Pat about the announcement, and I did a little write up and you can check it out in the show notes. A little research note on this is the company has been quite active in its carbon neutrality, and in it proving its footprint for years. And so being present, being vocal and being visual, we’re in a time of importance each day, just a couple quick stats. Since 2004, the company’s reduced its greenhouse gases by 90%. But since that same time period has become 70% more energy efficient and has launched over 5700 sustainability projects. Now there’s a bunch of other data points and the company shared it, but I think the key here is that going green and creating pledges, all that stuff is great, but a lot sits in the actions. The actions speak louder than words, do companies actually do stuff? And as I said, avoid going dark after making these pledges. Because when you make a pledge that’s 14 years out to a world that can’t make 14 minutes without checking the headlines. People forget things very quick. Oh, when he was making a pledge, Oh, I forgot. We need to hold companies and enterprises accountable to stand up to these pledges. And providing this kind of data and doing things that matter along the way is going to be a really important detail.

Patrick Moorhead: That’s good analysis and good sentiment and I agree with you. The exciting part for me related to Honeywell’s climate pledge is, Honeywell is OT. Right? And with Forge and quantum they’re going IT, but their customers are factories and things that create a lot of pollution. The cool part is that anything Honeywell can do will rub off on their customers. And I think that’s kind of this network additive effect, but Honeywell is really on the move. They’re impressive. Even though I still have to explain what they do and IT to people Darrius getting on CNBC all the time is pretty cool. And getting the name out there. If you’re into quantum, and you have one of the best EPM platforms out there you are tech. So anyways, I’ll stop here.