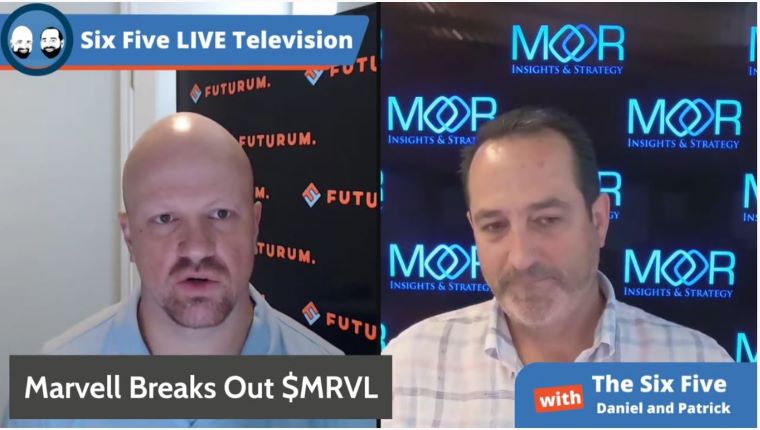 The Six Five team talk over the latest earnings report coming from Marvell.

Patrick Moorhead: Marvell had a very good quarter. And by the way, Marvell is all about data-centric chips for the data center, and the cloud, and the edge have done a really good pivot here. I think the big highlight here is revenue is up 48%, which is phenomenal. Data center was 40% of their revenue. That to me, clearly shows this four-year turnaround here where they were primarily consumer. Consumer and a little bit of storage. And through acquisitions, through divestitures they’re at this position here.

Biggest thing, which is in here, the breakout. They broke out their business and Daniel, you and I both know that as a sign of confidence. We talked about it with Qualcomm and we’re going to talk about it here with Marvell. Their new breakouts are data center, carrier infrastructure, enterprise networking, consumer, auto and industrial. And what did we see there? Well, we saw what we expected, that consumer, as a percentage is down. In 2019, it was 37% and now it’s 16%. Other big shifts, data center was 27%, now it’s 40%. So essentially, these breakouts are just another affirmation that the strategy is working and I also think providing confidence to consumers because more information is always better for investors.

Daniel Newman: Yeah, it was a very solid result, what? 48% revenue on a year. Seeing a lot of the shift, you mentioned away from consumer. The data center’s now tapping into about 40%. The company’s definitely tapping in to the areas of growth that the market is excited about that are going to continue to scale. They didn’t really mention this specifically, but the company’s a really interesting foothold into 5G. It’s got strength in data center, infrastructure, networking, and in automotive. These are segments that the biggest tech companies in the world want to be a part of.

Marvell has earned a very strong multiple on its earnings because people see it executing. Matt Murphy has done a very good job since he’s come in, his new leadership team, people he’s added, the acquisitions that have been made, whether that’s been Inphi, I mean, obviously Cavium spurned it all, and the company’s continuing to make moves, Pat.

Innovium this quarter, you and I had the chance to talk to Chris Koopmans and other executives from their team about the specifics of that deal, basically broke this story, didn’t we? Seeing that they’re continuing to identify what I like about their strategy is they seem to find these little spaces between, and they really lean into it.

I mean, we have heard a lot from NVIDIA about the DPU, but Marvell was really the company that started breaking this into the market and you know what, NVIDIA just put its super power behind it and watch it go. But this whole idea of being able to break out your networking and storage and give more processing power to the core CPUs to do what they’re best at doing, this is a big deal as we’re trying to scale up the throughput and scale up the ability to support workloads in the growing data ecosystem.

So, that’s what I like about Marvell. The numbers are good, but what I really like about the companies is they’re finding spaces, where their business isn’t under a ton of duress. They’re seeing as a company that really offers value in these white spaces. There’s a lot to like about that because it’s just a situation where growth is going to be there because they are where they’re needed, and they’re side-by-side with some of these big names, not going head-to-head all the time, which is a really good thing.

Good quarter, good quarter, Marvell. Excited to continue to watch the company grow. I think the market has definitely recognized it, but I think there’s still potential.

Patrick Moorhead: Yeah, there is. It’s so sticky, with the two acquisitions they made and they have a lot of IP that you can’t just trade out like you can a CPU. So let’s move on, we’re now The Six Seven podcast.

Patrick Moorhead: Yeah, Six Seven, but hey, let’s go to this final one.