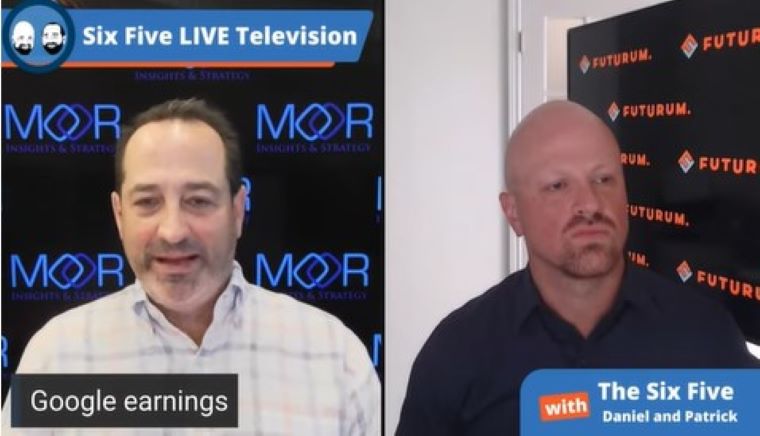 Patrick Moorhead: Yeah, Google. Well, first of all, just to set the narrative and I’ll spend more time on Google Cloud than I will on overall Google. But I think people were really fearful of the big ad collapse after seeing how Snap did, right? And people were super worried. Now Meta came out after Google and they laid a giant egg, but Google’s really the bellwether for this.

And they’re not just ads, they’re a ton of content too. Because when you look at their ads are about 7 billion, Google search is 35 billion business. So overall ads, but they have a lot of properties that make them a little bit richer than just being an ad play. They certainly aren’t a social play, right? In fact, they get harangued for not being very good at that, but I want to focus on Google Cloud a little bit.

So their sales rep, 35%, not great I guess when you look at them as a leader, but a distant third place, right? You would want to see 40, 50% growth. But big growth is big growth. I think it’s good business. I think Google Cloud’s biggest challenge in translating the big deals and the big back leg they have into revenue is customer success, customer success group. And I just don’t think they have enough people to be able to fill those gaps.

There’s a lot of stories of Google signing billion dollar deals and then they’re $50 million in on the revenue. But I have been super impressed with how good they’ve become on the analytics data, AI and ML. And in many ways, and I have talked to a bunch of CIOs across the world, I’m not saying that sarcastically, it’s the truth, who are looking at Google as a potential number one or number two cloud provider for them.

And it takes time, right? Thomas Kurian hasn’t been in the helm long enough, cloud is over 10 years old. And T.K’s the right guy for the job, but he’s only been in for what? Three years. So it is going to take some time, but they are growing. Their loss increased to 267 million, but they increased sales by 1.6 billion. So I don’t think that’s a bad thing. And in the end investors were relieved at the advertising, they were up 3% after hours.

Daniel Newman: Yeah. The media spends a lot of time talking about the advertising business. And so I want to just touch on that really quickly. The numbers were really solid on the advertising side and that’s why the street responded positively. Again, another miss on top and bottom so it still didn’t hit what people expected.

And therefore Google still saw some really strong numbers, again, some deceleration. So maybe that is an indicator that the companies downstream aren’t doing as well in a tougher economy, but I call it the above the fold when it comes to spend, those companies are still putting a disproportionate amount of their dollars to Google when it comes to advertising. By the way, another company’s getting a lot of advertising nowadays is Amazon, interesting enough and we’ll talk about that later. Unsurprisingly should be to many of you.

The cloud numbers, Pat, you really hit on the head. I like what Google Cloud is doing. And by the way, you’ll probably hear from us quite a bit at Google Cloud next this year, the Six Five. Looks like we’ll be there, but they’re doing some things that are really smart. They’re zeroing in on some things, they’ve moved to a homegrown chip architecture where they’re going to work.

They made the partnership and they announced that. That should help them push margin up in the long term, give more optionality to their customers that are looking to lower costs or build more customization or whatever there. We’ve seen that work extremely well for AWS and it’s probably going to work very well for Google in the long run. I also like how they verticalized their cloud business quite a bit. They put a lot of effort into focusing on vertical clouds and they’ve really only just begun to do that.

So my feeling is in the long run, it’s a really, probably difficult move to bet against Google’s future growth. A couple things I think I would’ve liked to see them continue to narrow losses, but when you have the sort of piggy bank in your business that is the advertising business, I think Google can be pretty strategic. They know that the cloud business is still pretty small proportionately and they can spend money.

They’re spending on infrastructure, they’re spending on marketing, they’re spending on expansion because they know from a law of large number standpoint, they have to grow a lot more and a lot faster to start getting the critical mass. So while they didn’t narrow losses this quarter, they did still see 30 plus percent growth and I think that was a good result. So overall a really strong quarter for Alphabet and another company that landed above the fold.

Patrick Moorhead: Let me do a quick boomerang here. I wish they had an earning slide deck. I mean, could their earnings be any more boring and uninformative?

Patrick Moorhead: No, no. Yeah, it’s like a 1960s earnings press release, right? And I was thinking, well, maybe it’s because I don’t watch their call on YouTube, but there’s no visuals on YouTube when they do the video. It’s basically a picture of who’s talking and then that’s about it. And I think it’s important as Google diversifies and wants to get, Google needs to be talking more about Google Cloud in their earnings. And I really wish that they would pay more attention to it.

I mean, to me it’s very noticeable of what the company’s priorities are, is where they spend their time. And I get that okay, a big percentage of their revenue and profit are advertising and media properties like YouTube. But if they’re trying to change the narrative, which is, hey, I’m a company that’s more about that and earnings events have really turned into a more than an investor showing up, I think they need to talk more about it. So a little bit of a rant over. I am super excited for Google Cloud next.