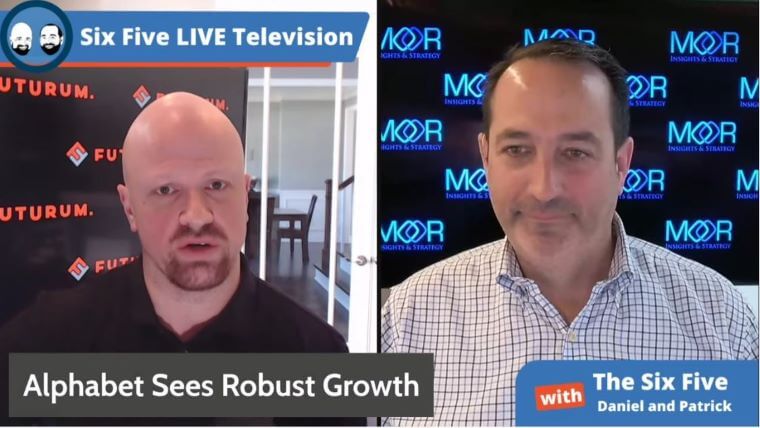 Patrick Moorhead: Let’s move on to our second tech stock and that is Google. Two big businesses there. Actually, one really gigantic business, which are ads, and a tiny business, but getting bigger, Cloud business.

Daniel Newman: Absolutely Pat. I’ll share the limelight with you here. I had the chance to go on and talk to Emily Chang on Bloomberg about this one. After digesting it, I kind of see the ad spend is back. Facebook, later in the week, proved this. But, across the board, companies that are in the ad space are performing very, very well. The earnings were almost $11 above expectation. 26 versus 15.

Daniel Newman: Over 55 billion in revenue. YouTube was up. Traffic acquisition costs were pretty steady. Revenue rose 34%, year over year. But, this is a reopening story. And again, everyone gets excited about those. But, when the pandemic took place, Google, actually, took a fairly significant hit to its ad revenue. Because a lot of people that advertise on places like Facebook and Google are smaller businesses that are spending money to drive traffic to their company sites.

Daniel Newman: Even though Austin used to be my home. But, my point was, the hotel was packed. The airplane was packed. The airport was packed. We’re starting to see the world look and feel like the world. Like the one that we knew pre 2020. We’re not entirely back. There’s still issues. India is a big issue. There’s still issues going on here in the states. We have not gotten everybody vaccinated. We haven’t yet figured out exactly how robust our immunity is. But, we’re starting to see things more normal. And that means more spend in Google. That’s what’s going on in the advertising space, Pat. I’ll make one comment about Cloud and then I’ll let you chime in because I know you work closely with the team over there at Google Cloud. Revenue is up. It’s up substantially. Up over a billion dollars from the same period last year.

But, the losses are still mounting. Over 900 million in losses, but they’re narrowing.

And that’s basically, when it comes to Google Cloud, what I’m looking for. They’re not interested in being number three. They’re interested in competing side by side with Amazon and Azure. They’re going to spend what it takes. They will continue to lose. And when you’re generating $26.29 a share in earnings, even after losing a billion dollars on your Cloud business, you can continue to keep investing.

Patrick Moorhead: Yeah. And that’s why I’d like to focus on, which is their Cloud business, which, for forever, we were wondering, “Hey, how big is this Cloud business?” It was in the other bets before and I was really happy to see them break it out. I think the timing was good because, if I look at how they did, they were up 34% in Cloud. Up 1.3 billion or 1.27 billion. In comparison to AWS, which is sometimes unfair, they were up 3.2 billion. But still, even putting Google Cloud and AWS in the same statement is, I think, impressive. I’m going to come out and state the obvious, which is, that Google is primarily SaaS with some paths and a little bit of IaaS, where AWS is tilted more to IaaS. But, AWS does count their paths in SaaS as well as, as Cloud revenue. I don’t know what Cloud revenue is. My definition is IaaS plus paths plus SaaS. Loss narrowed. Loss can’t be there forever. But, you know what, when you’re cranking out 15 bucks a share, is that what you said?

Patrick Moorhead: $26 a share, you can afford investments and go for losses. Now the loss did narrow substantially, which was nice to see.

Daniel Newman: I think everybody wonders that question and that’s what we need to watch is, how long will Google, Alphabet sustain losses in this Cloud business in order to catch up and grow. And I actually think it’ll be a while. I could see at least four to eight more quarters, which is significant, of taking losses because I think they’ll invest in people. They’ll invest in data centers. They’re going to invest in winning business at every opportunity. Because like I said, I just don’t see Google being interested or Alphabet being interested in being number three in anything. Which by the way, I love. We always say this on the show. Spurring innovation. Spurring competition. Good stuff.

Patrick Moorhead: The market, typically, comes in threes. I know a lot of that’s based on how you characterize the business. But, a good markets have three very large players. And that’s how that’s how markets typically end up.