Good News for T-Mobile in the Earnings Department 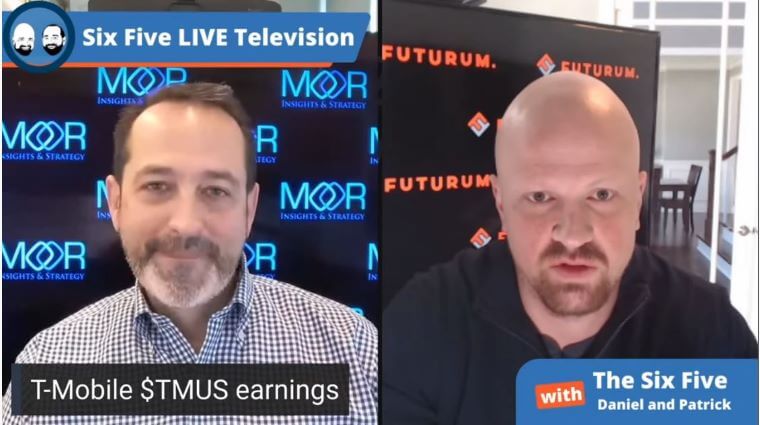 Daniel Newman: You know my favorite thing to talk about on this show are always the earnings. I love making those ties from earnings to strategy. We do that different, and we think we do it maybe better than most. The thing is earnings are the moment of truth as you always like to say. It’s the most honest a company will ever be about how well its strategy is working out. This week, not nearly as many earnings as last week, but there were a few, and T-Mobile had a very, very good result.

Patrick Moorhead: Yeah, I think the way to characterize is, is T-Mobile tired of winning so much? If you look at the US market, you have AT & T, Verizon, and T-Mobile and others. If you look at Verizon’s strategy, it’s content, and they just realized that buying aged content is not the way to go, and they’re selling that off. You had AT & T who got into everything from HBO, to Disney, to ESPN, and investors don’t like that. Then you have T-Mobile, sticking to their swim lane and just absolutely crushing it. In Q1 what really stuck out for me were the net adds. In this business it’s net adds, 1.4 million. That means they took 1.4 million post-paid away from AT & T and Verizon, and it just continues. Net income. Was almost a billion dollars a quarter. A billion dollars a quarter. One of the reasons I like this story so much, is T-Mobile got no respect about five years, none. The only company that got less respect, was Sprint. And they combined, and a lot of people were like, “Oh, two has-beens combining.” But now they’re kicking AT & T and Verizon’s butt, particularly on consumer side, playing the uncarrier. And it just keeps moving on.

If you look on a 5G basis, basically giving away free 5G phones, and getting that mid-band 5G has been the magic over and above their competitors C-band which isn’t even there yet. And these weak millimeter wave, my gosh, we don’t even have millimeter wave in Austin yet. Austin, Texas with a T-E-C-H. So again, I hate to be blathering on and on here, but is T-Mobile tired of winning yet? Apparently not.

Daniel Newman: Listen, if Texas, my soon to be home could actually do a little work on getting a few more towers up, that would be great. I have less than impressive cell coverage. It’s kind of like when you go to Barcelona, for Bubble World, and you’re supposed to be in one of the tech hubs of the world, and the wi-fi is 2MB up and down.

Patrick Moorhead: Now Austin is an AT & T city when it comes to towers.

Daniel Newman: But T-Mobile needs to figure out a way to draft off that. We know these companies are pretty creative and clever at using and sharing the bandwidth to make sure that… They charge each other. That’s how it’s always been. But Pat, listen, you hit it on the head. The T-Mobile run, over the last five years has really been insane to watch. This company was an afterthought, it was like, “Oh, you can’t afford Verizon? You can’t afford AT & T? Oh sure, you can go with T-Mobile.” I just want to raise my hand and say I’ve been using T-Mobile now for six years here in Chicago. I believed in it, I really loved the no penalty, and the fact that the company had the ambition to start paying people to switch. Why did I love that so much? Well look, in this business this is a recurring revenue stream. Selling the phones, not a big deal. It’s that every single month, that four, or five, or six iPhones, or smart devices in the household, all at $100 or more per person, in perpetuity. Then these companies are adding services, On Demand, they’re adding in-app purchasing, they’re adding different media services to up level the businesses. Of course Verizon actually just spun off most of its media, worth pointing out.

It’s just a really, really smart business. It’s been an interesting transition with the new CEO coming in, because it was such an over the top, on fire kind of brand. Now it seems to be humbling into a little bit more of a we are the leader now, and acting a little bit differently. But man when the company was a disruptor, it was fun to watch it just take market share quarter after quarter.

Patrick Moorhead: Well Daniel, that’s a great observation on it. When you have CEO’s, they’re different personalities, but T-Mobile is very much aggressive guy, he’s not wearing hats during earnings calls yet. But he’s still pretty much orange and upbeat. I think they have to do that to get into the commercial side of the business. T-Mobile launched some really exciting enterprise and commercial services and capabilities, that oh by the way, I’m going to try out. T-Mobile is sending me a 5G hotspot that I’m going to park right outside my window, and that’s very much aligned with all of the CIO conversations that I’m having, and I’m sure you’re having Daniel.