GlobalFoundries Rebrands at the Right Time 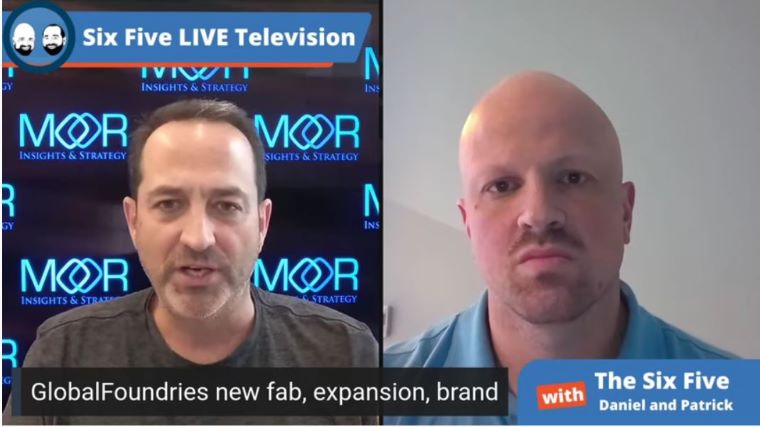 The Six Five team does a deep dive into the latest news regarding GlobalFoundries.

Daniel Newman: Interesting news broke last week. It was all about Intel potentially buying GlobalFoundries. This week though, GlobalFoundries, actually on its own without any reference to what’s going on at Intel, made some big announcements about some expansion of its fabs and did a big rebranding.

Patrick Moorhead: Yeah. If you’re not familiar with GlobalFoundries, you should be because they are a force in the foundry marketplace for semi-conductors and they do it in the area that Intel doesn’t do it in, namely, they do it for 5G RF, IOT automotive, and focus on silicon photonics. The reason that those are the focus areas is because those require special types of technologies that go into it, different types of materials that go into it, as opposed to bleeding-edge geometry improvements that gets you to the lowest nanometer node like three, five or seven. And unbeknownst to most people, our biggest issue with being able to ship more products out the door isn’t leading edge, it’s more lagging edge. It’s USB controllers, it’s security chips that go into devices. It’s chips that go into displays as we’ve moved from desktop to going more mobile.

So with that basis here, GlobalFoundries, who is planning on going IPO in the next 18 months, there was a rumor about Intel buying them. I totally get it for Intel. Regulatory-wise, it would never happen. It would just never happen. But what they did announce is they made three announcements, and this was broadcasting from their Malta establishment in New York. Good old Chuck Schumer was there to lend support, but announcement number one was they were going to expand the current Malta facility by $1 billion of investment. Essentially, it’s putting equipment in there. They already have a shell there in Fab 8. This is dumping equipment in.

The second announcement was a brand new fab, and they didn’t give the number of wafers, they didn’t give the investment because quite frankly, they’re still getting the investment, and it totally makes sense. But what they did talk about is that it would provide, let me see, 1,000 new jobs, and I did think that that was a pretty cool. If I back into that, please don’t hold me into that, I think we’re looking probably at a four to $5 billion brand new fab, very similar to what they ponied up for in Singapore. So that was announcement number two, it is a huge one. They had the secretary of commerce there on hand as well.

The final was a brand revamp, not a complete thing, but if you remember, GlobalFoundries was all cap, it’s like, “GLOBALFOUNDRIES,” like it’s screaming at you. The new one is a big G, Global, big F Foundries, and some iconography that looks suspiciously like a wafer behind it with maybe a G or an F. My expectation is that ultimately, they’re going to get rid of GlobalFoundries and just go with GF. That’s where I think that this has headed. Net net, I think it’s going to go to GF ultimately, and we can get on with… A lot of people asked me, “Why didn’t they just change the complete name? I hate the word global.” Well, you know what? Global foundry is more important now than ever. See, GlobalFoundries can be happy with the West and they can be happy, or they can be friends with China because they have the most diversified foundry establishments across the world, Singapore, Germany, United States, and even more. Okay, there we’re at.

Daniel Newman: That wasn’t boring. That is the by-product of sleeping about four hours a night for the last eight days while I’ve been in the process of relocating my entire life and still podding, because I never want to miss the opportunity to talk to our great community. So bear with me folks. Look, I’m not going to add much there because Pat, you had a lot to say, we talked extensively about GlobalFoundries when we talked about the Intel deal. You’re right. Probably not much of a possibility, although I could see how Intel would love to see that deal happen so that they can then put pressure on regulators to not allow a different deal that’s going on out there to happen concurrently.

Now, last thought on GlobalFoundries as a whole is Intel had some remarks about the chip shortage being its most acute here in the second half of 2021 as part of its earnings today. To me, that just means there’s a multi-year opportunity on the lagging and leading edge to create and to fulfill those gaps in production in the marketplace and GlobalFoundries is very well positioned. That’s probably another reason why an IPO would be very friendly because of all of the attention right now that the market is getting for a cause that can actually produce volumes of chips to fill all of the supply chain woes.