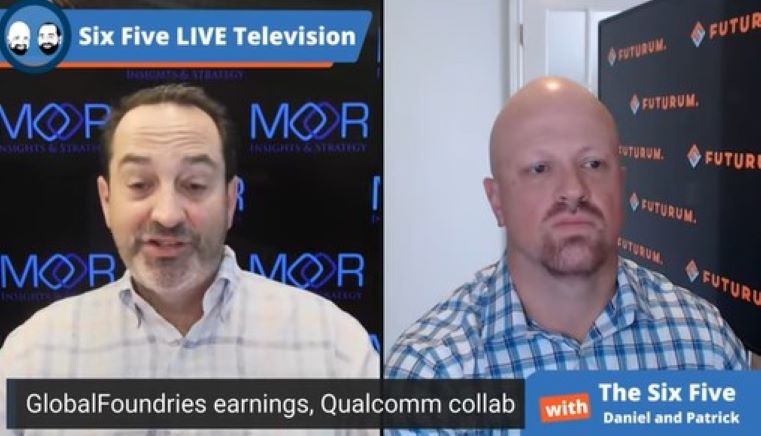 Daniel Newman: GlobalFoundries, big week, some earnings, pretty good results. And also a new collaboration announced, which is like the second in two weeks if I’m not mistaken.

Patrick Moorhead: Man, GlobalFoundries is definitely on the rise. And it’s hard for me to turn on a CNBC or a Bloomberg without seeing CEO, Tom Caulfield, talking up the CHIPS Act and between him and Pat Gelsinger, I think the two of them, and I’ll put Arvind Krishna from IBM in there, probably did more to get the CHIPS Act moving and across the line. But if you’re not familiar with GlobalFoundries, they are a large specialty fab. They have operations that a Foundry, they have operations globally, hence the word GlobalFoundries. And they do incredible amount of analog technology. They’re using special types of materials and methods for things like photonics and networking.

They were in this bundle of companies that along with folks like even TI, when it came down to the supply chain crunch and the challenges of delivering as many, let’s say cars as people wanted. And then we’ve seen a lot of people have direct relationships with GlobalFoundries all the way to car makers and they just inked a big deal with Qualcomm that’s up the food chain, at least one notch. They added $4 billion to their wafer agreement. And that brings the total deal with Qualcomm for $7 billion. They didn’t talk exactly what it was about, but I think it’s RF quite frankly.

Patrick Moorhead: Yeah. Yeah. And it’s not that in fact GlobalFoundries does actually do SOCs, but I am just, I think this is more than likely RF and they’re growing RF business, but Hey, let’s jump into earnings. How did they do? I mean, they pretty much broke records everywhere. They had record revenue, they had record gross margin, record operating income, record net income. They had a big beat on the bottom, 28% growth and a small 1% revenue beat. The biggest drivers were coms in infrastructure. And that was a 50% growth, IOT at 72% growth, automotive at 34%. And coming in the rear smartphone, which by the way, is very typical this quarter of growth of 14%. It’s funny, no need to cry about a double digit growth. But if the previous year and a half we had more like 20X percent growth in there.

And one blip on the radar was PC. As you may be aware, GlobalFoundries used to do the interconnect of AMD’s distributed architecture processors, the two and a half D technology. That was off 34%. And that’s really an unwinding of AMD, but really net net, exactly as you would expect a stellar result. And by the way, doing this at the same time that they’re putting all this effort into CHIPS Act, dealing with all of this supply chain challenges where quite frankly, they’re the solution.

Daniel Newman: Yeah. And the timing is great. With the company newly IPO, starting to show some record results is never a bad thing. We of course have hit this sort of demarcation in the chip market, where there are certain companies that are really robust, that will probably persevere through some of the slowing in parts of the market. And then there’s going to be other chip makers that are going to have some challenges ahead, especially those with a lot of exposure to sort of low end consumer, PC. You saw that in these numbers, but we’ve really seen that. I published a piece on MarketWatch yesterday that was kind of what did we learn from this quarter semiconductor results, Pat? And I mean, the long and short is we learned A, companies with more exposure to enterprise cloud and data center and those types of applications are showing a lot more resiliency. Companies that have more exposure to the consumer are showing weakness. Companies that have exposure to both are seemingly doing well on the first and poorly or less well on the latter.

And of course, there’s a, I’ve said this a few times over the last few weeks, there’s the components of beta and alpha. Some companies that are executing very well are doing better across the board. AMD did pretty well across the board, but you still saw a slowing in PC. Lattice Semiconductor did well across the board, but their consumer parts still struggled more than others. For GlobalFoundries, this was a really good result. It was a slow growth on overall revenue in terms of expectation 1%, but a beat is a beat right now. And when the market is tepid, beats are good in any capacity, record revenues, record opting, record net income, growth. And by the way, smartphone growth has been interesting as we’ve seen PC fall, because it appears that the demand for smartphones is much more resilient than the demand for PC. I think people cycle through them more rapidly. I think, there’s probably a lot of cases, but if you just look at Qualcomm’s earnings and TSMs earnings versus Intel, there was a pretty clear demarcation that not all consumer is created equal.

Daniel Newman: And we’ll talk a little bit later on about some of the warnings that are coming out of this quarter, because we’re also seeing the impact of crypto on certain types. Everybody thinks about GPUs and gaming. I know I’m not just talking about GFS, but you really hit the macros. But on the macro and secular level, enterprises are still spending, inflationary tech in the data center. Companies are deploying applications and looking for getting more value out of their tech investments. It might slow a little bit. I like to use Pat the cloud numbers that we saw, all of which Google, Azure, and AWS all grew very healthily, but slower than their previous quarters. And I said, this is a quarter of normalization. Meaning for enterprise I see that as normalization, which might be 10 or 20% down from the peak growth rates, which means if you’re growing 40, maybe you’re growing 35 or 30, but for PC, it’s almost like it fell off a cliff.

It went from like double digit growth to double digit contraction. The only other thing to watch is going to be backlogs from all these companies. Backlogs, are they starting to wind down? Are they starting to grow? But if you look at GlobalFoundries, it appears the execution is in place. I’m going to say one other thing. Importance of these older processes are massively understated. We’ve spent so much time on the CHIPS Act talking all about 10 nanometer, seven nanometer, five nanometer. And of course we want to build resilience here in the US. GlobalFoundries is the penultimate example of a company that’s not focused on that particular process, but incredibly necessary, whether it’s in your smartphone or your automobile, those 18 and 30 and larger processes are going to be critical for a long time. We need to build resiliency across the board. That’s what they’re doing. So good job GlobalFoundries.