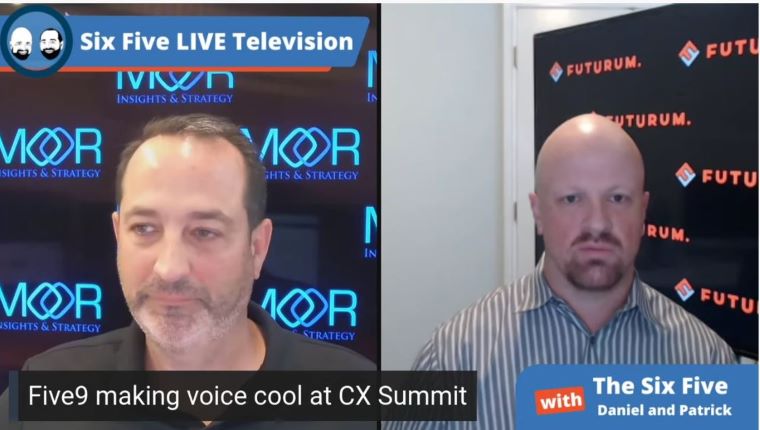 Daniel Newman: All right, let’s jump into the second topic about Five9. So Five9, I’m just going to say all the names wrong today. Five9, probably most recently made it to big headlines because it was acquired for $14.7 billion via Zoom. And we’ll talk more about Zoom a little bit here and later in the show, but had its big CX Summit event that you and I attended, got to listen to CEO, Rowan Trollope and the executive team talk. Company is in the process of really trying to show the market that voice is still cool.

So while you and I here, by the way, follows the theme of Callin, follows a theme of podcasting, you and I like to do video, we like to add and multicast and give people what they want in whatever channel they want. But in reality, when we really need service, so you’re thinking about the context center world, where Five9 plays in the cloud, it really is all about being able to quickly deliver resolutions to people’s challenges.

Whether that’s you’re calling in to figure out where your missing orders are, you’re calling in to figure out how to get support on a product or service. In most cases, we don’t want to jump on video, it’s still fairly archaic kind of interaction, maybe because of the pandemic are more open than in the past to letting people look in our family rooms, living rooms and kitchens, but at the same time, we just want resolution.

We want to know, where’s that order, when’s it going to get here? How do I get this fixed? How do I get this up and running? And Five9 is really working on building the technology, the platform, the automation to utilize voice and to still enable people and companies to get to that resolution more quickly in a more streamlined manner. That was really the theme I took away here from the Five9 Summit is you can do it using modernization like cloud, you can do it at scale, but you can do it using the kind of communications and technologies that most of the market wants and that’s fast. And I actually, Pat, while this is a fairly quick and simple topic for us to get on and get past here on the show is that I actually think it’s going to be a voice only, it’s going to then evolve to, and we’re already seeing this, voice and chat meaning people would prefer if they can’t get voice they prefer to chat.

And those two are going to become increasingly interchangeable depending on the demographic of who’s looking for support. People are going to want to lead with chat or lead with voice. And video well, I do see continued integrations into CX platforms to enable a quick launch of a video, to help someone with something more technical or something that needs to be viewed. I actually think that’s going to be the third choice and it’s going to be more specialized. So it’s interesting what’s going on here because Five9 is really pushing its roots, pushing the ability to get quick resolution through a voice platform. But at the same time with the Zoom acquisition out there, you do have to think there’s going to be much bigger integrations, especially with Zoom making such a big bet in how it’s going to make it’s platform more extensible, more horizontal, and of course, compete with Slack Force, Salesforce and Slack. And then of course, Microsoft Teams and all that is being built from that platform.

Patrick Moorhead: Yeah, that’s good analysis, Daniel. And this might sound like heresy, but to be honest with you, I think that there’s more you can do with machine learning and audio than you can with video. I mean, imagine if we went on mute and Zoom or a company had to just something with video, what are they going to do? Read our lips or something like that? I mean, maybe, maybe that would improve cognition or something like that. So if you look at the value, I think there’s actually more value in the context of a call center with audio than there is video. The second thing that really came out of the show was automation, which says, okay, you get all of this intelligence out of massaging the voice data now, what do you do? You want automatic call changes, you want automatically information to come up, you want automatic stuff to happen through these cues and automation is the way to do that.

And low-code, no-code type of things are really the way to go as opposed to diving in and editing a hundred thousand lines of code, that’s just ugly and there aren’t enough programmers to do that. So I’ll be honest until I started to do, I’ve done some analysis on some other companies like 8×8 and folks like that and recently Mitel, I think Five9 has got some really interesting stuff and I mean, it’s crystal clear what Zoom is going to do with them. Zoom really didn’t have a contact center offering and now they do. Zoom was super focused on what you could do with video, not really the AI portion, they weren’t doing any tricks with video and this brings an AI capability to their portfolio and of course it brings ruin.

Daniel Newman: Yeah. That’s great. We can spend a little bit more time talking about all the converging forces of collaboration and contact center, CDP, CRM platform is evolving and there is a very interesting set of developments that are creating new landscapes of competition.