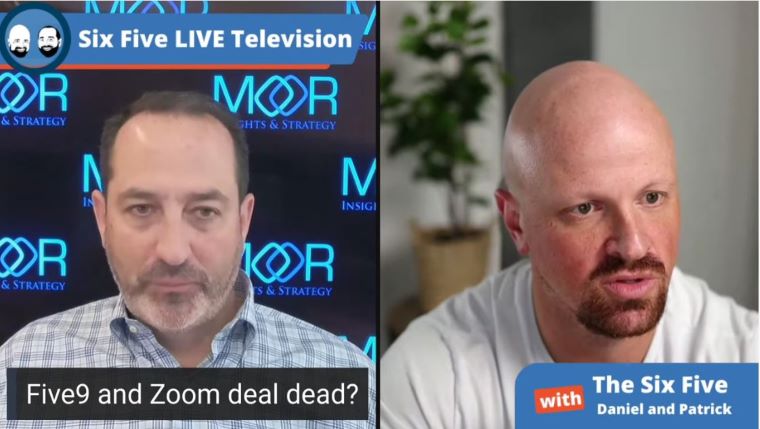 The Six Five team explores the Five9 and Zoom deal.

Daniel Newman: Let’s wrap up with a little bit of news. I don’t want to say it’s good news, I don’t want to say it’s bad news, but let’s just say it’s something we haven’t heard a lot lately is a deal goes off the rail when ISS, Institutional Shareholder Services, came out and basically issued a report to Five9 investors that the $14.7 billion that put about a 12% premium on the Five9 stock at the time of the deal should not be completed.

A lot of people, including us, Pat, operated under the expectation that regulatory was not going to stop this deal because there was no good reason for that. Even some of the investigations into China and their relationships were not thought to have stopped this deal, but what I didn’t expect was that this deal would get stopped because of an external advisor coming out and telling Five9 shareholders not to vote, and then the voters actually didn’t vote for it.

Now, the backdrop on this is I think there was something like a 25% price drop in the Zoom stock, and this was an all-stock deal that took place from the time the deal got announced to the time that the deal was supposed to be moving forward. This was on the back of the fact that Zoom’s growth had fallen to a terrible 54% year over year on a pandemic over pandemic quarter. If you hear my sarcasm, that’s because I’m laying it on pretty thick. The growth rate for Zoom is fine.

Bottom line, here, Pat, and because we’re a little bit at time and you and I both have to wrap this show up here pretty quick, and I think this is a topic that warrants a little more conversation than we’re going to be able to give it right now, is that both of these companies will be fine by themselves because Five9 has a very successful product in a growing category. Zoom has a successful product and a platform in a category where they’ve been very successful.

I do believe together they created a larger TAM and it did make a compelling case for Zoom’s platform and horizontal growth into new areas like the contact center. There’s still a strategic partnership between the two companies. The market will still get a benefit from that partnership, but going forward, I think both companies are going to be okay. I think both companies are going to continue to grow. I’m not a hundred percent this is the end of this deal forever, but it does look like right now there’s not going to be another offer tabled in the immediate future.

Patrick Moorhead: Daniel, I mean, you said it best. I like the combination. It was strategically sound. Note in none of the communications from Five9 did they dispel the strategy. We’re talking about price right now. That’s what this comes down to. I don’t think this deal is dead, Daniel, I don’t. Now, on one side, I know that Zoom has very build-it-yourself type of mentality, but I have to tell you, getting call center customers, I think they can build a decent technology. Zoom hasn’t proven to me that on the audio side it has the machine learning chops and automation to be able to build their own and just show up and be successful on day one. I don’t think this deal is dead because it’s not price. I think we’re looking at a very hard negotiation at this point, so anyways…

Daniel Newman: Something to keep an eye on.