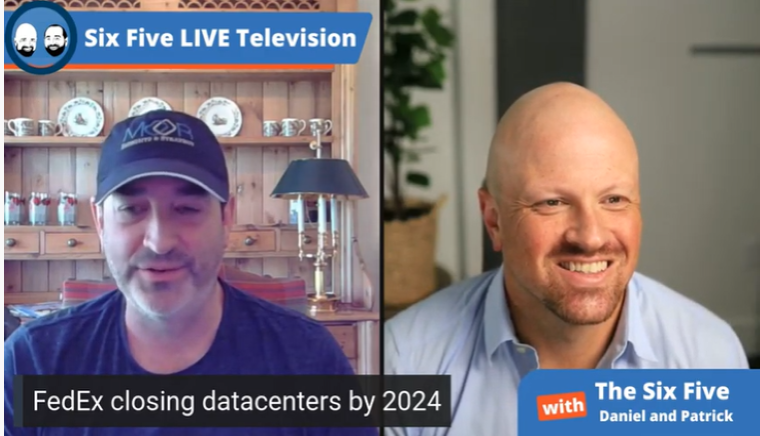 The Six Five team discusses how Fedex is set to close datacenters.

Patrick Moorhead: And this is the big headline. Well, it’s funny, the big headline was FedEx moving away from mainframes by 2024. The full reality is they’re getting out of data centers by 2024. Reportedly their CIO said, hey, we’re out, we’re moving to a cloud model. This has been a decade transition. I was amused though, with the headline, many people took it as getting out of mainframes. But here’s the thing. They’re getting out of XCD 6 servers in the big data center. I don’t have the schematics of their next generation plans, but I highly doubt that they’re moving everything into the cloud. So it’s probably a little bit of a misnomer if you count Edge data center. Great headline grabber.

And by the way, it is not easy to move anything off of a mainframe and have the same degree of security and resiliency. So my guess is they moved from a 9 nines to something that was a lot lower. And they had to re architect pretty much all their applications to be able to do this, because quite frankly, as we’ve both written, the mainframe is really good. The reason that the mainframe has been around for so long, I guess, going on 70 years, is because there are things that it just does so well. And the reason that most credit card transactions are still run on mainframes, it’s very highly secure, and it’s a throughput engine, and it keeps getting better. Gosh, in this last round of mainframes, heck, there’s even machine learning inference with discrete accelerators on the Z16. So I don’t think that most companies are headed in this direction. They have, quite frankly, a more mature view of it, which is hybrid, as opposed to we’re closing all of their data centers, but I’m really interested to see how this works out for them.

Daniel Newman: I’m pulling up FedEx’s ticker. So the company, $60 billion market cap company. I’m just trying to get a revenue range here. And the reason I’m looking at this is I’m going, $400 million is a lot of money, but the question is going to be about risk reward. I feel like there’s a gotcha here, because, Pat, we’ve watched the A16Z cloud repatriation discussions go on. We talk about cloud as an operating model. And for certain types of workloads, certain applications cloud definitely is going to be the best, and it will be pervasive. Certain other types of workload we’re seeing a very strong indicator that hybrid, which means basically it’s hybrid because you’re going to leave some of your workloads on prem is also going to continue to be meaningful. I guess the question mark is kind of like-

Patrick Moorhead: This is a headline we would’ve expected five years ago, before everybody realized that the Edge and the hybrid cloud made sense. It’s weird.

Daniel Newman: Well, I mean, what I’m looking at is, in the February quarter FedEx did 23.6 billion in revenue. So $400 million, what I’m saying is, okay, maybe this is big. Very small percentage against revenue, they have a 1.11 billion net income in that quarter. But if it doesn’t work well that number’s going to look like a less successful project. And all I’m saying is that I am a believer in cloud. I’m a believer in public cloud, and I’m a believer that public cloud, in partnership with certain Edge, and On-Prem is going to work extraordinarily well. I’m also, you and I have also been publicly on the record as believers in mainframe technology. Not the old one floor per computer mainframe technology. I’m talking about the modernized mainframes that, you mentioned IBM Z, that have been built with accelerators, with redundancy, resiliency, scalability, transaction processing, to handle massive transactions and do it all securely.

Can this all be done? Like I said, we both are bullish on Azure. We’re bullish on Oracle. We think they’re doing things well. It’s not a suggestion of that. It’s just an interesting sort of very abrupt transition that, I wonder if it’ll become a really good case study, and can a company of FedEx’s size and scale make a massive lift and shift to the public cloud and, or are they also leaning heavy on Azure stack