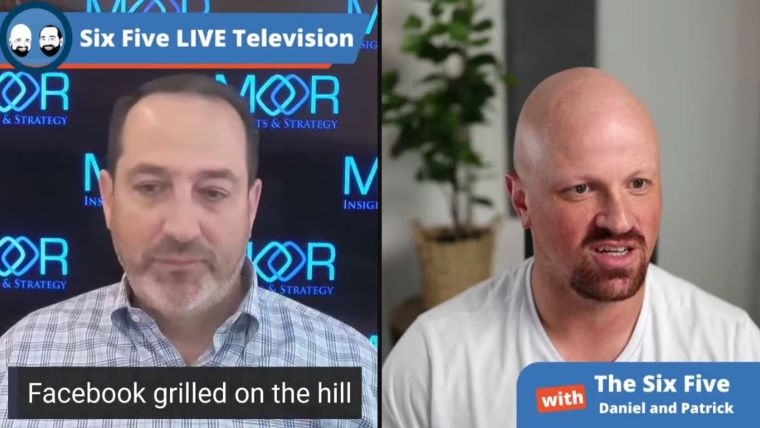 The Six Five team gives their analysis on Facebook being grilled by Congress.

Daniel Newman: Let’s talk about Facebook being grilled on The Hill. This one is-

Daniel Newman: … one that we can talk about somewhat quickly, but also I’m just going to throw it out there, Pat. The Wall Street Journal a week or two ago, I don’t have the exact day, came out with a report that basically said that Instagram, to a significant percentage of teenage girls, was causing serious ire, it was causing distress, it was causing depression and anxiety, and in some cases in England and the U.S., it actually created an increased risk of suicide or thoughts of suicide.

Now, this was research that was done by Facebook about their Instagram platform that was leaked in The Wall Street Journal and the story came out and effectively has caused a lot of turmoil, a lot of publicity, a lot of media. This, Pat, by the way, is an example that I consider regulation on big tech to be a real discussion and conversation that needed to be had. Now, once again, I believe Zuckerberg and Sheryl Sandberg are not going on the stand and they sent all of their representatives to be part of this discussion. That continues to bother me that the people that are the most accountable for this aren’t fully stepping up and actually being the ones testifying.

The research itself is damning. It’s as damning as it comes, and we’re at this really interesting inflection in society right now where social media is almost needing to be scrutinized the way cigarettes were scrutinized 20 or 30 years before we finally discovered just how bad they were. I’m not saying for a moment that adults with fully developed brains can’t make decisions for themselves the way we choose to drink, smoke, or engage in other behaviors that we know have health risks. The challenge is that these children are being engaged at an earlier and earlier age into these devices, into these social platforms where their view of what the world is, of what health is, of what politics are, of what gainful employment, family looks like are being shaped by algorithms that are out of their control and is basically dictating without them having the ability to discern what is real, what is not.

The data that was discovered by Facebook shows that there’s some problems with this. I, Pat, will just say this, is this is a great example of where if big tech regulation is going to progress, this is an area I’d like to see it progress is finding very specific areas and identifiers where technologies are creating risks, are creating real monopolies, are creating true harm to consumers. Not looking at big, overarching regulatory activities that are going to look at every platform equally. Facebook has a problem. It has a problem with elections. It’s had a problem with its use of data. It’s had a problem with what it’s telling people about how it operates and why it operates. Does Facebook need to be broken up? Probably not. It would cause more consumer harm than benefit, but does Facebook need to start being held much more accountable for things it can improve and do better? This is a case, Pat, where I hope this grilling makes some sausage.

Patrick Moorhead: Ooh, quotable there. I’m going to play the contrarian here, even though I believe that Facebook is toxic for kids. Okay, I think it’s toxic for adults. It also brings a lot of benefits. Imagine COVID where we couldn’t see pictures of grandkids and parents. I haven’t seen my Dad since COVID came out. He’s old and the only way I can see him is through video calls and stuff he posts on Facebook. If we ban Facebook for kids, shouldn’t we… The biggest killer for kids is obesity. Shouldn’t we force kids to be eating right? Maybe not let them eat at McDonald’s? Or keep them from ordering cheeseburgers? How far do we go? If we’re really saying we’re doing this to protect kids, and I know your argument was bigger than that, but let’s just go after everything while we can.

I think in a sense the pile-on on Facebook is, while I think it’s deserved, I also think it’s convenient to bring the kid thing up. The funny part is, both Democrats and Republicans hate Facebook. The Democrats say-

Daniel Newman: It’s not part of them.

Patrick Moorhead: … if Facebook helped elect Trump and the conservatives hate Facebook because they say they get censored more than Democrats, so it’s like this… I don’t know, Daniel. I think we’re both small government people. I don’t want to speak for you. Most of the growth that we’ve seen in business comes from more deregulation, but how could I support kids being injured? I can’t. Anyways, those are my kind of two cents on that. You know, we need to have more conversations on The Six Five like this. This is fun.

Daniel Newman: Yeah, it is a fun one and it’s nice when there’s a little gap in the week and we can pick something big picture. By the way, there were some great segments on our favorite pod, The All In. They talked about it this week and it as a great debate. We could put a link to it maybe in the show notes if we remember.