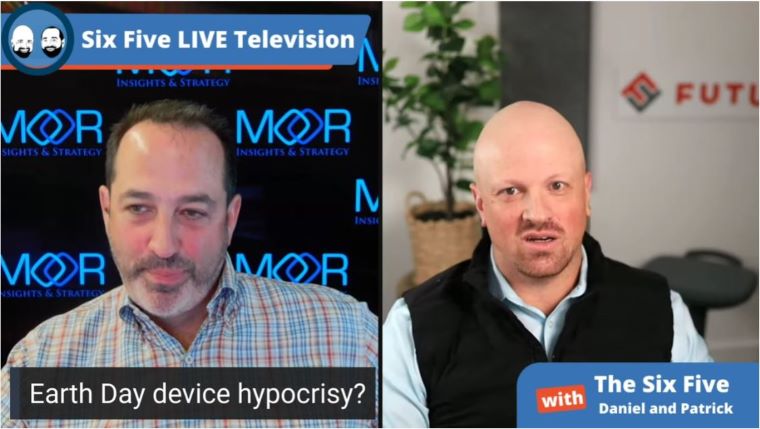 Daniel Newman: Let’s talk about that. You went on a little bit of a Tweet storm. You were doing your thing, as I like to say. You made some calls, because obviously earth day was a day to celebrate all the great efforts that companies are making, but at the same time, as I just did, it’s also a time to reflect and say great for posturing, but what’s really happening here? Your tweets created a bit of a storm. So talk about that.

Patrick Moorhead: I’ve always been kind of a scab picker when it comes to, and playing the opposite side of the room. First off, I just want to say that I am a firm believer. We should be doing more to use less resources. We should also be consuming less as well. But when I see hypocrisy out there, I have to call it. I think I really feel like it’s one of the as analysts we have to do. I picked the scab and listen, I don’t come from, this is not coming from something I read in a book. I worked for device manufacturers for 20 years. I’m very close to this, but when some of these tech companies proclaim sustainably is their number one priority, I have to ask that question.

On the device side, there has not been a device with a modular design that, and this is my hypothesis, that wouldn’t need to be thrown away in a dump every two years You would essentially take different pieces of what you wanted to upgrade. Let’s say it’s a smartphone, it’s a camera, or a processor module, or an upgrade on a display, and the same thing goes for notebooks and for smart speakers. I just think this is hypocrisy in the industry. Now economically modular designs, more expensive they’re thicker, consumers see them as more complex, many times less rugged because the interfaces, the connectivity and it’s hard for these manufacturers to put a commitment on an upgrade roadmap, like let’s say a decade or something like that.

Net consumers are saying through their actions by the chronic upgrades that they actually don’t think that sustainability in the environment is number one. Otherwise they would be like, I’m not upgrading. I’m going to use this smartphone for five to six years, regardless of the awful performance that I could get out of that. Here’s the dirty little secret with CIOs. When I talk to them, I’ll always ask them, “Hey, are you willing to pay more for something that pollutes less?” Daniel 99 out of a 100, when I talk to a hundred CIOs every week… that’s an inside joke everybody. I don’t really do that, but I probably talk to 100 CIOs per year. Anyways, they say they won’t pay extra for something that’s green. If consumers aren’t voting with their wallets and enterprise IT is not voting with their wallets, do they actually care about sustainability?

Then another way I wanted to look at this, well, maybe the industry just hasn’t done enough here. Well guess what? In 1998, I was on the board of the device bay consortium. It was Compaq computer. We were number one in everything. That’s who I worked for. It was Microsoft and it was Intel. We were going to put together a modular architecture for floppy, hard drive, optical, and even processor and memory modules. You know what? It fizzled away. People weren’t interested. It was too expensive.

It’s funny, it’s so old I can’t even find it on the internet when I do a web search. There was Google’s project Aura that was a modular architecture for smartphones. It’s dead. There is a notebook company called Framework, and interestingly enough, they don’t talk about the environment and long term upgrades. It’s all about having a DIY notebook and something that is easier to maintain. Listen, I can back into that and say, okay, that’s good for the environment, but it’s not necessarily there. So anyways, Daniel, there we go. I think as an industry, at least for devices, I mean, look at Apple. They had this robot called Daisy that I saw in town that would, you put a smartphone in and it disassembles stuff. Whatever happened to Daisy? How many smartphones have been recycled? How any iPhones have been taken to third world countries from North America that we thought sucked that got moved out? Where’s operating system support for a decade? It’s not there. Anyways, rant is over.

Daniel Newman: Is that like a slash rant, end rant thing goes there? Should we put that in the show notes? End rant, 22 minute, 23 minutes, 25 seconds? Not a lot to add here. I guess I’d say there are some companies like HPE financial services working on the circular economy that is doing some things in the enterprise space to take servers and computers and laptops and hardwares and get them recycled. I think that stuff’s interesting. I think that’s an opportunity that’s going to grow, because a lot of the notebooks, Pat, to your point that we do get rid of notebooks, phones are perfectly still usable. They’re not no longer functioning and capable of running a current operating system or the apps that people need, but we literally throw these things in the garbage. We just toss them out. No longer good enough for us.

I do think it’s interesting because we spend a lot of time on our iPhones or our new Samsung devices, yelling at people and getting angry on social media about what other people and companies should be doing to give back to the earth. But this kind of goes on to just be what I would call a symptom of society, of today’s society, Pat. That’s that everybody wants things to be done, but they don’t want to do it themselves. They want climate change to be a focus, but not my phone, not my laptop, not my… I need a new flat screen TV every year. I want to replace the car. I mean, heck even Tesla. What are we going to do with those batteries? Okay, because I’m pretty sure-

Patrick Moorhead: By the way, where does most electricity come from? It’s from burning coal globally.

Daniel Newman: I’m pretty sure though, that the toxicity of that lithium and those batteries is probably worse than some of the toxicity of the carbon that is output from our vehicles today. But again, no one wants to talk about that. So let’s not talk about it, Pat. Let’s just talk about something else, because I don’t want to offend anybody by actually at least making them think beyond. You know me, I play it safe.

Daniel Newman: I don’t think this was that risky. That other thing you said, inside joke.

Patrick Moorhead: No. No. Okay. I got you. I got you. No, no. I think we do need to pick these scabs. Otherwise we will never actually get to what I think we really want to do. Listen, I’m a big do say guy. If you say you’re going to do something, do it, and don’t pander.