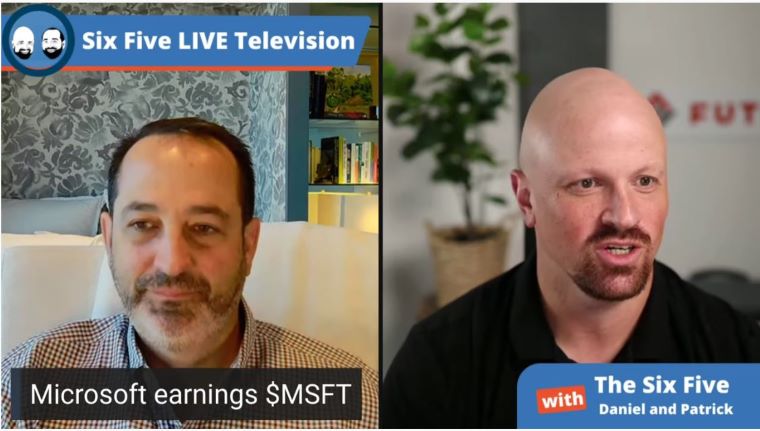 The Six Five team discusses the latest earnings report out of Microsoft.

Daniel Newman: Microsoft. I don’t even know what to say, Pat. My bullish sentiment here could not be more validated by this particular quarter’s result. Satya Nadella is absolutely crushing it at every corner, getting everything right. I’ve got one, maybe hiccup, caveat, question mark in their entire business right now, 22% year-on-year. This quarter, everybody sort of felt that with inflation, with supply chain, with labor shortages, with a return to normal that these earnings were going to not be as good. Microsoft is diversified as it is, it’s got a mix of enterprise and consumer, it’s got Cloud. It is unfazed, biggest growth in three years after last quarter’s biggest growth in three years, 22% on the top line. It beat on earnings it’s Azure business, again, over 50%. I keep saying 50%, eventually it’s going to have to fall. It had a momentary blip where it dipped into the mid 40s and then the last two quarters back over 50%. Azure is on fire.

Then, you’ve got the Productivity business, Pat, you got Office, LinkedIn is growing at a breakneck pace. By the way, kind of an unsung hero of Microsoft is that LinkedIn and that gold mine of data that they have acquired. Everyone forgets that Microsoft is a social company. You’ve got the social developer community in GitHub, you’ve got the social business community in LinkedIn. Sure, they don’t have an outrage platform for political discourse, but in terms of actual meaningful mined data for enterprise, Microsoft is an absolute rockstar right now. Across its different segments, it had growth. It was green in every area except for, I believe, in the last quarter in the Windows OEM and Xbox content had a slight decline. The Xbox stuff was maybe a little more surprising, but supply chain’s holding it down a little bit. Windows OEM is supply constraints, that was actually going to do it. But you had areas like Search growing 48%. You had Office and Commercial… Office 365, 25, Dynamics, 33.

I believe Dynamics ERP, the Cloud version’s in the 40s so it’s actually growing at about twice the rate of the CRM and service Clouds of Salesforce… big numbers there, Pat. I’ll take it home here. I don’t know what I have left, but my only beef has been… I don’t understand why Surface has done so poorly throughout the whole pandemic. This quarter actually kind of made sense because of what happened with supply, but it had another double digit decline and it didn’t grow as much during the pandemic. Pat, I use Surface, I love the product. Why are they not able to grow more? You work a lot closer with that team, so maybe you can even answer that with your response.

Patrick Moorhead: First off, they’re barely in the top 10 of unit volume just because they’re Microsoft. The other thing I’ll say is that Xbox is not necessarily high volume compared to PC. They might do really well with Xbox and have some volumes there, but the biggest volumes is in the PC market. If you’re barely in the top 10, you are going to get scraps even if your name is Microsoft. That is the reason. Companies like Dell and Lenovo have just run rampant across the entire supply chain when it has come to PCs. Who comes into earnings the last six weeks and doesn’t even…? It’s funny, they talk about supply chain and their earnings, but it was the additional 10% they could have sold, not the 25% growth they had before. That is the reason. Surface has the most competitive line I’ve ever seen for Surface, ever. It’s been over a decade that they’ve been in business, but they just can’t get the goods.

They’re not being held up by leading edge Silicon, they’re being held up by things… USB controllers and stuff like that. But, let me dial out. It’s interesting, Daniel, your conversation juggled some things in my brain. Essentially, Microsoft is taking advantage of the biggest things in the marketplace today. If you look at Cloud, and I put it in air quotes, up 36%. Azure plus, this is the new one that I need to get underneath, Azure plus other Cloud services… I don’t know what that is, at over 50% growth. That 50% is obscene. I think on a percentage basis, not only is it higher in number, but the growth dollar I think may have been higher than anybody. SaaS is hot. Dynamics 365 and all its capabilities, 48%. Listen, you and I are always impressed with how NetSuite’s doing, how Fusion Apps are doing on SaaS, that 30% growth rate, but 48% is just absolutely obscene. I was a little disappointed with Office 365 coming in at 17% growth, isn’t that funny? Disappointed at 17% SaaS growth, maybe they’re starting to peak on Office.

Who knows? We’re going to have to see. What’s the other trend? Everybody quitting their jobs. Where do most people in the west go to go start looking for a job? LinkedIn up 42%, pretty crazy. By the way, to your whole Microsoft is social, the one thing you didn’t talk about because you were talking about Enterprise is Xbox Live is one of the biggest social platforms, albeit, for gaming on the planet. They’re very much a social, even though they’re not stirring up political ire with the type of platforms that they have. I’m going to end this on Xbox hardware up 166%. We’re not even before the holidays here, folks. That is absolutely insane. I don’t think that’s just channel fill, either. I think there’s some real end user poll. I don’t think it’s the million Xbox’s sitting out on a barge out in the San Francisco Bay or something, but overall just crushing it. I think if I dial out and look at everybody and how they did, if I had to pick a winner, it’d probably be how Microsoft did this go around.