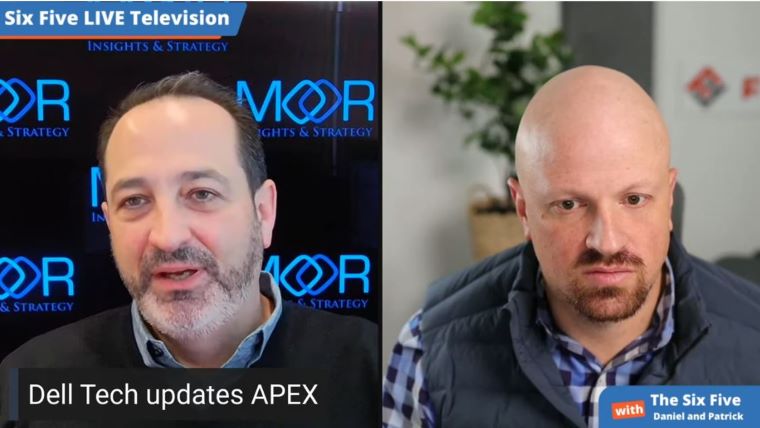 Patrick Moorhead: All right. If you don’t want to give me a chance to talk-

Daniel Newman: Oh, you want a chance? No, no. Let’s go. Rock and roll.

Daniel Newman: Floor is yours.

Patrick Moorhead: Yeah. I wanted to shed a little bit of history on this because I think it’s interesting. When they came in, the odds on discussion was that he was going to ax all gaming. If you remember, Apple came in not only dominating smartphones, but app stores and content distribution through their app store. Then there’s the iPad. If you remember, Microsoft had a bunch of missteps in smartphones. They had two big missteps there.

Windows 8 was essentially a disaster, and Windows 8 was supposed to be the operating system that gave iOS a run for its money. Short, it didn’t. It couldn’t get application developers to come in and make tablet applications for Windows. It was all focused on enterprise. Anything that had a consumer hint to it. Office 365 just came on here, so the going big on gaming is a big deal.

There haven’t been rumors. I think once Microsoft found a way to make money off PaaS, gaming services, because they are the platform for multiple games out there. They convinced themself that this was a… It was an enterprise play. But they also then realized, hey, we might not be good at community, like a Facebook and a Twitter, but we’re really good at gaining community. So I think it was an interesting move. This is an exclamation point that gaming is big and big for Microsoft.

If I look at, I hate to use this term, the metaverse, I could have seen potentially a play where Apple might have wanted to buy Activision Blizzard because Apple is incredibly weak in gaming market. Their max don’t even play the catalog of the top games out there. And Apple has an aspiration to own the metaverse. I could have potentially seen this as a defensive move, but what that said, if the deal goes through, absolutely you’re going to see these Activision titles all over the metaverse everywhere out there.

My final commentary is around the strategy and the timing of Microsoft. I mean, not that I’ve been binge watching Succession, Daniel, but I have been binge watching Succession. And if you recall, they got a hostile takeover based on what Waystar was doing in their cruise line division. A lot of it had to do with the sexual issues. Activision, what’s going on there? The executives are under fire for sexual harassment. So I think Microsoft saw that, probably talked to some of the boards of directors, in Succession style, and here we are.

Daniel Newman: Yeah. Absolutely. Real world is the big difference, but of course that was based loosely on some things that I think some people thought might have happened. But we sure do become committed to our shows, don’t we? It’s unbelievable how that happens. All right. Big topic. Probably the big story of the week. But, Pat, let’s keep moving because that’s what we do here. We do the 620 and we only have 35 minutes to get through the rest of our topics. Dell Tech made some updates to APEX and making a big announcement of some multi-cloud related services.

Patrick Moorhead: Yeah. X as a service is huge. We’re not in a world in public cloud only. We’re in a world of hybrid and more than likely multi-cloud. HPE got the jump on getting out there, and Dell has a much larger property X and service called APEX. What I mean by larger is that it not only includes enterprise and data center, but it also includes PCs. So the estate is larger.

This week, again, we don’t cover the news. You can read the news, but have to talk through what they did to give you context, they made four major announcements. Actually six. First of all, new multi-cloud data services, new backup services, updated data storage services, and updated VMware cloud services. They also put out two new DevOps platforms with Amazon and also with SUSE Rancher, and finally project Alpine.

Whenever you hear a project from either Dell or from VMware, it’s still in the ovens being worked on. They’re bringing essentially their own IP on project Alpine for block and file storage. They’re bringing that IP to AWS, Azure, and GCP. You can read the details. I’m going to do a writeup. Daniel, you did a writeup. But net net, for me, this is the next step. Dell Tech is playing a little bit of perceptual catch-up in relation to HPE right now.

They’re prioritizing areas in their core strengths and defensive moves in storage, backup, and data protection. Compute’s moving along, as I would expect. DevOps, to me, looked better than expected. The long-term game, hybrid, multi-cloud. HPE might have gotten the first jump, but this is a decade long transition.

Daniel Newman: Yeah. We expected Dell to step up and be a significant player here. You are right. The GreenLake move definitely was a first mover. But we’ve seen all the players, Cisco+, Lenovo TruScale, and Dell, many of the bigger on-prem IT OEMs, all considerably participating and understanding the importance, able to offer on-prem subscription cloud type services. It’s ironical, Pat, on-prem cloud.

Look, they’ve got the right partnerships. They’re partnering with SUSE, VxRail. They’re partnering with Microsoft, AKS, Google GKE, Amazon EKS. I love all the letters. But the point is, is that they are tied to all the letters and are basically building something that’s going to take all these prem workloads, 70 to 80% of what’s out there today, and allow companies to connect them.

The services are still somewhat sparse. We’ve got a lot of other types of services, data services, compute services, networking services, edge services, that some of the others are already putting into market. But I think Dell is comfortable. They’re comfortable that they’re making strides, making steps. They’re focusing on their giant customer base. They’re focusing on a small number of regions where they have a lot of density and they feel they can immediately make impact. I think we’ll be getting an update in the next six to 12 months on how this is really going.

I don’t think it’s going to happen immediately because this is long term. But overall, Pat, I think it’s encouraging motion for the company and they keep pressing on. So let’s get on. We made a little time up there. All right. You want to wing back here?

Patrick Moorhead: No, no, no, no, no. We’re all good. I just wanted to show this holistically, what APEX is all about, and some of the updates. It’s very hard for me to say, in reality, one vendor is ahead of the other. Therefore, I default, Daniel. I mean, I can go through and say, hey, which data storage services is more competitive across the vendors, but it’s really hard holistically, and until I start seeing some monster numbers, growth numbers. Let’s not forget AWS is growing, what, 40, 50%. So is Azure. Sorry, AWS is 30%. Azure and GCP are 40, 50. Until we start seeing big numbers and growth numbers like that, it’s hard for me to even say that this thing is a freight train. Sorry for the double back there.

Daniel Newman: No, it’s okay. It’s okay. I mean, we’re seeing big growth, but it’s still growth on small numbers. And so, we need those numbers to get a little bit bigger, density and more customer cases. But I think these things are going to play out, but the competition’s coming from all sides. It’s coming from the public clouds and it’s going to come from them.