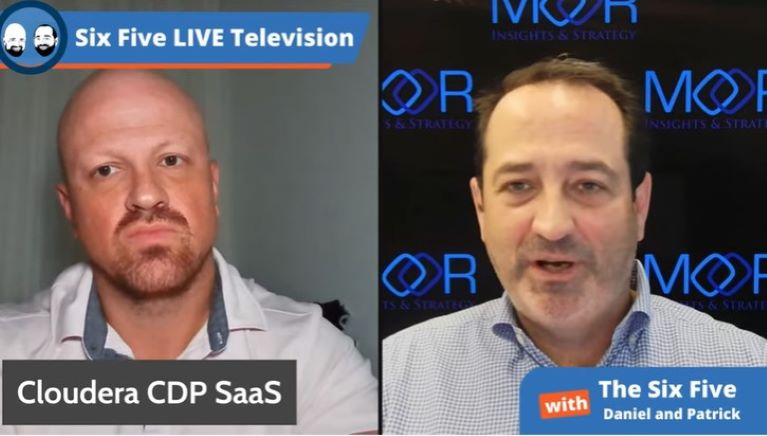 Patrick Moorhead: Cloudera made one of their biggest announcements in the company’s history, and it’s called Cloudera One. So if you’re not familiar with Cloudera, what they do is, they’re an end to end data management company. All the way from ingest and management and security to data lakehouse data, warehouse, AI, and even working on those machine learning algorithms. They have been an on-prem solution. As they started, they extended to the cloud, but you still had to manage it. And essentially what that did is that made it really hard for the data scientists, the developers, the ML engineer, the BI analyst, and the business user to just jump right in and get started because essentially you had to have somebody managing the infrastructure. They had to manage the compute and they had to manage the server. CDP One is a SaaS version of this, right?

So it’s simple to use. There’s no operational skills necessary. It has built in end to end cloud based security. So if you do care where it’s being hosted, the first version of this is coming out on AWS, but based on the company’s relationship with Google and with Azure, I’m fully expecting for that to be an option, too. And this really expands the portfolio from this target market global 2000 for the company to really the global 5,000. And not only are these new types of companies, but they’re also new types of personas, right? You’ve got IT execs, you’ve got data science leaders, and then you’ve got data platform owners and it really does financially open the aperture.

Now, the company’s private, which means it doesn’t have to really talk about all, let’s say the financial implications of this, but for my simple math here, in terms of looking at the market size, I think it likely at a minimum doubles the footprint of the company. So good launch. I haven’t written anything yet, but I will. And you’ll first see it on Forbes.

Daniel Newman: Yeah, absolutely. You’re always the Tom Toms for giving deeper analysis of the news it hits. That’s kind of what we do here, but for those of you out there, I’m going to plug Pat’s Forbes column. He does a really good job over there. Yeah. So I think you made a couple of really good points. Broadly speaking, a lot of these companies that have rich histories big data are starting to be seen as a little bit more of an older technology and have been disrupted by some of the players that have come in the hyperscale clouds, the snowflakes, the data bricks, this is something that happens in every industry as disruptors enter the fray.

Over the last few years, you’ve seen Cloudera migrate from a heavily prem-based offering to a hybrid-based offering to now having a SaaS offering. And I think this was an inflection point that the company really needed to go through with CDP One, SaaS is important, giving customers a way. SaaS is one of the best vehicles for doing that. Cloudera of course, went private over the last year. And I think the large intent was to actually get products like this launched and give it a fair runway time to have adoption take hold. And so with CDP One, I think the company is putting them in a SaaS offering, putting together compute, cloud storage, ML, streaming analytics, enterprise grade. I think I counted faster than my fingers, but my point was there was many things going in.

The company reducing operational costs that can be in a few different ways through the streamline to SaaS-based offering, can also be through the low and no code capabilities that they’re building that are going to enable companies to have citizen developers be more involved in the data pipeline. And then of course they’re proclaiming to be a first and only that have built-in capacity to ingest data from on-prem to the cloud. So that’s kind of an interesting thing to keep an eye on is, does Cloudera CDP One offer things that are truly unique and different than the competition?

I think as a whole, the move to SaaS is important. I think this is a big launch. We will be at Cloudera evolve. Last thought and I’ll get on song to the second topic, but this effectively, I think you and I are both going to be really interested in hearing customer stories. Customer stories about A, how did their current customers expand their business with Cloudera? And B, how did it help a new breed of customer come into the Cloudera fold to basically gain that net revenue expansion that’s so tightly wound with SaaS-based offering. So, that’s it.