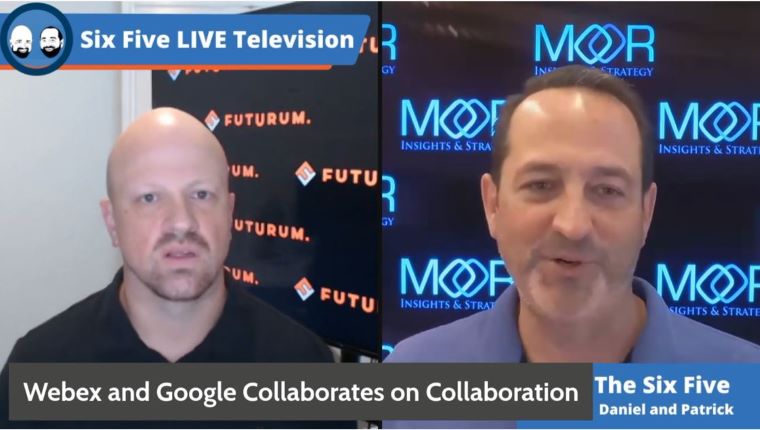 The Six Five team dives into the announced partnership between Cisco Webex and Google Meet.

Patrick Moorhead: And that is that Cisco, WebEx and Google meet interoperability. And he might be like, oh, what’s the big deal with that? Well, here’s the thing. When it comes to video rooms or video equipment, you just can’t talk to each other. Sure, your PC can talk to another person’s PC, but guess what? If you’re running Zoom, you still can’t connect using WebEx. It’s as simple as that. It’s like, duh. It’s an impedance mismatch. One of the things though that end users were trained on their PCs is they wanted the ultimate flexibility. If their customer used Google Meet, they use Google Meet. If their customer used WebEx, it used WebEx. What Google and Cisco announced this week was that their devices will talk together. If you have a Google Meet device and Google did announce two or three pretty unique devices and devices that I think finally make me think that they’re in the game, you can connect to our WebEx Desk Pro and it’s going to be a button that literally is Google Meet.

You click on a link on my Desk Pro here from Cisco and it will give you the opportunity to run a Google Meet video chat. There’s a ton of details on what’s supported and what’s not but I’m going to let you read about that. I think the most important thing that isn’t supported, there’s lots of support, don’t get me wrong, but what isn’t supported is the encryption, end to end encryption that you can get with Cisco’s product. If you connect a Cisco to a Google device, you cannot do end to end encryption yet. I don’t know if it will be an option. Quite frankly, there’s a lot of massaging that Google has to do on that video data. With that, I’ll turn it over to you.

Daniel Newman: Yeah. This topic actually will flow somewhat neatly into our next topic neatly. Ironically when video was room based only or primarily room based only, there were standards. Standards like H.323 that enabled IP video systems to talk to each other. You’d have poly-com before it was poly and you had Cisco. And those were probably the two biggest players. And historically you had a lot of different hardware, different iterations and versions and years and these systems all had to talk to each other and it was complicated. But by creating standards, you had to have gateways and gatekeepers and such that would simplify that. But essentially hardware could talk to hardware. Now, throughout that pandemic, what we have was a super fueled, supercharged implementation of video inside of the work ecosystem but most companies picked a few different platforms or standardized on them.

And because of things like web RTC, instead of really saying, “We’re going to have our systems and you’re going to have your systems and we’re going to use our systems in your systems,” we used whoever’s systems. Meaning, send me a Zoom link, send me a Meet link, send me a WebEx link. And we just jumped on each other’s platforms. Most of us don’t use hardware. Pat, you and I, because of the work we do, we have systems from Poly, we have systems from Cisco and we use them but we don’t always use them all the time. You and I, the backbone, we call our Desk Pros, we talk to each other on our WebEx because it’s both all on the expressway. We can click to click, point to point on different networks, but we can talk on that system. But if I wanted to use Zoom, you wanted to use the WebEx that’s not possible.

What we’re actually seeing here is what I think is the movement towards creating more interoperability as we re-return to a more hybrid and in person work situation where companies have to really think about the fact that video has been adopted at scale. Remote work is here to stay. People are going to work in offices all over the world. And even if your entire enterprise has done a good job of delivering standards, the chances of your entire supply chain, your partners, your customers, your training, education, anyone in your ecosystem all being on the same system are going to be smaller. Creating a world where there’s more options for interoperability on systems that are popular and used in different enterprises is going to be valuable.

WebEx, which has historically been one of the more closely held architectures primarily because their desire to keep everything very secure has not really opened up the kimono. You mentioned that this doesn’t fully enable all the security features but as Google’s popularity grows, as its platform grows, I think Cisco is realizing that it is probably going to limit its ability to grow if it doesn’t start to think about how to be more interoperable. And so this is a good example, it’ll be a good test case. And I think it’s a good chance for the market to see. And of course, if Google, which often does wonderful in software but struggles with hardware, can actually be successful with hardware. That’ll be another thing to watch from this whole launch of Google getting a little bit more weight in hardware behind its software path. That’s kind of my take here. And like I said, I think this flows really well into our next topic.

Patrick Moorhead: Yeah. And I really appreciate the historical web RTC perspective. It’s what’s new here too, is that there’s actually interaction like chat, that will come along with this interoperability. Stuff like whiteboarding, things like that, that make it a lot more complex. Thing I haven’t figured out though, Daniel is why Google? And why WebEx? Why not another partner? But I’m whiteboarding that to figure out is it weakness versus strength? Strengths versus weaknesses? I would love to have been a fly on the wall with their corporate strategy folks, but hey, let’s move forward here.