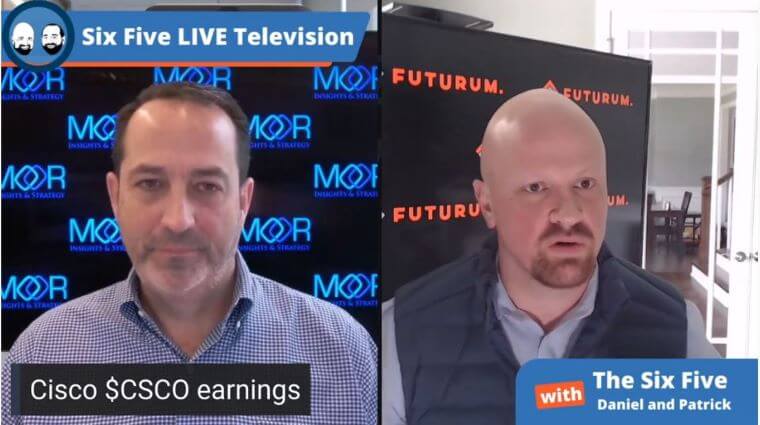 Daniel Newman: Next week will be earnings on fire once again, but this week was a quiet week. Our earnings coverage, we’ve got a little bit of a break, but we didn’t get an entire rest. Cisco delivered its earnings, Wednesday? Is it Friday? It was Wednesday, Pat. After the bell, Chuck Robbins came out and he gave us some pretty encouraging news. The company saw 7% year on year growth. And again, this was after five quarters of revenue retraction and some concerns starting to grow about whether or not prem based IT was going to have a return.

Throughout the whole pandemic, cloud native SaaS, public cloud, very resilient. Big IT, OEM style companies, Cisco, HPE, Dell’s ISG business, IBM, all struggled to find that growth. All whether single digits up or down. Cisco, this was a big inflection point for the company to get back to growth. Came in at 12.8 billion, 83 cents a share on earnings. Guidance was in line, but yet the stock still fell hard after it reported.

Daniel Newman: For whatever reason, Pat, I think people wanted to see 40% growth from Cisco. This, by the way, the bookings that the company has, has been some of the most robust backlog of business the company has seen in a long time. It’s creating cashflow, it’s generating earnings, it’s seeing strength across all of its segments grew, Pat. Security, infrastructure and applications grew. We saw 13% growth in security. Clearly strengthened by a lot of visible security events that have taken place over the past several months. SolarWinds, Microsoft, the recent ransomware attack on the Colonial pipeline. People are paying attention and making investments in security. Six and 5% respective growth in the enterprise infrastructure and applications business. And Pat, probably the one thing I’d really want to think that we should point out and I know you’ll talk more to this is strong software numbers, $14 billion in software, 81% of this is now in what they consider recurring revenue. And they’re seeing that grow at about a 7% rate.

Overall, as I see it, Cisco had a robust quarter. Needs to show some sustained growth with multiple quarters. Needs to see more growth here in North America as a lot of its growth came from APJC they call it. Everyone says that a little differently, Pat. But I think overall, I called this a bellwether. Ahead of earnings I put out my commentary to the media. I said, “Cisco is a bellwether for the resiliency of IT.” Next week when we get Dell and we’re going to need to look at their ISG numbers because they lead in a lot of those categories as well. But this was an encouraging moment, but sustained growth is what the market is going to be looking for now.

Patrick Moorhead: Yeah, it was great to see this, Daniel. You hit a lot of the highlights and I like double digit growth. Who doesn’t like double digit growth? And the company just needs to balance the smaller areas that are double digit growth, obviously with the larger business, which either is flat or not growing. We have double digit Wi-Fi 6, Cat9k, you have double digit WebEx and security. I love it. The other thing that I’m most impressed with and this is why Cisco’s valuation is so much higher than others, that you might consider an infrastructure play is because the subscriptions that they’re bringing out. And 81% of their software sold as a subscription. That’s incredible. And I can’t wait to hear when they’re talking about the entire business as a subscription, when you get into the infrastructure as a service, which is getting so much more popular.

You know what’s interesting? The growth in APJC was staggering. And I’m thinking that the infrastructure that requires people to be at work and the projects that they’re working on that require this infrastructure, APJC the situation is better. And yeah, I get Taiwan is having their momentary troubles, but it’s far ahead against Western Europe and the United States. It makes sense to me. What I’ll be looking for next quarter is they can take this growth to North America and Western Europe, but still, I don’t want to take anything away from the company’s strongest demand in a decade measured by product order growth. Good job, Cisco.

Daniel Newman: Yeah, absolutely. Good calls, Pat. We’ll talk more about this, next week will be a lot of data. By the way, looking forward to seeing Dell and HPQ report, because I want to hear, is the PC boom still on? I’ve got some thoughts about that, but we’ll save that for the next show.