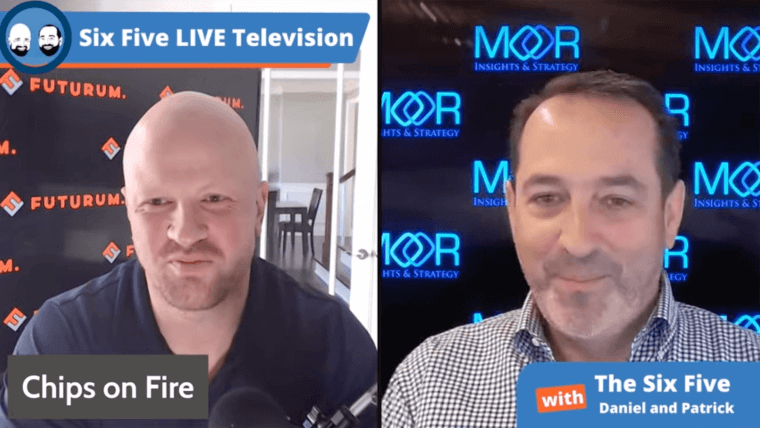 The Six Five team talks about the latest news hitting the chips and SaaS space in this short video take.

Patrick Moorhead: Let’s go to our next topic here, is Daniel I joke around here, chips and SaaS, at the end of the day, a decade, 20 years from now, what will still be standing will be SaaS and chips. There’s no doubt about that. More chip action. First off, GlobalFoundries, Bloomberg had a piece that talked about Mubadala putting it up for an IPO for $20 billion.

I’ve talked to Tom Caulfield, CEO there, and so have you. We had him out to Six Five Summit last year and we’re going to bring him back this year.

Daniel Newman: Sure are.

Patrick Moorhead: They’re already talking about an IPO. To some people, this was a surprise, but I think the timing was great for Mubadala to float this out there. I mean, look at where we are. There was an article yesterday quoting TSMC and Intel’s Pat Gelsinger saying that we’re not going to catch up until 2023 on chip. Great, great opportunity. Then we’ve got two big AI folks, SambaNova and Groq. One hitting training and the other one hitting more inference for hundreds and millions of dollars. Pretty crazy.

Let me see, SambaNova came in at $676 million in valuation and looks like Groq raised 300 million. I’d have to dive in and see what that inferred valuation means. AI is hot. Listen, NVIDIA is a beast. They’re the great white shark of AI and ML. There’s a lot more, I think, ability for these companies to win in inference, but when it comes to training, I mean, NVIDIA just keeps moving. Net-net incredible opportunities out there. I think it shows just how much more competition we need.

GlobalFoundries, that could be a huge IPO. It could drive a ton of attention. By the way, it’s a very opportune moment for the company to consider that, just like it was a very opportune moment for Intel to come out with its strategy to bring more chip-making back here. I don’t know as much about the other two, but I did track Groq a little bit. I’ll just say deal was led by Tiger Global and D1, two really big VCs.

It had some serious partnerships. TDK, for instance, was one of the big … what you’d say a follow-on investment to it. The company’s pretty focused. It’s got some very consistent form factors and this $300 million raise put the valuation in the billions, okay? Just to be clear. It was huge. It was their series C. It was a 300 million. It’s basically going after what they believe is a 65 to a hundred billion dollar market by 2025. That’s just AI semiconductors by the way. It’s one to watch.

All these chip companies are really important right now. We started off about you can GTC the future at GTC 2021, Pat, but right behind it are a bunch of innovative companies doing really interesting things that are going to change the world.