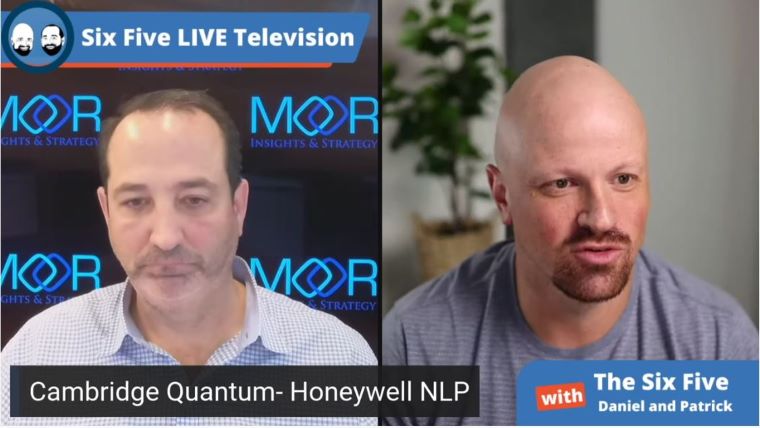 The Six Five team talks about the Cambridge Quantum announcement of the release of the First Quantum Natural Language Processing toolkit and library.

Daniel Newman: Another story that’s in effect that you have been really on the front edge of, but we both work very closely on, and that’s what’s going on in the quantum space. And this week there was an announcement from Cambridge Quantum Computing, or CQC, and Honeywell, which for those of you that maybe forgot this, because news cycles come and go and come and go, there’s going to be a tie-up between these two companies. Honeywell is going to be funding and investing in a merge that’s going to happen between Honeywell and Cambridge Quantum Computing or CQC to create a new company that will exist outside of Honeywell. And that spin should be happening very soon.

So if you want to think simply about it, because there’s no way to think simply about quantum computing, but the simplest way to think about it is Honeywell is bringing the actual quantum computer, but in order to do anything with a quantum computer, you need software. And Cambridge is a company that’s spent a ton of time, has a lot of research, and has been working to build software. So one of the things you’ll kind of tend to hear when you’re listening companies, all the big companies that are involved in quantum, talk about quantum, is that Quantum’s kind of far away from really doing anything super meaningful in a way that the majority of people will understand. You kind of hear that. It’s like, “Hey, we’re getting more and more accuracy. We’re reducing the error rate. We’re able to create more usable cubits that can be applied towards things.” But what we kind of have come to the conclusion is, the quantum computer is going to be a marriage with the classical computer. They’re going to work together to create outcomes.

But Cambridge actually announced something that’s going to be usable right now, that companies are going to start applying into their business. And that is a quantum, they call it QNLP, or Quantum Natural Language Processing Toolkit and Library. They’re calling it lambeq, and essentially it’s the first software toolkit for quantum natural language processing that can take sentences and convert them into a quantum circuit. And this is being released open source, so anyone that wants to use this can use this, and very clearly CQC said, “This can run on computers, like IBM’s quantum machine, that are not Honeywell.” So it’s not a tie up in any way, even though the two companies are working together.

I think it’s a really interesting thing, the way … I had a chance to talk to Ilyas Khan, the CEO of Cambridge Quantum, and he was basically kind of walking me through it. Because even as technical, as much time, Pat, as we spend in quantum, I always need a breakdown on this stuff. And one of the things that he said to me that really stood out was that right now, with NLP and neural networks, when you send a query out there, effectively it’s like going into a magic black box. So once it goes into that neural network, there’s almost no way to know how that response comes back. How it actually got that understanding of the language, and how it is able to interpret it. And so when you start thinking about inference, this becomes really important. But with quantum, it’s got full transparency. So when you do this on a quantum circuit, everything becomes exposed, and that’s something that’s really important.

So for instance, like Merck, which is one of the big biotech companies, it got a lot of press recently because it’s got the supposed magic COVID-19 pill. It only took … Amazing. We had like three, four, 18 vaccines, but we couldn’t come up with a magic pill. Well, Merck supposedly is going to be the one that’s going to do that, and they’re one of the first to test lambeq. And basically what they found was that the level of accountability that it shows is just going to be absolutely critical for the application of NLP, for use in biotechnology and medicine. So we’ve all heard that quantum, for instance, is going to be … Health care is going to be one of the big, meaningful applications for quantum, right? Whether that’s finding drug compounds, helping pharmaceutical trials be streamlined. So Merck came out and basically said they see this as a massive advancement.

I see this, Pat, as one important inflection point for quantum, where we’re kind of increasingly seeing from theory to application. And so as companies like CQC develop these things that real companies can use, they can get their code in a Python repository on GitHub, they can basically put it on any quantum machine. So if you look at a quantum machine that might be available for simulation using Amazon Bracket or using Azure Quantum, it turns into something that becomes accessible, Pat, and you and I aren’t developers, but it is encouraging to me, because one of my biggest concerns about AI and LP and everything else is transparency, and Honeywell, in using quantum, and this greater level of transparency and accountability, is attractive to me.

Daniel Newman: Yeah. Absolutely, Pat. Well, let’s keep moving there. This quantum stuff, we can give so much, and then after that, we need to turn it over to the Paul Smith Goodsons, like your quantum guy, who goes deep every time. And by the way, check out his Forbes column on this. I have a column too on our research note, but this is a topic, like I said, I love seeing it moving more and more towards applications.