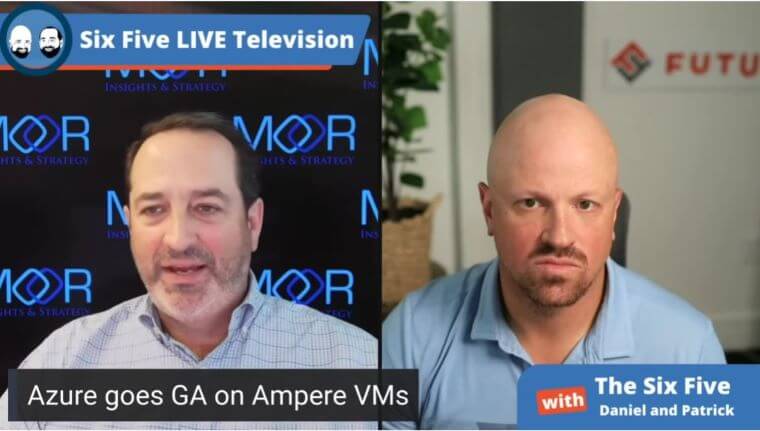 The Six Five team talks about how Azure goes GA on Ampere VMs.

Daniel Newman:  Another homegrown this time with Azure.

Patrick Moorhead: That’s right. So Ampere is the leading Arm server processor provider to hyperscalers. AWS, right, came out first with their own homegrown, but it’s only available on Azure. Ampere is now available on Azure, almost available, almost GA on Google Cloud. Also available on Oracle Cloud and Alibaba Cloud. So this company is really making a move. And Arm infrastructure overall between server and clients is very, very strategic to Microsoft. So not only are they re-rolling all their tools and all their applications and operating systems on the server side, but they’re also doing this on the client side. And we’ve seen the Surface Team embrace Qualcomm Arm based processors in their own product line. So a couple surprises for me with this is, first of all, more regions than I thought, 10 regions, VMs, and containers. They’re supporting four different operating systems. They had some really good quotes from folks like Ansys, Avanade, Datadog, Elastic.

I know there have to be more because they do need to, what’s the right word? If you made a web application, you don’t have to worry about doing much work. Only, let’s say if you wrote something in C++, would you have to recompile. But I hear stories of it taking five minutes to get your application ready to move from X 86 over to arm, multiple languages for development, Java 11, Java 17 open Java. Native.net six, and gosh, Visual Studio 22 if you’re looking for an IDE to help you to develop something for C++, C# web applications, and multiple different VMs with different types of processing memory and storage capabilities. So NetNet for me, Microsoft announced more than I had expected. And Ampere is a company that quite frankly I didn’t pay much attention to before, but I think everybody needs to because the next step in what they’re doing is they’re going to essentially create custom CPUs and more custom silicon to surround that.

Daniel Newman: This is the trend line, Pat. This is the trend line Arm Ampere, hyperscale cloud providers, building their own homegrown. You’re going to see it. Accelerator, CPUs, VMs, this is how they’re going to increase operating INK, op INK and margins. It’s how they’re going to define and differentiate offerings. I think the key and the question is the impact to the traditional CPU providers and the traditional server providers, and what that impact is going to be. X 86 of course is going to be the big question mark. We just talked about Intel. The good news is compute is going to grow as a whole. So the question is, what’s the distribution of a percentage of TAM on these homegrown versions versus the off shelf? And so that’s going to be what you and I always say, there’s got to be three plus more competition the better. I’m going to quote you. And I think more competition better.