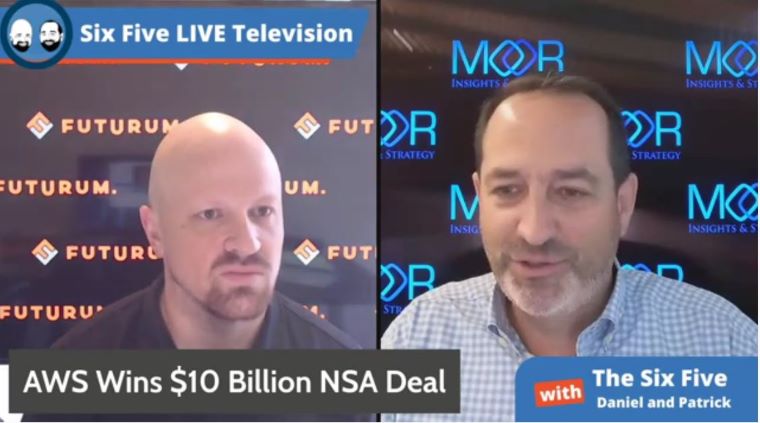 Patrick Moorhead: AWS 1810, billion-dollar deal to supply the NSA. Gosh, is this going to be another Jedi redux here, Daniel? What’s going on?

Daniel Newman: Geez, Pat. First of all, I loved… One of the articles I read, it was something like, “The NSA, The National Security Agency, was awarded a secret cloud computing contract worth up to $10 billion.” Guess [crosstalk] what? The secret’s out, everybody. They won. I think it was a contract that had a code name Wild and Stormy, which is just for fun. Yes, much like Jedi, I believe, Pat, that within like hours of the supposed award that we already saw Microsoft file an appeal on the award. I do wonder if any large government cloud contract will ever be awarded again without controversy or contestment from the competitors that feel they did not win.

All of these companies have continued to evolve and build better and better mouse traps and more and more vertically- and horizontally-integrated solutions. I’m sure all of them, whether that’s Oracle, IBM, Google, or Microsoft, or AWS feel that they’re more than capable of supplying every one of these contracts. The details on this award are pretty sparse, Pat, so I actually think the most interesting debate here really is, what does the future of government contracting for cloud look like?

My take here, Pat, is two things. I want to keep this particular segment kind of short because we went a little extra on the beginning one, so we have to always make up for it, but to what I had just said is I think, Pat, unfortunately, we will see every major cloud contract in our future will be contested. Secondly, I actually do believe that single award is going to go by the wayside in the future. This will go by the wayside as almost instantly as fast as we saw CEOs like Andy Jassy and Satya Nadella stand up and acknowledge that multicloud is a thing.

The CIA had what was called a CTE contract that was worth supposedly tens of billions. Guess what happened, Pat? It was awarded to five companies. That means [crosstalk] every major cloud player in the U.S., I believe that entails them all, IBM, Google, Oracle, AWS, and Microsoft, were part of that award. I think that’s what we’re going to start seeing in the future.

If this big Wild and Stormy contract ends up being a wild storm of litigation and ongoing press and delayed deployment, which is really what needs to happen, I think we’re going to see more and more governments are just going to start splitting them out and creating what I would say almost are these buffer zones where $10 billion is split up not five ways 2 billion, but it could be nine goes to one and one goes to five. It’s going to give them these levers to pull to make sure if everyone’s awarded, maybe it will speed up the deployment.

Patrick Moorhead: Yeah. I’m really wondering if this will actually help multicloud become easier? Today, multicloud is not easy. You have to have a data plane, you have to have a security plane. You have to have a lot of other things, networking plane. Networking is different and I’m curious if this will force a government API that says, “No, no, no. All of my suppliers are multicloud. You need to get on the same API because I’m not going through all of this.” Okay, yeah. By the way, for the record, I don’t think Andy Jassy has ever said multicloud is a reality. He says hybrid cloud is a reality and the company introduces multicloud capabilities like a Kubernetes.

Daniel Newman: Though, Pat, says everything. Okay, you’re right, he may have never used the word, so please, if you’re out there and you want to correct me, feel free to use this as an opportunity.

Patrick Moorhead: I already did, Daniel, so-