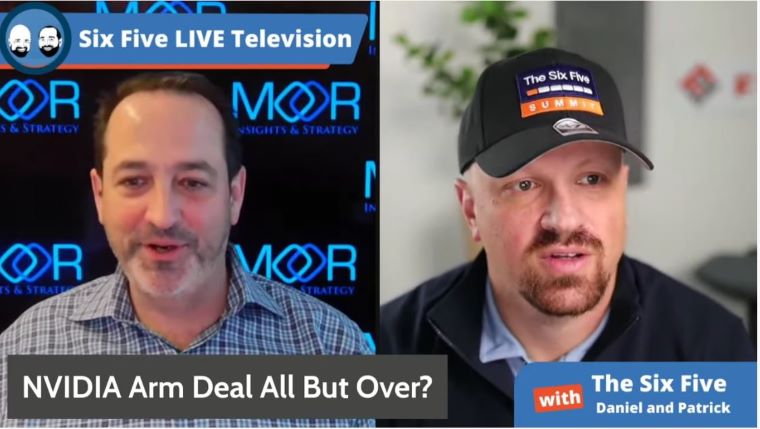 The Six Five team discusses whether or not the NVIDIA ARM deal is dead.

Patrick Moorhead: Daniel, let’s go to our last topic here. Bloomberg’s Ian King wrote an article about NVIDIA quietly tiptoeing away from the Arm deal. What the heck’s going on here?

Daniel Newman: Yeah, I mean, this is completely unverified right now by any executive on either side of the house. And neither NVIDIA nor Arm has come out, made any sort of actual statement. But it was sort of an interesting and timely notice that came out amid some real strong tech selling, amidst the crazy fed. You got a war going on. It’s like, well, why not? This might not be a bad time to drop a bomb of news to maybe start to let the market down softly that this isn’t going to happen. Now, Pat, between you, me, and the fence post, it’s almost been a depreciating scale of approval in my mind that this would happen by day. Meaning like literally, if you take me back about six months ago, I was like 50/50. When it first happened, I was like, oh, 60/40 I think they can get the this done.

And I think it was probably a couple months ago when we started to see the UK starting to push back harder, additional probes coming out of China, Europe, the US, everybody. We hear that the… I believe the FTC had planned to file a lawsuit. You just started to hear this stuff mounting. We all remember NXP and Qualcomm, and that didn’t have nearly the actual public headwinds. And just as time kind of went on, you just started to get this feeling like this isn’t going to happen.

So while the there’s nothing verified from this news item, I can’t help but feel that there’s something there. And so I kind of think in the middle of all this sort of negativity and all these sort of macro events and COVID winding down and war in Ukraine, I just think maybe it’s not the worst time to start to kind of float that out there to say, “Hey, if we’re going to be getting sold off, we may as well just take the whole hit right now.” Because you’ve seen NVIDIA’s fallen. And by the way, Pat, three months ago or so, when the first news of some serious litigation or legal challenges came out, it didn’t actually ding the stock at all. The company was just charging forward. And so somewhere along the line, the market had to react.

So I can’t even tell you, by the way, if the reaction has anything to do with this news or just has to do with the general pressures that NVIDIA is under because it accelerated it so fast. But I do want to say I had a chance to talk to Barron’s, and I did put out a research note about this. I actually don’t think this will have as big of an effect on NVIDIA. I think this is a tough thing for Arm though, because SoftBank’s in a tough place. We just were talking about [inaudible] Claure, I believe this is how you say his name, COO, just left this morning.

This deal was a fairly significant one for the company to try to get something back from a big investment that really hadn’t returned very significantly. And SoftBank’s been under a ton of pressure. There isn’t really a logical landing. We’re hearing IPO potentially for Arm. Arm is, I think, needs a big injection of R and D and support. And that’s what they were going to get from NVIDIA. We heard things Pat, like consortiums. We heard ideas like that from Cristiano Amon from Qualcomm. We’ve heard the idea that maybe some of these other companies building on Arm., but Arm right now is basically enabling a series of the world’s largest companies, from Qualcomm to Amazon and Microsoft, to build chips. I’m just not sure how much it’s enabling the rest of its licensee ecosystem. So whether NVIDIA would’ve made that better or worse, wasn’t clear. But Pat, it’s not official. Nothing official happened this week, but I’m at 10/90 now or less in terms of this deal getting done.

Patrick Moorhead: This is so target-rich and conversation-rich, it’s not even funny. I mean, it talks everywhere. Let’s not forget that Qualcomm was being attacked by every regulatory Arm out there. And you know what? Guess what? They found their way out, right? So just because NVIDIA’s getting some scrutiny to me doesn’t mean, oh, it’s dead. There have been companies… I mean, heck, Intel’s still fighting an EU battle on its fine it got in 2009, you know? That doesn’t score a lot of points with me, or doesn’t carry a ton of weight. I was excited about Arm and NVIDIA coming together for the competition it would bring into the x86 market. We have a PC market that is 98%… Well, I guess I have to look at the new MacBook stuff, but let’s just say it’s a hundred percent. Yeah, let’s just say the PC market’s 93% x86, the server market is 95% x86.

I really wanted to see NVIDIA and Arm come in and just pour a tremendous amount of investment into both those markets. And also, I don’t want anybody to be misled by who had an issue with this. Regulatory bodies may be writing the press releases, but this is absolutely NVIDIA’s competitors at work here, undermining this, okay, and bankrolling this effort to derail it. Because in the end, Daniel, and this is going to sound harsh, IBM’s biggest customers prefer a weakened Arm because that means that they can provide value add on top of what Arm did, kind of like it did before.

Patrick Moorhead: Okay? So they can put their value add on top, and they can innovate. They don’t want Arm to be too strong. And on the SoftBank piece, look at the investments that Arm made since it went into SoftBank. Big core, very big core for smartphones and PCs, two data center cores at different levels of performance, a full automotive ASIL-certified automotive stack, and all the IOT investments they made. And you don’t just make those investments once and then stop. You have to continue those.

So Arm will have to… probably have to raise prices to be able to feed that beast. Now, it’s a private company, so I don’t fully understand… I don’t know all their financials, but all I know is, though, that SoftBank invested, and Arm is either going to have to capture revenue for that R and D at a higher rate, or get out of those markets. Not out of the markets, but doing the value add that they’re putting in which a lot of their customers do appreciate.

So as far as a consortium, can you imagine Samsung, Qualcomm, Apple and AWS and Azure trying to come up with an agreement on a specification for Arm V-10 specification? I mean, it’ll be like the IEEE, which takes like five years to come up with a decision. Anyways, this is target-rich, buddy, and we’re going to be talking about this a lot.