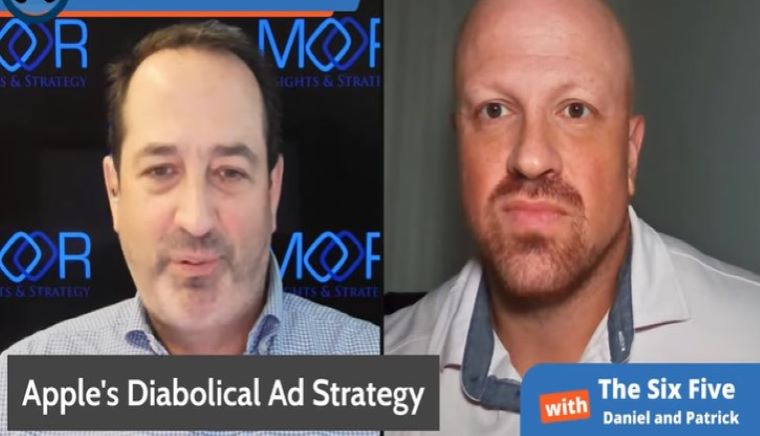 Patrick Moorhead: I have a lot of Apple products, Apple Watch there’s my iMessage phone.

Patrick Moorhead: Yeah. But when it comes to what Apple is doing in the ad space, I think it deserves probably diabolical. So if you recall, for the last five years, six years, Apple has been on a tear talking about user privacy and basically that it’s, I’ll paraphrase it, essentially, it’s a human right. And on the surface, you can’t disagree, right? You should be able to turn stuff off that you don’t want, that’s out there. And Apple was essentially the white knight who came in, who was the opposite of Google and Facebook and every other company that made its money off advertising.

So Apple came in and instituted some controls that essentially made it harder for the Google’s and the Facebook’s and the Snapchat’s to monetize the platform. It was called app tracking transparency. And again, on the surface, Daniel, it’s wonderful. Apple loves the users, but guess what? Surprise, articles from both Bloomberg and Wall Street Journal. Wall Street Journal had an interesting one, before Apple instituted ATT, they were having secret negotiations with Facebook, now Meta, to better monetize the platform. And according to the Wall Street Journal, Facebook would pay Apple kind of like… not the same structure, but pay Apple like Google pays Apple.

And, and once those talks fell through, Apple went and initiated ATT and these negotiations happened between 2016 and 2018. Everybody hardened their positions and, boom, ATT come out. And then the same week, Bloomberg runs an article, Mark Gurman, essentially saying Apple is set to expand ads, new areas of your iPhone and iPad in search of its next big revenue driver. And we’ve already seen apps show up in settings. We show preferential treatment of Apple applications all throughout its content where it’s prioritizing its content and essentially breaking the rules that it sets up for other content providers like Netflix, like HBO and folks like that. And now there’s talk of monetizing all the other apps.

So here’s the way I’m just going to net this out. Apple is saying one thing and doing something dramatically different. And at the end of the day, all my pessimism about Apple’s privacy, that I have been spewing in my articles on webcasts and in my tweets has happened. Apple is going to become an advertising machine. I do have to call out that… Well, actually, I don’t know if it will actually abide by its own rules because it doesn’t abide by its own rules when it comes to applications and content. Advertising that it’s asking everybody else to do. So with that, Apple, shame on you.

Daniel Newman: Yeah. It’s a weekly topic. It should be the FiveFive plus an Apple shaming segment because every week there’s something.

Patrick Moorhead: Are we the only analyst who call this stuff out, Daniel?

Daniel Newman: Yeah, look, it’s kind of one of these weird things, there tends to be two or three disconnects with companies that tend to lead to people not saying the appropriate things. One is, if a stock makes people a lot of money, people tend to be extra nice to those companies. Two, if you have a personal relationship with the product, which in the case of many of the analysts we know, it’s hard to detach.

But, someone told me in a recent meeting that the analyst job is to be critical. And so I won’t call out who said that, but it’s something that sometimes we may seem overtly positive about things and maybe the reason we’re always so critical about Apple is because no one else does it. Because look, we could have segments where we could talk about all the great things Apple does. The company’s clearly got some-

Daniel Newman: So the reason we do this is because we know it goes against the grain. And the thing is, we also do it though, because we know it’s right. First of all, so let me give Apple a compliment. The privacy strategy was brilliant because, A, people ate it up. People ate it up. They go, oh, not only does this company make products we love, but they really care about our privacy. They’re going to lock up my personal life in that little cute little click with the lock. But, here’s the thing that Apple also did… and look, Apple and Facebook going toe to toe, good for them. You know what, two giant companies… Facebook’s a horrible organization. They do terrible things with our data. We know this, this isn’t a secret, but they’re capitalists. So people, they make money and they offer service by the way that people care about.

I keep up with a lot of people’s lives because of Facebook. I keep up with a lot of people because of iMessaging. And, we’ll talk more about that. But long and short here, Pat, is, they basically blew up an industry. They basically changed the rules in a way that would be extremely unfavorable to all their competitors. And they did it under the guise of, we’re doing something good for the consumer. And then, once they’ve blown it up and made it really bad for everyone else, they sort of start changing the rules back and say, well, okay, now that no one else can advertise and we’ve got better data and more data, we’ll start turning up the crank.

Remember the old turn it up to 11. They’re going to start turning it up to 11 now because they’ve basically taken out… Facebook was the biggest competitor standing in its way. And let’s face it, just like software needs a semiconductor to run on, these apps need a device. You said it earlier, I’m going to repeat it, I’m going to kill a mosquito. That’s what happens when you’re close to the water. But anyways, kill the device or kill the app. People still need the device. Now they can just do it right in the Apple iOS.

So you know what? Capitally speaking, Pat, as someone who is capitalistic, good for you, Apple. In terms of your BS fricking, we’re doing this for you, the people though, come on. This is what we’re calling out here. We’re just calling it, look, you’re getting what you get out there. And look, I’m an Apple user, you’re an Apple user, but don’t for a minute, think this is out of the kindness of their heart. As they crank up advertising and add more ads into things that used to be add free experiences, just say, this is what you get when you kill competition, which brings us back to the freaking competition discussion, which again, Apple is still the only company I think that actually needs some antitrust rulings against it. And guess what, Pat, I don’t think they ever will.