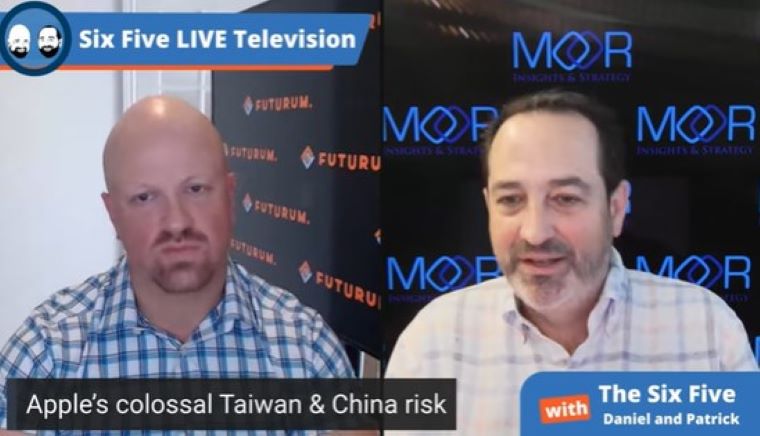 Daniel Newman: All Apple products are made in…

Patrick Moorhead: All Apple semi-conductors are made in Taiwan and a lot of the piece parts that go into every one of their devices are made in China. Now it just hit me, I was having dinner with a person I really respect in the semiconductor industry, a guy named Syed Alum who runs the practice, semiconductor practice at Accenture. And we were just kind of talking about how much supply chains for different companies and it really dawned on me that the colossal risk that Apple has. So Apple is currently worth right now, $2.74 trillion. 100% of its CPUs are made out of TSMC in Taiwan. And is there a chance that China invades Taiwan, heck maybe they just take over TSMC, what happens to Apple? What happens for its ability to crank out these parts? I think people say there’s just no way that would happen.

Well, what was Germany saying before Russia invaded Ukraine, right? There’s no way, right? Like, “Hey, this is a good thing. We’re going to outsource all our natural gas to Russia.” And now when I talk to my German friends, they’re like, “How did we get here?” It’s so obvious, right? And are we going to be at this place, having this conversation where Apple can’t ship and we’re like, “Well of course. They didn’t diversify their supply chain enough.” Does this mean that other manufacturers aren’t as at risk, they are at risk. They’re just not as big a risk, right?

Samsung, right? Not as risky. HP, Dell and Lenovo, not as high risk because the exposure, if you’re buying Intel, a lot of those leading edge processors are made on the west coast of the United States. Are there a lot of other things that are made out of China? Yes. But those lead times for leading edge, if something happened at TSMC, a lot of companies would go down. But the fact that 2.7 trillion of market capital is at risk, I find absolutely spell binding and can’t believe that people are ignoring it.

Daniel Newman: So there you have it, Pat, I’ll leave it at this, craziness, absolute insanity, doing war time drills off the coast of Taiwan and everybody’s just shaking it off. It’s absolutely crazy to me. We know what this means. We passed a bill. It’s more than two years away before we’re getting any relief. And by the way, that doesn’t do anything for, I mean, is Apple going to crawl back to Intel? I mean, who’s going make their chips if something was to happen in Taiwan.

Patrick Moorhead: I don’t know. Or is Apple just cozying up with China right now by doing stuff like this, right? Apple has Taiwanese suppliers to label products made in China, right? Is that a giant suck up to China and a giant slap in the face to Taiwan?

Daniel Newman: Listen, we have covered this, Pat. This is freaking insane. It is crazy. And by the way, this is the Guardian. So all right, the Guardian called it. You called it. I called it. This is not partisan. This is insanity. I don’t know what’s going on. Long and short, we have a real risk here. Hopefully people don’t forget about it. The Chips Act will not fix this instantaneously, if at all. We need to keep being resilient and keep thinking about how we would handle a situation like what happened in Russia and Ukraine. Hopefully we do. I bet we won’t. It’s just not in our society these days to think about anything more than what’s right in front of us.