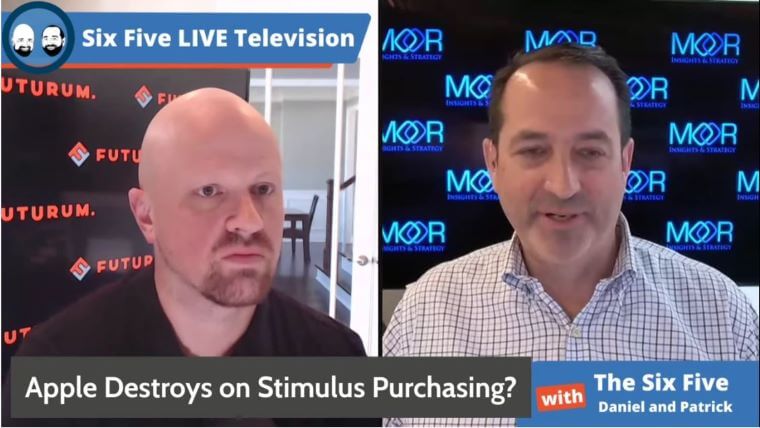 The Six Five team does a deep dive into Apple’s latest earnings.

Patrick Moorhead: Let’s dive into Apple and maybe I can kick that one off. I love your provocative headline there. Apple destroys and stimulus purchasing. I have to say yes. If I look at all the companies who are taking advantage of the pandemic, I would put Apple right up there. It’s ironic when the pandemic started and the notion that people are going to stop buying smartphones and it did impact it in the first half of it. Then people revved it up. Apple came out with 5G. Here we are today. I would say that Apple is winning the pandemic race. The irony, though, is on a percentage basis, the biggest winners here were the Mac and iPad. Up 79% and 70% respectively, which just shows you how much demand there is for end point products given that people have to work, govern, and school from home still.

If I’m giving my awards, if I’m Tim Cook, I’m going to give my awards to the supply chain team. Tim Cook and I were actually at Compaq at the same time. I was a lowly product manager, global product manager. He was running a supply chain for Compaq. He was good at Compaq. He’s great at supply chain at Apple. I think he’s really lifted them up. You combine the roadmap of Steve Jobs and the innovation plus the supply chain expertise of Tim Cook, that’s a real incredible combination. Interestingly enough, is Cook did talk about some potential shortages out there of supply components. If it comes up with Apple, it’s got to be pretty bad. And let me tell you why. Unlike most companies, Apple, they invest a lot in CapEx. And typically we think of CapEx as PPE, property, something else that starts with a P, and equipment.

In a supply constrained environment, for gross margins to go up, this must mean that they had some cost decreases. The only thing that I could ever think of, that it could have a cost decrease, is the M1. Let’s just say, my back of the envelope says that the BOM cost of what Intel used to sell them is around $250. And I would say that the BOM cost of the M1 is between 50 and $75. They can take that right to gross profit. Yes, there’s R&D, but that’s below the line. Doesn’t impact gross margin. But, that is my sneaking suspicion that they are making boatloads of margin dollars on those M1 based devices.

Daniel Newman: Yeah, it was a really solid quarter. By the way, good back of the napkin math. That’s your specialty, Pat. Every part of Apple’s business is performing. No one would have expected Mac and iPad revenue to be up 70 plus percent in both cases. I think it is an availability thing, Pat. It was also a stimulus thing. People got money. Spent money. People that wanted an iPad went and got an iPad. This was a momentary opportunity to take advantage of the situation. And by the way, Tim Cook is also extremely good at that. Couple other things I think are worth noting around Apple. The stories that aren’t being told. One, we didn’t even talk about it, but the company’s lived and died by the iPhone for a long time. When iPhone outperforms and over performs, the company does well. And it did.

It over performed. 65% growth on iPhone. You would think, how does iPhone even grow at this point? It seems like everybody that would have one, already has one or three or five. But, this is also part of the 5G wave. And we’ll talk more about that in a little bit. Also Pat, and this is probably the last thing, they’re executing on services. This was something that I was more skeptical of. Could the company become a stronghold for services? There is $60 billion run rate on services now, Pat. They’re a juggernaut. They’re in TV and in movies, original content. Some of their shows are getting a lot of momentum now. Podcast offering. Credit cards. Now you got key tags.

There’re all kinds of services that are tying to every corner of what Apple does. And by the way, this was a margin enhancement that the company also had to make to drive up its margin. You talk about back of the napkin, margins up, risen by M1 which is center of the ecosystem. I will also say, when you have a services business generating over $16 billion a quarter in revenue, you are seeing extraordinary margin gains when your old business, when the legacy business, was pure hardware. That was another big transition, that the company is succeeding at, that you can only be impressed by it.

Patrick Moorhead: Yeah. Speaking of services, Apple could be in hot water here. The breaking news, this morning, was that European regulators that says Apple has a monopoly in the distribution of music streaming apps to owners of Apple devices. Daniel, you and I know from covering Qualcomm versus the world and Qualcomm versus Apple, when the EU comes out and says that you have a monopoly, the next step is a fine. You have to change your business practices. I’m wondering, could this be, like it was to Microsoft in the nineties, the regulators who will pull Apple down. Just like they did Microsoft. When it was dragged through all of this had to change its licensing for its windows operating system, which at the time, was basically it’s only product.

Daniel Newman: The company needs to regulate. You and I have been first and foremost. When it decided that it wanted to put the hammer down on Qualcomm to get a better deal, it took every resource at its disposal. We’re coming full circle. You’ve got Match, parent company to Tinder, going after Apple. We got the Epic Games. The EU is a police department. They’re going to give you a speeding ticket. You’re going to move on. Whether it’s been Google, Amazon, Apple, everybody in Europe, Qualcomm, they all get a fine. They pay it. They move on.

It’s a fundraising activity. What’s going to be most interesting to watch is will the United States, at some point determine that Apple is acting in some type of monopoly. And by the way, worth noting on that topic too, Pat, is the dominance of Apple devices in the US is substantially higher. Yes, it might be an issue in Europe and in other parts of the world, but the prevalence of people on Apple and on iOS, in the US, much higher. Meaning a much bigger opportunity for the company to use its dominant market share to limit competition, which is what the regulators will need to look at.